Our extensive research has shown that imitating the smart money can generate significant returns for retail investors, which is why we track nearly 750 active prominent money managers and analyze their quarterly 13F filings. The stocks that are heavily bought by hedge funds historically outperformed the market, though there is no shortage of high profile failures like hedge funds’ 2018 losses in Facebook and Apple. Let’s take a closer look at what the funds we track think about Edwards Lifesciences Corporation (NYSE:EW) in this article.

Is Edwards Lifesciences Corporation (NYSE:EW) an outstanding investment now? Hedge funds are taking an optimistic view. The number of long hedge fund positions improved by 8 in recent months. Our calculations also showed that EW isn’t among the 30 most popular stocks among hedge funds (see the video below). EW was in 33 hedge funds’ portfolios at the end of the second quarter of 2019. There were 25 hedge funds in our database with EW holdings at the end of the previous quarter. 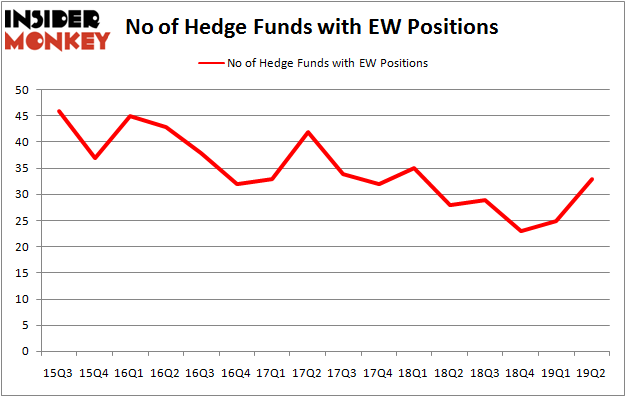 What have hedge funds been doing with Edwards Lifesciences Corporation (NYSE:EW)?

Heading into the third quarter of 2019, a total of 33 of the hedge funds tracked by Insider Monkey held long positions in this stock, a change of 32% from one quarter earlier. The graph below displays the number of hedge funds with bullish position in EW over the last 16 quarters. So, let’s find out which hedge funds were among the top holders of the stock and which hedge funds were making big moves.

Among these funds, AQR Capital Management held the most valuable stake in Edwards Lifesciences Corporation (NYSE:EW), which was worth $180.2 million at the end of the second quarter. On the second spot was OrbiMed Advisors which amassed $132.1 million worth of shares. Moreover, Healthcor Management LP, Citadel Investment Group, and Partner Fund Management were also bullish on Edwards Lifesciences Corporation (NYSE:EW), allocating a large percentage of their portfolios to this stock.

With a general bullishness amongst the heavyweights, specific money managers were leading the bulls’ herd. Healthcor Management LP, managed by Arthur B Cohen and Joseph Healey, initiated the most outsized position in Edwards Lifesciences Corporation (NYSE:EW). Healthcor Management LP had $115 million invested in the company at the end of the quarter. John Overdeck and David Siegel’s Two Sigma Advisors also made a $45.3 million investment in the stock during the quarter. The following funds were also among the new EW investors: Karim Abbadi and Edward McBride’s Centiva Capital, Perella Weinberg Partners, and Dmitry Balyasny’s Balyasny Asset Management.

As you can see these stocks had an average of 43 hedge funds with bullish positions and the average amount invested in these stocks was $4303 million. That figure was $873 million in EW’s case. Delta Air Lines, Inc. (NYSE:DAL) is the most popular stock in this table. On the other hand Sempra Energy (NYSE:SRE) is the least popular one with only 25 bullish hedge fund positions. Edwards Lifesciences Corporation (NYSE:EW) is not the least popular stock in this group but hedge fund interest is still below average. Our calculations showed that top 20 most popular stocks among hedge funds returned 24.4% in 2019 through September 30th and outperformed the S&P 500 ETF (SPY) by 4 percentage points. A small number of hedge funds were also right about betting on EW as the stock returned 19% during the same time frame and outperformed the market by an even larger margin.