Is Banco Bradesco SA (NYSE:BBD) a good investment today? Money managers are getting more optimistic. The number of bullish hedge fund positions went up by 2 recently. Our calculations also showed that BBD isn’t among the 30 most popular stocks among hedge funds. BBD was in 16 hedge funds’ portfolios at the end of the fourth quarter of 2018. There were 14 hedge funds in our database with BBD holdings at the end of the previous quarter.

At the end of the fourth quarter, a total of 16 of the hedge funds tracked by Insider Monkey held long positions in this stock, a change of 14% from the second quarter of 2018. Below, you can check out the change in hedge fund sentiment towards BBD over the last 14 quarters. So, let’s find out which hedge funds were among the top holders of the stock and which hedge funds were making big moves. 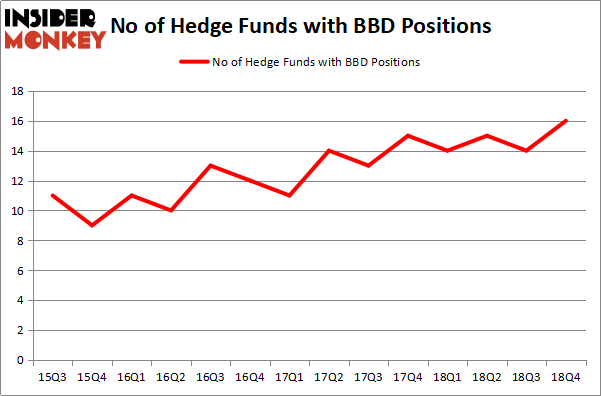 Among these funds, Fisher Asset Management held the most valuable stake in Banco Bradesco SA (NYSE:BBD), which was worth $344.2 million at the end of the third quarter. On the second spot was Capital Growth Management which amassed $141.8 million worth of shares. Moreover, GLG Partners, Prince Street Capital Management, and AQR Capital Management were also bullish on Banco Bradesco SA (NYSE:BBD), allocating a large percentage of their portfolios to this stock.

As you can see these stocks had an average of 42.75 hedge funds with bullish positions and the average amount invested in these stocks was $2672 million. That figure was $628 million in BBD’s case. Charter Communications, Inc. (NASDAQ:CHTR) is the most popular stock in this table. On the other hand 0 is the least popular one with only 9 bullish hedge fund positions. Banco Bradesco SA (NYSE:BBD) is not the least popular stock in this group and hedge fund interest is on the rise. Our calculations showed that top 15 most popular stocks among hedge funds returned 19.7% through March 15th and outperformed the S&P 500 ETF (SPY) by 6.6 percentage points. Hedge funds were also right about betting on BBD as the stock returned 20.6% and outperformed the market as well.

Itau Unibanco Holding SA (ITUB): Are Hedge Funds Right About This Stock?
Monthly Newsletter Strategy
Download a free copy of our newsletter and see the details inside!
Hedge Fund Resource Center
Related News
Do Hedge Funds Love Banco Bradesco SA (BBD)? More Hedge Funds Are Buying Into This Foreign Banking Stock 5 Stocks That “The World’s Most Bearish Hedge Fund” Actually Likes Why These 5 Stocks Are Posting Big Moves Today What Is Going On With These Falling Stocks? Brazilian Arrests Have Currency, Banco Bradesco SA (ADR) (BBD) Tumbling Why Are Stocks of Brazilian Companies Struggling Today? Ten of the Most Common Addictions 13 African Countries with the Largest White Population in 2018 6 Causes of Human Trafficking in Africa, India, and US
Billionaire Hedge Funds