We hate to say this but, we told you so. On February 27th we published an article with the title Recession is Imminent: We Need A Travel Ban NOW and predicted a US recession when the S&P 500 Index was trading at the 3150 level. We also told you to short the market and buy long-term Treasury bonds. Our article also called for a total international travel ban. While we were warning you, President Trump minimized the threat and failed to act promptly. As a result of his inaction, we will now experience a deeper recession (see why hell is coming). In these volatile markets we scrutinize hedge fund filings to get a reading on which direction each stock might be going. We at Insider Monkey have gone over 835 13F filings that hedge funds and prominent investors are required to file by the SEC The 13F filings show the funds’ and investors’ portfolio positions as of December 31st. In this article, we look at what those funds think of Avanos Medical, Inc. (NYSE:AVNS) based on that data.

Avanos Medical, Inc. (NYSE:AVNS) has seen a decrease in hedge fund sentiment lately. Our calculations also showed that AVNS isn’t among the 30 most popular stocks among hedge funds (click for Q4 rankings and see the video at the end of this article for Q3 rankings).

In the financial world there are many tools stock market investors put to use to grade publicly traded companies. A couple of the less utilized tools are hedge fund and insider trading indicators. Our experts have shown that, historically, those who follow the best picks of the top fund managers can outpace the broader indices by a healthy amount (see the details here).

We leave no stone unturned when looking for the next great investment idea. For example, Federal Reserve and other Central Banks are tripping over each other to print more money. As a result, we believe gold stocks will outperform fixed income ETFs in the long-term. So we are checking out investment opportunities like this one. We read hedge fund investor letters and listen to stock pitches at hedge fund conferences (by the way watch this video if you want to hear one of the best healthcare hedge fund manager’s coronavirus analysis). Our best call in 2020 was shorting the market when S&P 500 was trading at 3150 after realizing the coronavirus pandemic’s significance before most investors. Keeping this in mind let’s check out the key hedge fund action encompassing Avanos Medical, Inc. (NYSE:AVNS).

At the end of the fourth quarter, a total of 8 of the hedge funds tracked by Insider Monkey were bullish on this stock, a change of -43% from the previous quarter. On the other hand, there were a total of 14 hedge funds with a bullish position in AVNS a year ago. With hedgies’ positions undergoing their usual ebb and flow, there exists a few notable hedge fund managers who were upping their stakes meaningfully (or already accumulated large positions). 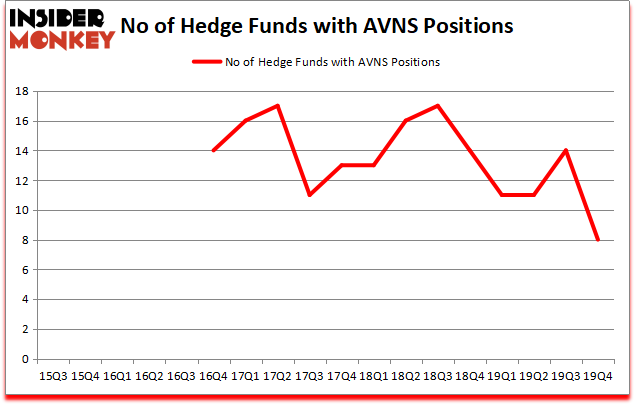 When looking at the institutional investors followed by Insider Monkey, Paradice Investment Management, managed by David Paradice, holds the largest position in Avanos Medical, Inc. (NYSE:AVNS). Paradice Investment Management has a $75 million position in the stock, comprising 5.2% of its 13F portfolio. The second largest stake is held by RGM Capital, led by Robert G. Moses, holding a $51.3 million position; 2.9% of its 13F portfolio is allocated to the stock. Remaining professional money managers with similar optimism include Jeffrey Bronchick’s Cove Street Capital, Schonfeld Strategic Advisors and Phill Gross and Robert Atchinson’s Adage Capital Management. In terms of the portfolio weights assigned to each position Paradice Investment Management allocated the biggest weight to Avanos Medical, Inc. (NYSE:AVNS), around 5.22% of its 13F portfolio. RGM Capital is also relatively very bullish on the stock, setting aside 2.93 percent of its 13F equity portfolio to AVNS.

Due to the fact that Avanos Medical, Inc. (NYSE:AVNS) has experienced a decline in interest from hedge fund managers, logic holds that there exists a select few funds who sold off their positions entirely by the end of the third quarter. At the top of the heap, Robert Joseph Caruso’s Select Equity Group cut the largest stake of the “upper crust” of funds monitored by Insider Monkey, worth close to $3.5 million in stock, and Ken Griffin’s Citadel Investment Group was right behind this move, as the fund dropped about $3.3 million worth. These moves are intriguing to say the least, as total hedge fund interest dropped by 6 funds by the end of the third quarter.

Let’s now take a look at hedge fund activity in other stocks – not necessarily in the same industry as Avanos Medical, Inc. (NYSE:AVNS) but similarly valued. We will take a look at Chesapeake Energy Corporation (NYSE:CHK), PDC Energy Inc (NASDAQ:PDCE), HNI Corp (NYSE:HNI), and CorVel Corporation (NASDAQ:CRVL). This group of stocks’ market values are closest to AVNS’s market value.

As you can see these stocks had an average of 21.25 hedge funds with bullish positions and the average amount invested in these stocks was $133 million. That figure was $151 million in AVNS’s case. PDC Energy Inc (NASDAQ:PDCE) is the most popular stock in this table. On the other hand CorVel Corporation (NASDAQ:CRVL) is the least popular one with only 14 bullish hedge fund positions. Compared to these stocks Avanos Medical, Inc. (NYSE:AVNS) is even less popular than CRVL. Hedge funds dodged a bullet by taking a bearish stance towards AVNS. Our calculations showed that the top 20 most popular hedge fund stocks returned 41.3% in 2019 and outperformed the S&P 500 ETF (SPY) by 10.1 percentage points. These stocks lost 13.0% in 2020 through April 6th but managed to beat the market by 4.2 percentage points. Unfortunately AVNS wasn’t nearly as popular as these 20 stocks (hedge fund sentiment was very bearish); AVNS investors were disappointed as the stock returned -23.6% during the same time period and underperformed the market. If you are interested in investing in large cap stocks with huge upside potential, you should check out the top 20 most popular stocks among hedge funds as most of these stocks already outperformed the market so far in 2020.