Callon Petroleum Company (NYSE:CPE) was in 12 hedge funds’ portfolios at the end of June. CPE investors should be aware of a decrease in activity from the world’s largest hedge funds of late. There were 23 hedge funds in our database with CPE holdings at the end of the previous quarter. Our calculations also showed that CPE isn’t among the 30 most popular stocks among hedge funds (see the video below).

In the financial world there are plenty of tools investors can use to analyze stocks. Two of the most innovative tools are hedge fund and insider trading sentiment. Our researchers have shown that, historically, those who follow the best picks of the best money managers can beat their index-focused peers by a significant amount (see the details here). 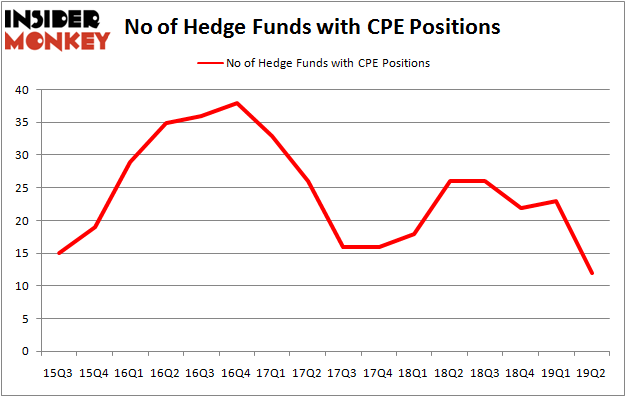 What does smart money think about Callon Petroleum Company (NYSE:CPE)?

Heading into the third quarter of 2019, a total of 12 of the hedge funds tracked by Insider Monkey held long positions in this stock, a change of -48% from the previous quarter. Below, you can check out the change in hedge fund sentiment towards CPE over the last 16 quarters. With hedgies’ sentiment swirling, there exists a few noteworthy hedge fund managers who were upping their stakes significantly (or already accumulated large positions).

Among these funds, Luminus Management held the most valuable stake in Callon Petroleum Company (NYSE:CPE), which was worth $54.3 million at the end of the second quarter. On the second spot was Fisher Asset Management which amassed $40 million worth of shares. Moreover, Cardinal Capital, AQR Capital Management, and Millennium Management were also bullish on Callon Petroleum Company (NYSE:CPE), allocating a large percentage of their portfolios to this stock.

Due to the fact that Callon Petroleum Company (NYSE:CPE) has witnessed a decline in interest from hedge fund managers, it’s safe to say that there were a few money managers that decided to sell off their positions entirely by the end of the second quarter. It’s worth mentioning that Phill Gross and Robert Atchinson’s Adage Capital Management cut the largest stake of the 750 funds tracked by Insider Monkey, totaling about $21.8 million in stock, and Noam Gottesman’s GLG Partners was right behind this move, as the fund dumped about $9.4 million worth. These bearish behaviors are important to note, as total hedge fund interest dropped by 11 funds by the end of the second quarter.

As you can see these stocks had an average of 16.25 hedge funds with bullish positions and the average amount invested in these stocks was $182 million. That figure was $166 million in CPE’s case. Papa John’s International, Inc. (NASDAQ:PZZA) is the most popular stock in this table. On the other hand James River Group Holdings Ltd (NASDAQ:JRVR) is the least popular one with only 10 bullish hedge fund positions. Callon Petroleum Company (NYSE:CPE) is not the least popular stock in this group but hedge fund interest is still below average. This is a slightly negative signal and we’d rather spend our time researching stocks that hedge funds are piling on. Our calculations showed that top 20 most popular stocks among hedge funds returned 24.4% in 2019 through September 30th and outperformed the S&P 500 ETF (SPY) by 4 percentage points. Unfortunately CPE wasn’t nearly as popular as these 20 stocks (hedge fund sentiment was quite bearish); CPE investors were disappointed as the stock returned -34.1% during the third quarter and underperformed the market. If you are interested in investing in large cap stocks with huge upside potential, you should check out the top 20 most popular stocks among hedge funds as many of these stocks already outperformed the market so far in 2019.