Were Hedge Funds Right About Snapping Up Starbucks Corporation (SBUX)?

Out of thousands of stocks that are currently traded on the market, it is difficult to identify those that will really generate strong returns. Hedge funds and institutional investors spend millions of dollars on analysts with MBAs and PhDs, who are industry experts and well connected to other industry and media insiders on top of that. Individual investors can piggyback the hedge funds employing these talents and can benefit from their vast resources and knowledge in that way. We analyze quarterly 13F filings of nearly 750 hedge funds and, by looking at the smart money sentiment that surrounds a stock, we can determine whether it has the potential to beat the market over the long-term. Therefore, let’s take a closer look at what smart money thinks about Starbucks Corporation (NASDAQ:SBUX).

Is Starbucks Corporation (NASDAQ:SBUX) a first-rate investment now? Investors who are in the know are in a bullish mood. The number of long hedge fund positions advanced by 2 in recent months. Our calculations also showed that SBUX isn’t among the 30 most popular stocks among hedge funds (see the video below). SBUX was in 49 hedge funds’ portfolios at the end of June. There were 47 hedge funds in our database with SBUX positions at the end of the previous quarter.

At the moment there are plenty of metrics stock market investors put to use to grade stocks. A pair of the most innovative metrics are hedge fund and insider trading interest. Our experts have shown that, historically, those who follow the top picks of the elite investment managers can outclass the S&P 500 by a solid margin (see the details here). 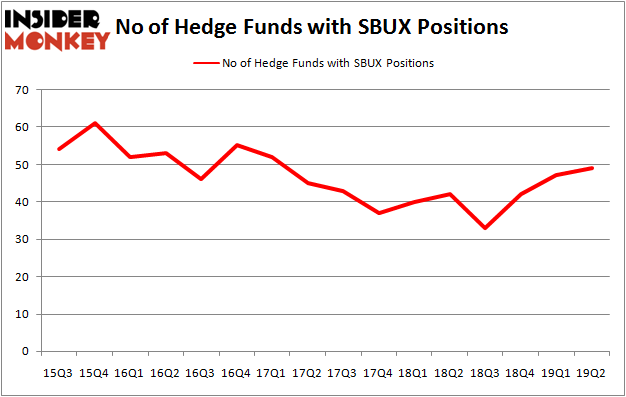 Unlike some fund managers who are betting on Dow reaching 40000 in a year, our long-short investment strategy doesn’t rely on bull markets to deliver double digit returns. We only rely on hedge fund buy/sell signals. We’re going to take a peek at the recent hedge fund action surrounding Starbucks Corporation (NASDAQ:SBUX).

At the end of the second quarter, a total of 49 of the hedge funds tracked by Insider Monkey were bullish on this stock, a change of 4% from one quarter earlier. On the other hand, there were a total of 42 hedge funds with a bullish position in SBUX a year ago. With hedgies’ sentiment swirling, there exists a select group of noteworthy hedge fund managers who were upping their holdings considerably (or already accumulated large positions).

Of the funds tracked by Insider Monkey, Andy Brown’s Cedar Rock Capital has the biggest position in Starbucks Corporation (NASDAQ:SBUX), worth close to $790.8 million, comprising 18.7% of its total 13F portfolio. Sitting at the No. 2 spot is Renaissance Technologies, which holds a $788.3 million position; 0.7% of its 13F portfolio is allocated to the company. Remaining professional money managers that are bullish consist of Bill Ackman’s Pershing Square, Peter Rathjens, Bruce Clarke and John Campbell’s Arrowstreet Capital and John Overdeck and David Siegel’s Two Sigma Advisors.

As you can see these stocks had an average of 26.75 hedge funds with bullish positions and the average amount invested in these stocks was $1353 million. That figure was $5242 million in SBUX’s case. Danaher Corporation (NYSE:DHR) is the most popular stock in this table. On the other hand PetroChina Company Limited (NYSE:PTR) is the least popular one with only 9 bullish hedge fund positions. Starbucks Corporation (NASDAQ:SBUX) is not the most popular stock in this group but hedge fund interest is still above average. Our calculations showed that top 20 most popular stocks among hedge funds returned 24.4% in 2019 through September 30th and outperformed the S&P 500 ETF (SPY) by 4 percentage points. Hedge funds were also right about betting on SBUX as the stock returned 5.9% during the third quarter and outperformed the market. Hedge funds were rewarded for their relative bullishness.