It was a rough fourth quarter for many hedge funds, which were naturally unable to overcome the big dip in the broad market, as the S&P 500 fell by about 7% during October and average hedge fund losing about 3%. The Russell 2000, composed of smaller companies, performed even worse, trailing the S&P by about 4 percentage points during the first half of Q4, as investors fled less-known quantities for safe havens. This was the case with hedge funds, who we heard were pulling money from the market amid the volatility, which included money from small-cap stocks, which they invest in at a higher rate than other investors. This action contributed to the greater decline in these stocks during the tumultuous period. We will study how this market volatility affected their sentiment towards Vanda Pharmaceuticals Inc. (NASDAQ:VNDA) during the quarter below.

Vanda Pharmaceuticals Inc. (NASDAQ:VNDA) shares haven’t seen a lot of action during the third quarter. Overall, hedge fund sentiment was unchanged. The stock was in 20 hedge funds’ portfolios at the end of the third quarter of 2018. At the end of this article we will also compare VNDA to other stocks including Viad Corp (NYSE:VVI), Amerisafe, Inc. (NASDAQ:AMSF), and Autolus Therapeutics plc (NASDAQ:AUTL) to get a better sense of its popularity.

How have hedgies been trading Vanda Pharmaceuticals Inc. (NASDAQ:VNDA)?

Heading into the fourth quarter of 2018, a total of 20 of the hedge funds tracked by Insider Monkey were long this stock, representing no change from one quarter earlier. Below, you can check out the change in hedge fund sentiment towards VNDA over the last 13 quarters. So, let’s review which hedge funds were among the top holders of the stock and which hedge funds were making big moves. 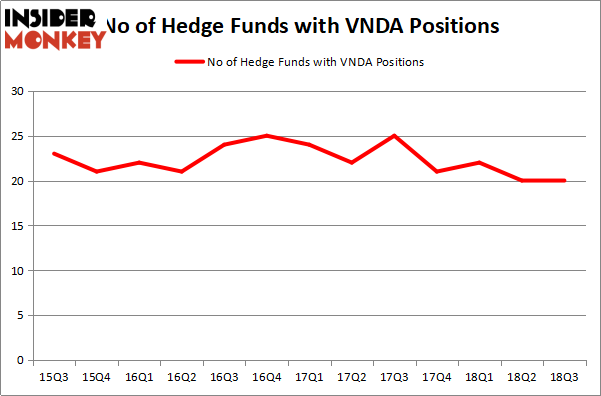 Among these funds, Consonance Capital Management held the most valuable stake in Vanda Pharmaceuticals Inc. (NASDAQ:VNDA), which was worth $102 million at the end of the third quarter. On the second spot was Palo Alto Investors which amassed $95.4 million worth of shares. Moreover, Renaissance Technologies, Adage Capital Management, and Armistice Capital were also bullish on Vanda Pharmaceuticals Inc. (NASDAQ:VNDA), allocating a large percentage of their portfolios to this stock.

Because Vanda Pharmaceuticals Inc. (NASDAQ:VNDA) has witnessed declining sentiment from the entirety of the hedge funds we track, it’s safe to say that there was a specific group of hedge funds that slashed their full holdings by the end of the third quarter. Intriguingly, Bihua Chen’s Cormorant Asset Management cut the biggest stake of the “upper crust” of funds watched by Insider Monkey, worth close to $18.2 million in stock, and Julian Baker and Felix Baker’s Baker Bros. Advisors was right behind this move, as the fund sold off about $5.9 million worth. These transactions are important to note, as aggregate hedge fund interest stayed the same (this is a bearish signal in our experience).

As you can see these stocks had an average of 10.5 hedge funds with bullish positions and the average amount invested in these stocks was $158 million. That figure was $357 million in VNDA’s case. Viad Corp (NYSE:VVI) is the most popular stock in this table. On the other hand City Holding Company (NASDAQ:CHCO) is the least popular one with only 8 bullish hedge fund positions. Compared to these stocks Vanda Pharmaceuticals Inc. (NASDAQ:VNDA) is more popular among hedge funds. Considering that hedge funds are fond of this stock in relation to its market cap peers, it may be a good idea to analyze it in detail and potentially include it in your portfolio.