A whopping number of 13F filings filed with U.S. Securities and Exchange Commission has been processed by Insider Monkey so that individual investors can look at the overall hedge fund sentiment towards the stocks included in their watchlists. These freshly-submitted public filings disclose money managers’ equity positions as of the end of the three-month period that ended June 28, so let’s proceed with the discussion of the hedge fund sentiment on United Therapeutics Corporation (NASDAQ:UTHR).

United Therapeutics Corporation (NASDAQ:UTHR) was in 30 hedge funds’ portfolios at the end of the second quarter of 2019. UTHR has experienced an increase in hedge fund sentiment lately. There were 21 hedge funds in our database with UTHR positions at the end of the previous quarter. Our calculations also showed that UTHR isn’t among the 30 most popular stocks among hedge funds (view the video below). 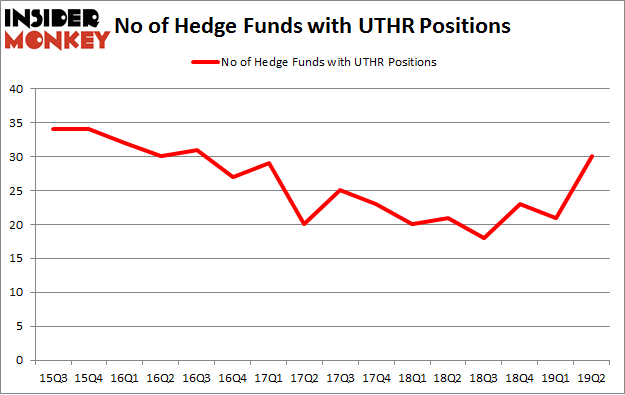 More specifically, Renaissance Technologies was the largest shareholder of United Therapeutics Corporation (NASDAQ:UTHR), with a stake worth $237.4 million reported as of the end of March. Trailing Renaissance Technologies was Millennium Management, which amassed a stake valued at $129.7 million. Palo Alto Investors, AQR Capital Management, and D E Shaw were also very fond of the stock, giving the stock large weights in their portfolios.

With a general bullishness amongst the heavyweights, key hedge funds have been driving this bullishness. Point72 Asset Management, managed by Steve Cohen, initiated the largest position in United Therapeutics Corporation (NASDAQ:UTHR). Point72 Asset Management had $35.9 million invested in the company at the end of the quarter. Stephen DuBois’s Camber Capital Management also made a $28.7 million investment in the stock during the quarter. The other funds with new positions in the stock are Steven Boyd’s Armistice Capital, Phill Gross and Robert Atchinson’s Adage Capital Management, and Paul Tudor Jones’s Tudor Investment Corp.

As you can see these stocks had an average of 17.75 hedge funds with bullish positions and the average amount invested in these stocks was $220 million. That figure was $1011 million in UTHR’s case. Verint Systems Inc. (NASDAQ:VRNT) is the most popular stock in this table. On the other hand Sabra Health Care REIT Inc (NASDAQ:SBRA) is the least popular one with only 10 bullish hedge fund positions. Compared to these stocks United Therapeutics Corporation (NASDAQ:UTHR) is more popular among hedge funds. Our calculations showed that top 20 most popular stocks among hedge funds returned 24.4% in 2019 through September 30th and outperformed the S&P 500 ETF (SPY) by 4 percentage points. Hedge funds were also right about betting on UTHR, though not to the same extent, as the stock returned 2.2% during the third quarter and outperformed the market as well.