The 700+ hedge funds and famous money managers tracked by Insider Monkey have already compiled and submitted their 13F filings for the second quarter, which unveil their equity positions as of June 28. We went through these filings, fixed typos and other more significant errors and identified the changes in hedge fund portfolios. Our extensive review of these public filings is finally over, so this article is set to reveal the smart money sentiment towards Tyson Foods, Inc. (NYSE:TSN).

Is Tyson Foods, Inc. (NYSE:TSN) a first-rate investment today? The best stock pickers are selling. The number of bullish hedge fund positions fell by 4 lately. Our calculations also showed that TSN isn’t among the 30 most popular stocks among hedge funds (see the video below). TSN was in 39 hedge funds’ portfolios at the end of June. There were 43 hedge funds in our database with TSN positions at the end of the previous quarter.

In the eyes of most investors, hedge funds are viewed as underperforming, outdated investment vehicles of the past. While there are greater than 8000 funds in operation at present, We choose to focus on the bigwigs of this group, about 750 funds. Most estimates calculate that this group of people preside over most of the hedge fund industry’s total capital, and by tracking their finest investments, Insider Monkey has unearthed many investment strategies that have historically defeated the market. Insider Monkey’s flagship hedge fund strategy outperformed the S&P 500 index by around 5 percentage points per year since its inception in May 2014. We were able to generate large returns even by identifying short candidates. Our portfolio of short stocks lost 25.7% since February 2017 (through September 30th) even though the market was up more than 33% during the same period. We just shared a list of 10 short targets in our latest quarterly update .

At the end of the second quarter, a total of 39 of the hedge funds tracked by Insider Monkey were long this stock, a change of -9% from the first quarter of 2019. Below, you can check out the change in hedge fund sentiment towards TSN over the last 16 quarters. So, let’s see which hedge funds were among the top holders of the stock and which hedge funds were making big moves. 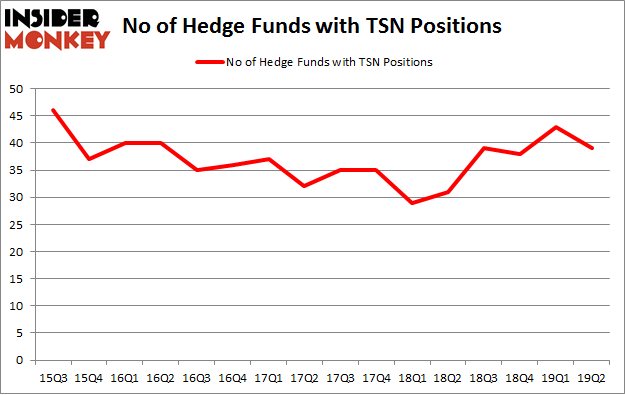 The largest stake in Tyson Foods, Inc. (NYSE:TSN) was held by AQR Capital Management, which reported holding $383.1 million worth of stock at the end of March. It was followed by Eminence Capital with a $269.4 million position. Other investors bullish on the company included Iridian Asset Management, GLG Partners, and Suvretta Capital Management.

Since Tyson Foods, Inc. (NYSE:TSN) has witnessed falling interest from the entirety of the hedge funds we track, we can see that there is a sect of money managers that slashed their positions entirely by the end of the second quarter. Intriguingly, Steve Cohen’s Point72 Asset Management dumped the biggest stake of the “upper crust” of funds watched by Insider Monkey, valued at about $124.2 million in stock, and Mark Kingdon’s Kingdon Capital was right behind this move, as the fund dropped about $15.8 million worth. These transactions are important to note, as aggregate hedge fund interest was cut by 4 funds by the end of the second quarter.

As you can see these stocks had an average of 21.5 hedge funds with bullish positions and the average amount invested in these stocks was $500 million. That figure was $1442 million in TSN’s case. Xilinx, Inc. (NASDAQ:XLNX) is the most popular stock in this table. On the other hand Perusahaan Perseroan (Persero) PT Telekomunikasi Indonesia Tbk (NYSE:TLK) is the least popular one with only 7 bullish hedge fund positions. Tyson Foods, Inc. (NYSE:TSN) is not the most popular stock in this group but hedge fund interest is still above average. Our calculations showed that top 20 most popular stocks among hedge funds returned 24.4% in 2019 through September 30th and outperformed the S&P 500 ETF (SPY) by 4 percentage points. Hedge funds were also right about betting on TSN as the stock returned 7.1% during the third quarter and outperformed the market. Hedge funds were rewarded for their relative bullishness.