The 700+ hedge funds and money managers tracked by Insider Monkey have already compiled and submitted their 13F filings for the second quarter, which unveil their equity positions as of June 30. Our extensive review of these public filings is finally over, so this article is set to reveal the smart money sentiment towards Tristate Capital Holdings Inc (NASDAQ:TSC).

Tristate Capital Holdings Inc (NASDAQ:TSC) shares weren’t highly coveted during the second quarter by hedge funds. That’s somewhat surprising given those shares had gained 20% by the end of June, when just 13 of the hedge funds that we track were Tristate shareholders. Among those selling off the stock in Q2 was billionaire Glenn Russell Dubin of Highbridge Capital, who unloaded the 18,000 shares he had just bought in Q1. As of now, playing it cautious has proven wise, as Tristate shares have fallen in the second-half of 2018. Director James Dolan took advantage of the October slide to buy 6,000 shares, expressing his confidence in Tristate and landing the company on our countdown of The 25 Biggest Insider Purchases in October. 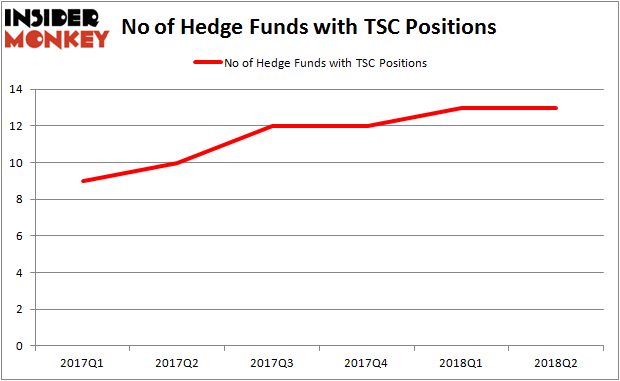 Among the funds that we track, Second Curve Capital held the most valuable stake in Tristate Capital Holdings Inc (NASDAQ:TSC), worth $26.5 million at the end of the second quarter. On the second spot was Royce & Associates, which has amassed $19.1 million worth of shares. Moreover, Castine Capital Management, ACK Asset Management, and Driehaus Capital were also bullish on Tristate Capital Holdings Inc (NASDAQ:TSC), allocating a large percentage of their portfolios to this stock.

Tristate Capital Holdings Inc (NASDAQ:TSC) has also faced some bearish sentiment from the smart money, as several hedgies slashed their entire stakes in the second quarter. As mentioned, Glenn Russell Dubin’s Highbridge Capital Management cut its stake, valued at $418,000. Dmitry Balyasny’s fund, Balyasny Asset Management, also dropped its $365,000 in stock. These moves are a valuable counterpoint to the bullishness, revealing there may be some areas of concern.

As you can see these stocks had an average of 12 hedge funds with bullish positions and the average amount invested in these stocks was $101 million. That figure was $94 million in TSC’s case. Comtech Telecomm. Corp. (NASDAQ:CMTL) is the most popular stock in this table. On the other hand Tidewater Inc. (NYSE:TDW) is the least popular one with only 9 bullish hedge fund positions. Tristate Capital Holdings Inc (NASDAQ:TSC) is not the most popular stock in this group but hedge fund interest is still above average. Given there is also bullish insider buying activity, this stock could warrant a closer look.