The fund has a dividend yield of 3.5%. Its dividends have increased at an average rate of 12.2% per year over the past five years, while its EPS growth averaged 4.4% over the same period. A little more than a fifth of the fund’s value is concentrated in the equities of utility companies. Most fund and index constituents may be viewed as good income investments. Here is a closer look at five major constituents of the noted fund and index that could be considered for dividend portfolios. 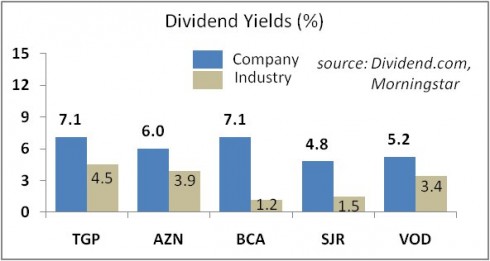 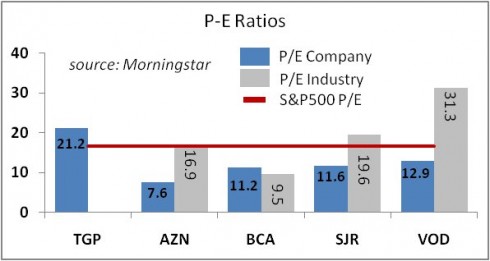 Teekay LNG Partners LP (NYSE:TGP) is a master limited partnership (MLP) providing sea transportation services for liquefied natural gas (LNG), liquefied petroleum gas (LPG), and crude oil. The MLP pays a distribution yield of 7.1%. The MLP’s peer Golar LNG Ltd. (GLNG) pays a dividend yield of 4.1%, while another competitor Frontline Ltd. (FRO) suspended its dividend in May 2012 due to financial difficulties. Teekay LNG Partners LP owns LNG carriers that have seen a steady demand over the past several years amid lower spot prices of natural gas. This contradicts the across-the-board weakness in the shipping industry. Over the past five years, TGP’s dividends grew at an average annual rate of 6.4% per year. The dividend is yielding above the average for the industry, although some raise questions about its sustainability given TGP’s weak free cash flow generation. The future outlook is positive given that some major U.S.-based natural gas companies plan to boost LNG exports as natural gas supplies boom due to the fracking revolution. The MLP has a ROE of 12.2% and a return on invested capital [ROIC] of 4.4%. On a forward P/E basis, the stock is trading at a discount to its respective industry. Among fund managers, billionaires Ken Griffin and Leon Cooperman have minor stakes in the company.

AstraZeneca Plc. (NYSE:AZN) is the second-largest British pharmaceutical company with some $59 billion in market capitalization. The stock pays a dividend yield of 6.0% on a payout ratio of 46%. Over the past five years, the company’s EPS expanded at an average rate of nearly 14% per year, while dividends increased at a rate of 10.3% annually. While the yield remains high, the future dividend growth is likely to be subdued given the expected contraction in the company’s EPS over the next five years. AstraZeneca has experienced failures in its drug development, which has set back the company’s future growth objectives. Several of its drugs, which account for 44% of the sales revenues, will lose patent protection over the next three years. Until recently, the company’s efforts have been focused on small acquisitions, dividend payouts, and stock buybacks, but with the new management team on board, the suspension of the stock repurchase program may suggest a new course in the company’s strategy. AstraZeneca’s competitors GlaxoSmithKline Plc. (NYSE:GSK), Merck & Co. (NYSE:MRK), and Pfizer (NYSE:PFE) have lower dividend yields of 4.7%, 3.7%, and 3.5%, respectively. On a forward P/E basis, the stock is trading at a major discount to its respective industry. The stock has a free cash flow yield of 5.2%, ROE of 37%, and ROIC of 27%. The stock is popular with quant king, Jim Simons, who holds almost $84 million in the stock.

CorpBanca S.A. (NYSE:BCA) is a $3.5-billion bank that provides commercial and retail banking services in Chile. The bank pays a dividend yield of 7.1% on a payout ratio of 82%. Over the past five years, the bank saw its EPS and dividends grow at average annual rates of 18.3% and 35%, respectively. CorpBanca is Chile’s fifth largest bank by revenue and fourth by loan size. It is greatly benefiting from the robust expansion in the Chilean economy, which is expected to continue in the future. The company is expanding beyond Chile’s borders, as it recently raised as much as $550 million through an equity offer to finance acquisition of the Colombian banking assets of Banco Santander (SAN). CorpBanca’s competitors Banco Santander-Chile (BSAC) and Banco de Chile (BCH) pay dividend yields of 3.2% and 3.4%, respectively. Based on the price-to-book and price-to-earnings ratios, the stock is valued slightly above the banking industry on average. The stock has a ROE of 16% and ROIC of 5.3%.

Shaw Communications Inc. (NYSE:SJR) is a $9-billion Canadian-based communications services company providing broadband cable, Internet, home phone, telecommunications services, and satellite services in Canada and the United States. The stock is yielding 4.8% on a payout ratio of 64%. Its main rival TELUS Corporation (NYSE:TU) pays a dividend yield of 3.9%. Over the past half decade, Shaw Communication’s EPS and dividends grew at average annual rates of 3.3% and 16.2%, respectively. In the next five years, EPS growth will continue to average about the same as over the past five years. Give the company’s high payout ratio, a slower pace of dividend growth should be expected. The company has been losing cable TV subscribers, while its digital TV and digital phone line customer bases have increased. On a forward P/E basis, the stock is valued below its main rival TELUS Corporation and well below the broader market. In terms of the price-to-book ratio, the stock is undervalued relative to its respective industry. Fund manager and value investor Daniel Bubis (Tetrem Capital Management—check out its top picks) holds $25 million in the stock.

Vodafone Group Plc. (NASDAQ:VOD) is a UK-based communications company and the world’s second largest mobile communications operator. It serves some 400 million customers in over 30 countries. It also owns 45% of Verizon Wireless in a joint venture with Verizon Communications (NYSE:VZ). Vodafone pays a dividend yield of 5.2% on a payout ratio of 68%. Its peers Deutsche Telekom AG (DTEGY.PK) and AT&T (NYSE:T) pay dividend yields of 7.2% and 4.7%, respectively. Rival Telefonica (TEF) suspended its dividend a few months back. Over the past five years, Vodafone’s EPS and dividends grew at average annual rates of 5.2% and 8.8%, respectively. For the next five years, the company’s EPS growth is forecast to average a higher 7.5% per year, which could suggest a sustained pace of dividend growth. The stock has been oversold due to concerns about the European debt crisis. Currently, the stock is trading at a discount to its industry, although higher than its average P/E over the past five years. The stock has a ROE of 9.0% and ROIC of 6.6%. Billionaire Jim Simons is bullish about this $141-billion global telecom giant.

Is Medtronic a Better Dividend Stock than Becton, Dickinson and Company (BDX... 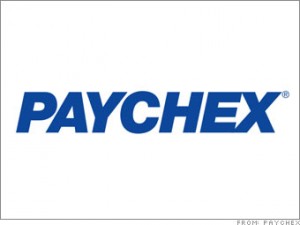 Hedge Funds Are Bullish About These Agriculture Plays