For decades, the automobile sector was dominated by a small number of well-established players. It was difficult for new entrants to grab a piece of the pie. But innovative companies such as Tesla have captured a growing segment of the auto industry by focusing on electric vehicles and autonomous driving. Tesla (NASDAQ:TSLA) still lags far behind many others in terms of sales volume and revenue. But its stock has been on a crazy ride. Here we take a look at the most valuable automakers by market capitalization to see which company sits at the top. Then we’ll check out the most valuable automobile brands. The two are very different things.

Tesla went public on June 29, 2010. It was the first US company to launch an IPO after Ford’s high profile IPO in 1956. A decade after going public, Tesla has become 7.5x more valuable than Ford. The growth in the California-based EV maker’s stock price has defied all logic.

Tesla has skyrocketed from just $220 per share in June 2019 to $1,000 in June 2020. It’s now the most valuable automaker on the planet. According to data from Refinitiv, its revenue in 2020 is projected at $31 billion. The COVID-19 pandemic will hurt the sales of Tesla as well as other automakers this year. 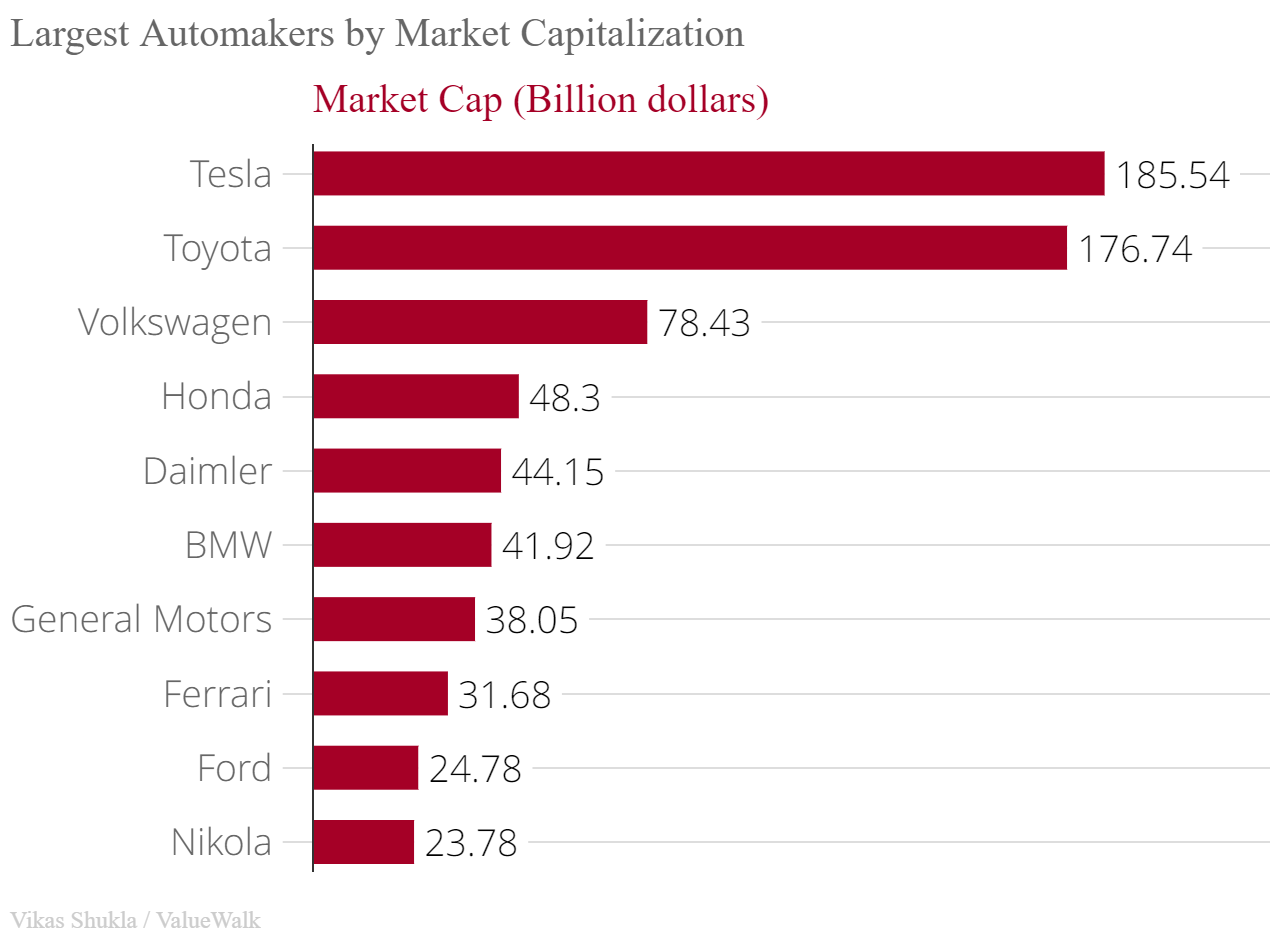 While the shares of Ford Motor Co (F) and General Motors (GM) have fallen about 30% this year so far, Tesla stock has more than doubled despite many experts questioning whether it can consistently grow its profits. Now Tesla is worth more than Volkswagen, Ford, and General Motors combined!

The Elon Musk-led EV maker is ramping up its production aggressively to meet the growing demand. It has built a Gigafactory in Shanghai with an annual production capacity of 150,000 cars. It is also setting up a Gigafactory in Berlin to serve the European markets. A recently leaked internal memo revealed that Elon Musk has asked the company employees to prepare for massive production of the electric semi trucks.

Japanese automaker Toyota (NYSE:TM) is currently valued at $174.76 billion. Volkswagen’s market cap stands at only $78.43 billion. The German car giant owns brands like Audi, Porsche, Ducati, Lamborghini, Bentley, Bugatti, and of course, Volkswagen. It sold more than 10 million cars worldwide last year. That’s an impressive turnaround for a company whose reputation was tarnished by an emissions scandal in 2015.

Italian automaker Ferrari (RACE) is the only company on the list that has a high-price, low-volume business model. It sells only about 10,000 cars a year. But thanks to its brand image and pricing power, it enjoys high profit margins. Ferrari makes some of the world’s most expensive cars. Of course, many of Volkswagen’s brands such as Lamborghini, Bentley, Bugatti have the high-price, low-volume model. But Volkswagen generates most of its revenue from mass-market vehicles.

Phoenix, Arizona-based Nikola (NKLA) went public only a few weeks ago but has become one of the world’s most valuable automakers. Its market cap has jumped to $23.78 billion, making it almost as valuable as Ford ($24.78 billion). Nikola has never produced a vehicle since its inception in 2014. But the company plans to electrify the US truck market. It has already received bulk pre-orders from a number of companies looking to use electric trucks for delivery.

Most valuable automobile brands in 2020

The UK-based brand consultancy firm Brand Finance publishes an Automotive Industry report every year, ranking the world’s most valuable automobile brands. The ranking below is based on Brand Finance’s Automotive Industry 2020 report. For the uninitiated, brand value reflects the net economic benefit the brand owner would reap by licensing it in the open market. 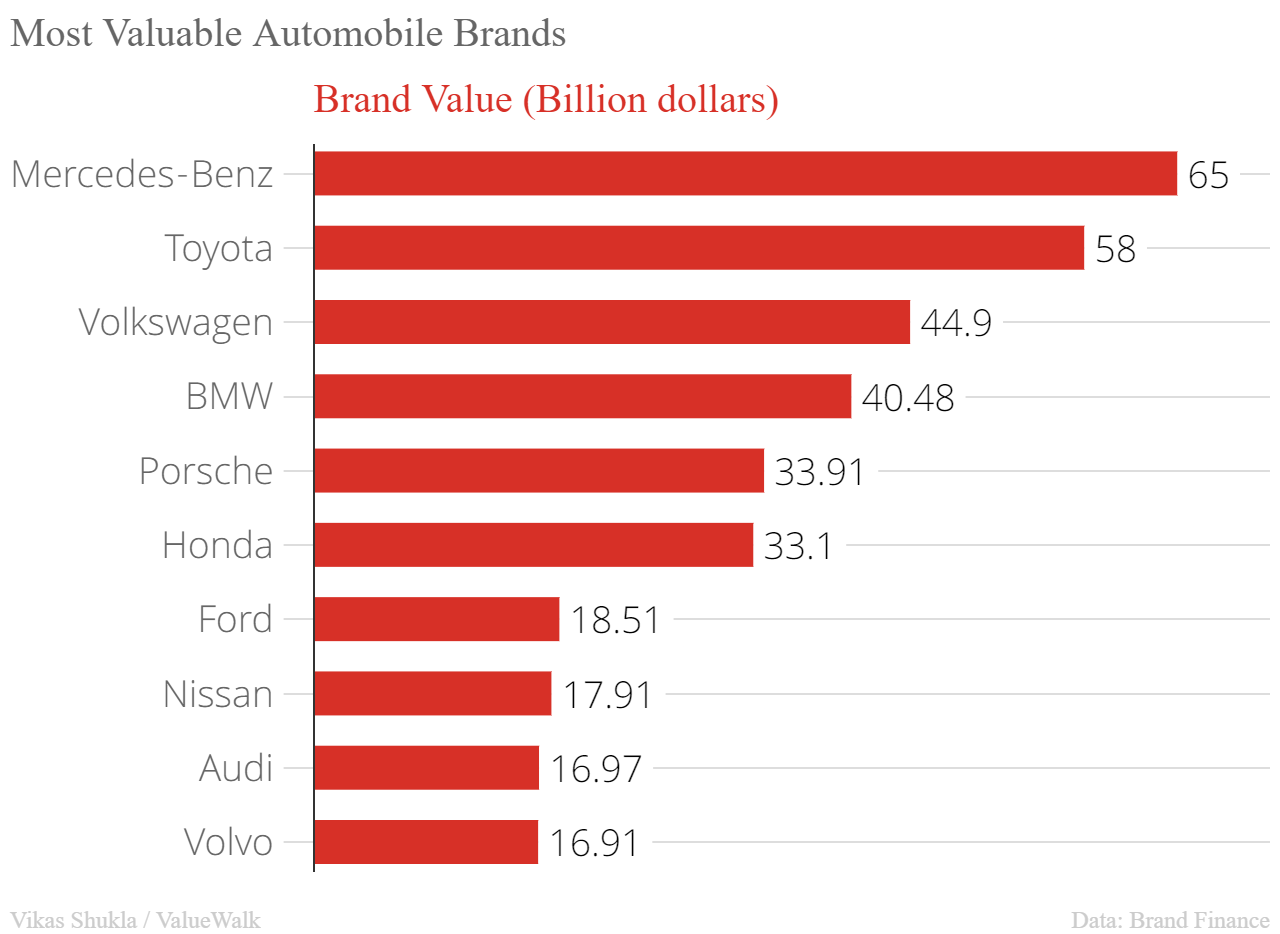 Topping the list of the most valuable automobile brands is Mercedes-Benz, which is owned by Daimler. Its brand value increased from $60.3 billion in 2019 to $65 billion this year. Brand Finance praised its customer service, R&D, and the implementation of innovative business models. Mercedes is investing heavily in electric and autonomous vehicles. Its main competitor BMW has a brand value of $40.48 billion.

Toyota occupies the second spot with $58 billion in brand value, up 11.1% from last year. Volkswagen is close behind at $44.9 billion. Audi witnessed a 13.6% drop in brand value while Nissan registered a 4.5% decline compared to last year. Swedish automaker Volvo’s brand value rose an impressive 20.3% to $16.91 billion.