This Is What Hedge Funds Think About Glaukos Corporation (GKOS)

Glaukos Corporation (NYSE:GKOS) investors should pay attention to an increase in activity from the world’s largest hedge funds recently. Our calculations also showed that GKOS isn’t among the 30 most popular stocks among hedge funds.

Heading into the second quarter of 2019, a total of 15 of the hedge funds tracked by Insider Monkey were bullish on this stock, a change of 36% from the previous quarter. Below, you can check out the change in hedge fund sentiment towards GKOS over the last 15 quarters. With hedge funds’ capital changing hands, there exists a few notable hedge fund managers who were adding to their holdings substantially (or already accumulated large positions). 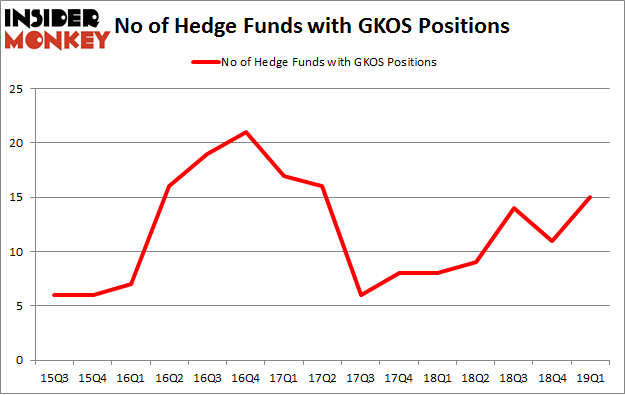 According to Insider Monkey’s hedge fund database, Deerfield Management, managed by James E. Flynn, holds the biggest position in Glaukos Corporation (NYSE:GKOS). Deerfield Management has a $17.9 million position in the stock, comprising 0.7% of its 13F portfolio. On Deerfield Management’s heels is D. E. Shaw of D E Shaw, with a $16.2 million position; less than 0.1%% of its 13F portfolio is allocated to the stock. Other peers that are bullish comprise Brian Ashford-Russell and Tim Woolley’s Polar Capital, Jim Simons’s Renaissance Technologies and Richard Driehaus’s Driehaus Capital.

With a general bullishness amongst the heavyweights, some big names have been driving this bullishness. Polar Capital, managed by Brian Ashford-Russell and Tim Woolley, created the most valuable position in Glaukos Corporation (NYSE:GKOS). Polar Capital had $10.6 million invested in the company at the end of the quarter. Dmitry Balyasny’s Balyasny Asset Management also made a $2.8 million investment in the stock during the quarter. The other funds with new positions in the stock are Noam Gottesman’s GLG Partners, Benjamin A. Smith’s Laurion Capital Management, and Steve Cohen’s Point72 Asset Management.

As you can see these stocks had an average of 23.25 hedge funds with bullish positions and the average amount invested in these stocks was $321 million. That figure was $69 million in GKOS’s case. Yelp Inc (NYSE:YELP) is the most popular stock in this table. On the other hand Guangshen Railway Company Limited (NYSE:GSH) is the least popular one with only 1 bullish hedge fund positions. Glaukos Corporation (NYSE:GKOS) is not the least popular stock in this group but hedge fund interest is still below average. This is a slightly negative signal and we’d rather spend our time researching stocks that hedge funds are piling on. Our calculations showed that top 20 most popular stocks among hedge funds returned 6.2% in Q2 through June 19th and outperformed the S&P 500 ETF (SPY) by nearly 3 percentage points. Unfortunately GKOS wasn’t nearly as popular as these 20 stocks (hedge fund sentiment was quite bearish); GKOS investors were disappointed as the stock returned -0.5% during the same time period and underperformed the market. If you are interested in investing in large cap stocks with huge upside potential, you should check out the top 20 most popular stocks among hedge funds as 13 of these stocks already outperformed the market so far in Q2.