The 700+ hedge funds and money managers tracked by Insider Monkey have already compiled and submitted their 13F filings for the second quarter, which unveil their equity positions as of September 30. We went through these filings, fixed typos and other more significant errors and identified the changes in hedge fund positions. Our extensive review of these public filings is finally over, so this article is set to reveal the smart money sentiment towards Glaukos Corporation (NYSE:GKOS).

Glaukos Corporation (NYSE:GKOS) has experienced an increase in hedge fund sentiment recently. Our calculations also showed that gkos isn’t among the 30 most popular stocks among hedge funds.

In the eyes of most market participants, hedge funds are viewed as underperforming, old financial tools of the past. While there are more than 8,000 funds trading at present, Our researchers hone in on the moguls of this club, about 700 funds. These money managers have their hands on the lion’s share of all hedge funds’ total capital, and by watching their highest performing stock picks, Insider Monkey has formulated many investment strategies that have historically exceeded Mr. Market. Insider Monkey’s flagship hedge fund strategy outperformed the S&P 500 index by 6 percentage points per annum since its inception in May 2014 through early November 2018. We were able to generate large returns even by identifying short candidates. Our portfolio of short stocks lost 24% since February 2017 (through December 3rd) even though the market was up nearly 23% during the same period. We just shared a list of 11 short targets in our latest quarterly update. 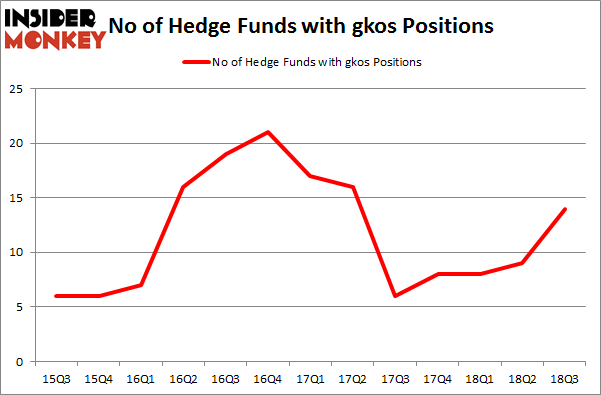 The largest stake in Glaukos Corporation (NYSE:GKOS) was held by Renaissance Technologies, which reported holding $37.1 million worth of stock at the end of September. It was followed by Deerfield Management with a $37 million position. Other investors bullish on the company included Millennium Management, D E Shaw, and Balyasny Asset Management.

As aggregate interest increased, specific money managers have been driving this bullishness. Millennium Management, managed by Israel Englander, initiated the most outsized position in Glaukos Corporation (NYSE:GKOS). Millennium Management had $32 million invested in the company at the end of the quarter. D. E. Shaw’s D E Shaw also made a $17.2 million investment in the stock during the quarter. The other funds with new positions in the stock are Steve Cohen’s Point72 Asset Management, Justin John Ferayorni’s Tamarack Capital Management, and Matthew Hulsizer’s PEAK6 Capital Management.

As you can see these stocks had an average of 14.5 hedge funds with bullish positions and the average amount invested in these stocks was $280 million. That figure was $155 million in GKOS’s case. Amicus Therapeutics, Inc. (NASDAQ:FOLD) is the most popular stock in this table. On the other hand Transportadora de Gas del Sur SA (NYSE:TGS) is the least popular one with only 9 bullish hedge fund positions. Glaukos Corporation (NYSE:GKOS) is not the least popular stock in this group but hedge fund interest is still below average. This is a slightly negative signal and we’d rather spend our time researching stocks that hedge funds are piling on. In this regard FOLD might be a better candidate to consider a long position.