Waters Corporation (NYSE:WAT) was in 26 hedge funds’ portfolios at the end of June. WAT has experienced a decrease in support from the world’s most elite money managers lately. There were 30 hedge funds in our database with WAT positions at the end of the previous quarter. Our calculations also showed that WAT isn’t among the 30 most popular stocks among hedge funds.

How have hedgies been trading Waters Corporation (NYSE:WAT)? 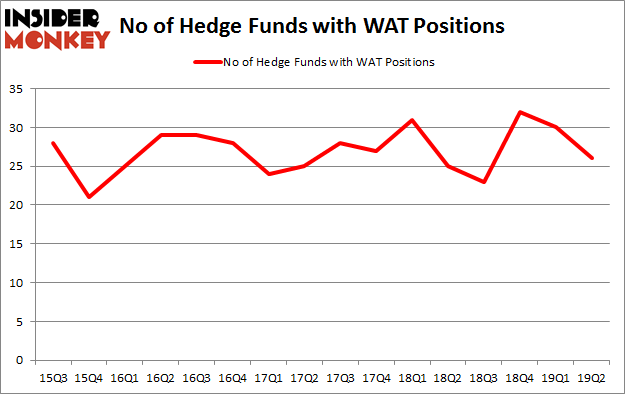 According to Insider Monkey’s hedge fund database, Renaissance Technologies holds the number one position in Waters Corporation (NYSE:WAT). Renaissance Technologies has a $102.9 million position in the stock, comprising 0.1% of its 13F portfolio. Sitting at the No. 2 spot is GLG Partners, led by Noam Gottesman, holding a $85.3 million position; 0.3% of its 13F portfolio is allocated to the company. Remaining members of the smart money that are bullish contain Ian Simm’s Impax Asset Management, David Blood and Al Gore’s Generation Investment Management and Cliff Asness’s AQR Capital Management.

Because Waters Corporation (NYSE:WAT) has experienced falling interest from the smart money, it’s easy to see that there was a specific group of hedge funds that decided to sell off their entire stakes last quarter. Interestingly, Ernest Chow and Jonathan Howe’s Sensato Capital Management sold off the largest investment of all the hedgies monitored by Insider Monkey, worth close to $8 million in stock. Paul Tudor Jones’s fund, Tudor Investment Corp, also dropped its stock, about $3.7 million worth. These moves are important to note, as total hedge fund interest dropped by 4 funds last quarter.

As you can see these stocks had an average of 34.25 hedge funds with bullish positions and the average amount invested in these stocks was $1392 million. That figure was $603 million in WAT’s case. BioMarin Pharmaceutical Inc. (NASDAQ:BMRN) is the most popular stock in this table. On the other hand Xylem Inc (NYSE:XYL) is the least popular one with only 19 bullish hedge fund positions. Waters Corporation (NYSE:WAT) is not the least popular stock in this group but hedge fund interest is still below average. Our calculations showed that top 20 most popular stocks (see the video below) among hedge funds returned 24.4% in 2019 through September 30th and outperformed the S&P 500 ETF (SPY) by 4 percentage points. A small number of hedge funds were also right about betting on WAT, though not to the same extent, as the stock returned 3.7% during the third quarter and outperformed the market.