Insider Monkey finished processing more than 700 13F filings made by hedge funds and prominent investors. These filings show these funds’ portfolio positions as of June 30. In this article we are going to take a look at smart money sentiment towards The Liberty SiriusXM Group (NASDAQ:LSXMK).

Liberty SiriusXM is one of the least volatile stocks out there in terms of hedge fund ownership. It has a loyal collection of shareholders that includes Warren Buffett, the 3rd richest person in the world with an immense fortune of $86 billion according to Forbes. And Buffett isn’t the only billionaire to love Liberty SiriusXM, as it easily made our list of the 25 Stocks Billionaires Are Piling On. Nor is Buffett only invested in Liberty; he was also in discussions with Liberty Media’s billionaire majority owner and chairman John Malone on a possible joint investment in Sprint Corp (NYSE:S), though nothing appears to have materialized from those talks as of yet.

What does the smart money think about The Liberty SiriusXM Group (NASDAQ:LSXMK)?

At the end of the third quarter, a total of 44 of the hedge funds tracked by Insider Monkey held long positions in this stock, a rise of 7% from the previous quarter. Below, you can check out the change in hedge fund sentiment towards LSXMK over the last 6 quarters, during which no more than 44 hedge funds and no fewer than 41 have owned the stock. 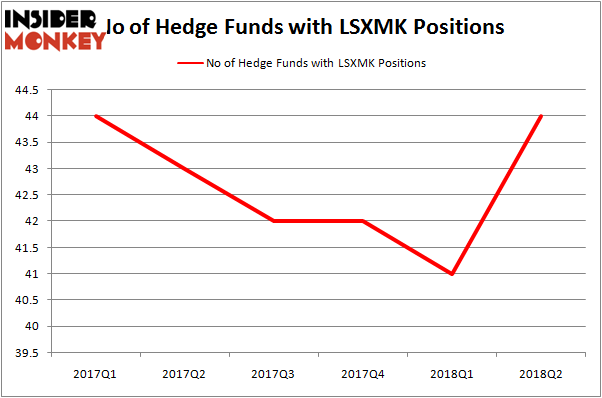 Warren Buffett’s Berkshire Hathaway was the largest shareholder of The Liberty SiriusXM Group (NASDAQ:LSXMK), with a stake worth $1.41 billion reported as of the end of June. Trailing Berkshire Hathaway was Kensico Capital, which had amassed a stake valued at $355.5 million. Chieftain Capital, FPR Partners, and Swift Run Capital Management were also very fond of the stock, giving the stock large weighting in their 13F portfolios.

Let’s go over hedge fund activity in other stocks – not necessarily in the same industry as The Liberty SiriusXM Group(NASDAQ:LSXMK) but similarly valued. We will take a look at The Liberty SiriusXM Group (NASDAQ:LSXMA), L-3 Communications Holdings, Inc. (NYSE:LLL), Celanese Corporation (NYSE:CE), and Markel Corporation (NYSE:MKL). All of these stocks’ market caps resemble LSXMK’s market cap.

As you can see these stocks had an average of 27 hedge funds with bullish positions and the average amount invested in these stocks was $1.16 billion. That figure was $3.54 billion in LSXMK’s case. The Liberty SiriusXM Group (NASDAQ:LSXMA) is the most popular stock in this table. On the other hand Markel Corporation (NYSE:MKL) is the least popular one with only 16 bullish hedge fund positions. Compared to these stocks The Liberty SiriusXM Group (NASDAQ:LSXMK) is more popular among hedge funds. Considering that hedge funds and billionaire money managers like the Oracle of Omaha are big fans of this stock, it may be a good idea to analyze it in detail and potentially include it in your portfolio.