Is Vulcan Materials Company (NYSE:VMC) a good place to invest some of your money right now? We can gain invaluable insight to help us answer that question by studying the investment trends of top investors, who employ world-class Ivy League graduates, who are given immense resources and industry contacts to put their financial expertise to work. The top picks of these firms have historically outperformed the market when we account for known risk factors, making them very valuable investment ideas.

Is Vulcan Materials Company (NYSE:VMC) an exceptional investment today? Hedge funds are in an optimistic mood. The number of long hedge fund bets improved by 1 in recent months. Our calculations also showed that vmc isn’t among the 30 most popular stocks among hedge funds. 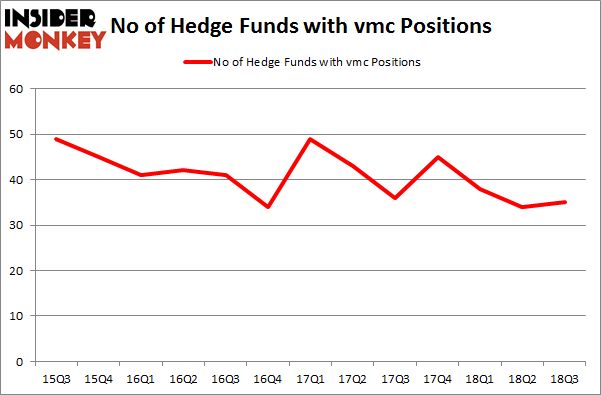 The largest stake in Vulcan Materials Company (NYSE:VMC) was held by Eminence Capital, which reported holding $338.7 million worth of stock at the end of September. It was followed by Soroban Capital Partners with a $173 million position. Other investors bullish on the company included Citadel Investment Group, Millennium Management, and Interval Partners.

Consequently, specific money managers were breaking ground themselves. Soroban Capital Partners, managed by Eric W. Mandelblatt and Gaurav Kapadia, assembled the most outsized position in Vulcan Materials Company (NYSE:VMC). Soroban Capital Partners had $173 million invested in the company at the end of the quarter. Keith Meister’s Corvex Capital also made a $39.8 million investment in the stock during the quarter. The other funds with new positions in the stock are John Khoury’s Long Pond Capital, Alexander Mitchell’s Scopus Asset Management, and Ian Simm’s Impax Asset Management.

As you can see these stocks had an average of 31.75 hedge funds with bullish positions and the average amount invested in these stocks was $1.70 billion. That figure was $1.34 billion in VMC’s case. Incyte Corporation (NASDAQ:INCY) is the most popular stock in this table. On the other hand Entergy Corporation (NYSE:ETR) is the least popular one with only 27 bullish hedge fund positions. Vulcan Materials Company (NYSE:VMC) is not the most popular stock in this group but hedge fund interest is still above average. This is a slightly positive signal but we’d rather spend our time researching stocks that hedge funds are piling on. In this regard INCY might be a better candidate to consider a long position.

Northern Trust Corporation (NTRS)Hedge Funds Are Snapping Up
Monthly Newsletter Strategy
Download a free copy of our newsletter and see the details inside!
Hedge Fund Resource Center
Related News
5 Best Airport and Infrastructure Stocks To Buy Under President Trump Vulcan Materials Company (VMC): Are Hedge Funds Right About This Stock? Why Toyota, IBM, Teva, and Two Other Stocks Are in Spotlight Today Why Are These Five Stocks on Investors’ Radars Today? Hedge Funds Are Buying These 10 Mid-Caps, Part 1 What Do Hedge Funds Think of Vulcan Materials Company (VMC)? Which Sectors Offer Breaks According to This Billionaire Investor? The 10 Best Islands to Visit in 2019 5 Most Socially Responsible Companies in America 5 Ways You Can Eliminate Credit Card Debt
Billionaire Hedge Funds