Is Paypal Holdings Inc (NASDAQ:PYPL) a good stock to buy right now? We at Insider Monkey like to examine what billionaires and hedge funds think of a company before doing days of research on it. Given their 2 and 20 payment structure, hedge funds have more resources than the average investor. The funds have access to expert networks and get tips from industry insiders. They also have numerous Ivy League graduates and MBAs. Like everyone else, hedge funds perform miserably at times, but their consensus picks have historically outperformed the market after risk adjustments. 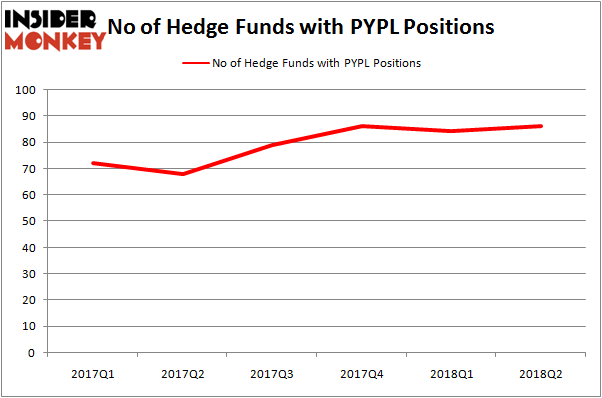 According to Insider Monkey’s hedge fund database, Third Point, managed by Dan Loeb, holds the largest position in Paypal Holdings Inc (NASDAQ:PYPL). Third Point has a $832.7 million position in the stock, comprising 5.8% of its 13F portfolio. The second largest stake is held by Philippe Laffont of Coatue Management, with a $533.3 million position; the fund has 4.5% of its 13F portfolio invested in the stock. Remaining professional money managers that are bullish contain Jim O’Brien and Jonathan Dorfman’s Napier Park Global Capital, Beeneet Kothari’s Tekne Capital Management and Yen Liow’s Aravt Global.

As you can see these stocks had an average of 41.5 hedge funds with bullish positions and the average amount invested in these stocks was $2612 million. That figure was $4904 million in PYPL’s case. Booking Holdings Inc. (NASDAQ:BKNG) is the most popular stock in this table. On the other hand Rio Tinto plc (ADR) (NYSE:RIO) is the least popular one with only 20 bullish hedge fund positions. Compared to these stocks Paypal Holdings Inc (NASDAQ:PYPL) is more popular among hedge funds.

At the beginning of this year we identified Paypal as one of the 5 stocks that were favored both by insiders and hedge funds, and the stock outperformed the market. Considering that hedge funds are still fond of this stock in relation to its market cap peers, it may be a good idea to analyze it in detail and potentially include it in your portfolio.

Best Performing Hedge Funds Strategy
Download a free copy of our newsletter and see the details inside!
Hedge Fund Resource Center
Related News
25 Most Popular Stocks Among Hedge Funds in 2018 This Cryptocurrency Can Cause PayPal and Square Serious Headache 5 Stocks Insiders and Hedge Funds Are Crazy About 25 Big Companies That Accept Bitcoin, Ethereum and Other Cryptocurrencies Icahn Capital Adds Conduent (CNDT) to Its 13F Portfolio; Plus Billionaire Activist’s Other Top Q1 Moves 17 Companies That Accept Bitcoin 37 Fresh Stories Summarizing What’s Going On in the Finance World Today 5 Ways You Can Eliminate Credit Card Debt 10 Easiest Road Test Sites in NY and NJ 10 Hottest Selling Products in the USA in 2018
Billionaire Hedge Funds