Should You Buy Meredith Corporation (MDP)?

Meredith Corporation (NYSE:MDP) has experienced an increase in enthusiasm from smart money lately. MDP was in 17 hedge funds’ portfolios at the end of the third quarter of 2018. There were 12 hedge funds in our database with MDP positions at the end of the previous quarter. Our calculations also showed that mdp isn’t among the 30 most popular stocks among hedge funds.

At Q3’s end, a total of 17 of the hedge funds tracked by Insider Monkey were bullish on this stock, a change of 42% from the previous quarter. On the other hand, there were a total of 12 hedge funds with a bullish position in MDP at the beginning of this year. With the smart money’s sentiment swirling, there exists a few key hedge fund managers who were adding to their stakes meaningfully (or already accumulated large positions). 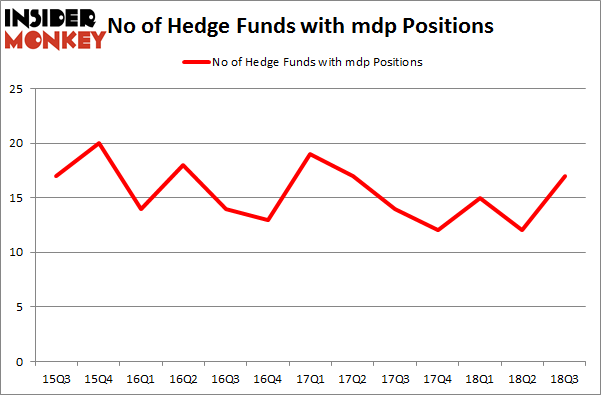 According to publicly available hedge fund and institutional investor holdings data compiled by Insider Monkey, Chuck Royce’s Royce & Associates has the largest position in Meredith Corporation (NYSE:MDP), worth close to $115 million, comprising 0.8% of its total 13F portfolio. The second largest stake is held by Ariel Investments, managed by John W. Rogers, which holds a $71.7 million position; the fund has 0.8% of its 13F portfolio invested in the stock. Some other hedge funds and institutional investors that are bullish include Robert Joseph Caruso’s Select Equity Group, Parag Vora’s HG Vora Capital Management and Michael Price’s MFP Investors.

Consequently, some big names were breaking ground themselves. BlueCrest Capital Mgmt., managed by Michael Platt and William Reeves, initiated the biggest position in Meredith Corporation (NYSE:MDP). BlueCrest Capital Mgmt. had $0.3 million invested in the company at the end of the quarter. Matthew Hulsizer’s PEAK6 Capital Management also made a $0.3 million investment in the stock during the quarter. The other funds with new positions in the stock are Noam Gottesman’s GLG Partners, Israel Englander’s Millennium Management, and Ben Levine, Andrew Manuel and Stefan Renold’s LMR Partners.

As you can see these stocks had an average of 18 hedge funds with bullish positions and the average amount invested in these stocks was $159 million. That figure was $311 million in MDP’s case. Callaway Golf Company (NYSE:ELY) is the most popular stock in this table. On the other hand BEST Inc. (NYSE:BSTI) is the least popular one with only 12 bullish hedge fund positions. Meredith Corporation (NYSE:MDP) is not the least popular stock in this group but hedge fund interest is still below average. This is a slightly negative signal and we’d rather spend our time researching stocks that hedge funds are piling on. In this regard ELY might be a better candidate to consider a long position.