Should You Buy Humana Inc (HUM)?

The Insider Monkey team has completed processing the quarterly 13F filings for the June quarter submitted by the hedge funds and other money managers included in our extensive database. Most hedge fund investors experienced strong gains on the back of a strong market performance, which certainly propelled them to adjust their equity holdings so as to maintain the desired risk profile. As a result, the relevancy of these public filings and their content is indisputable, as they may reveal numerous high-potential stocks. The following article will discuss the smart money sentiment towards Humana Inc (NYSE:HUM).

Humana Inc (NYSE:HUM) investors should pay attention to an increase in hedge fund sentiment lately. Our calculations also showed that HUM isn’t among the 30 most popular stocks among hedge funds.

Unlike some fund managers who are betting on Dow reaching 40000 in a year, our long-short investment strategy doesn’t rely on bull markets to deliver double digit returns. We only rely on hedge fund buy/sell signals. Let’s go over the latest hedge fund action regarding Humana Inc (NYSE:HUM).

What have hedge funds been doing with Humana Inc (NYSE:HUM)?

At Q2’s end, a total of 62 of the hedge funds tracked by Insider Monkey were long this stock, a change of 48% from the first quarter of 2019. Below, you can check out the change in hedge fund sentiment towards HUM over the last 16 quarters. With hedge funds’ capital changing hands, there exists an “upper tier” of notable hedge fund managers who were adding to their stakes substantially (or already accumulated large positions). 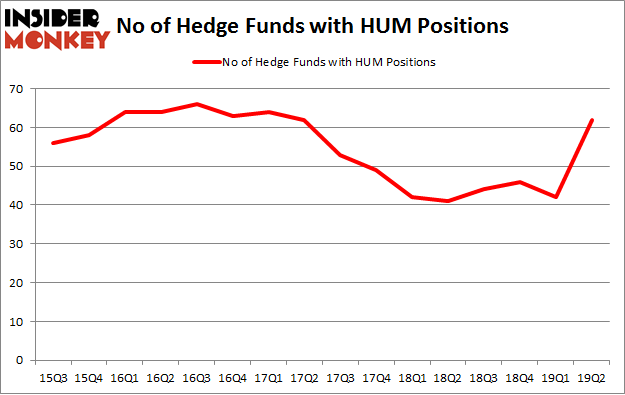 More specifically, Renaissance Technologies was the largest shareholder of Humana Inc (NYSE:HUM), with a stake worth $780 million reported as of the end of March. Trailing Renaissance Technologies was Glenview Capital, which amassed a stake valued at $466.2 million. Maverick Capital, AQR Capital Management, and Two Sigma Advisors were also very fond of the stock, giving the stock large weights in their portfolios.

With a general bullishness amongst the heavyweights, specific money managers have been driving this bullishness. Point State Capital, managed by Zach Schreiber, established the largest position in Humana Inc (NYSE:HUM). Point State Capital had $180.5 million invested in the company at the end of the quarter. Steve Cohen’s Point72 Asset Management also initiated a $115.7 million position during the quarter. The following funds were also among the new HUM investors: OZ Management, Ric Dillon’s Diamond Hill Capital, and Jeffrey Altman’s Owl Creek Asset Management.

Let’s go over hedge fund activity in other stocks – not necessarily in the same industry as Humana Inc (NYSE:HUM) but similarly valued. We will take a look at eBay Inc (NASDAQ:EBAY), Regeneron Pharmaceuticals Inc (NASDAQ:REGN), Eaton Corporation plc (NYSE:ETN), and V.F. Corporation (NYSE:VFC). All of these stocks’ market caps are similar to HUM’s market cap.