Is Spirit MTA REIT (NYSE:SMTA) a good stock to buy now? The smart money is taking a pessimistic view. The number of long hedge fund positions were trimmed by 2 in recent months. Our calculations also showed that SMTA isn’t among the 30 most popular stocks among hedge funds (see the video below). 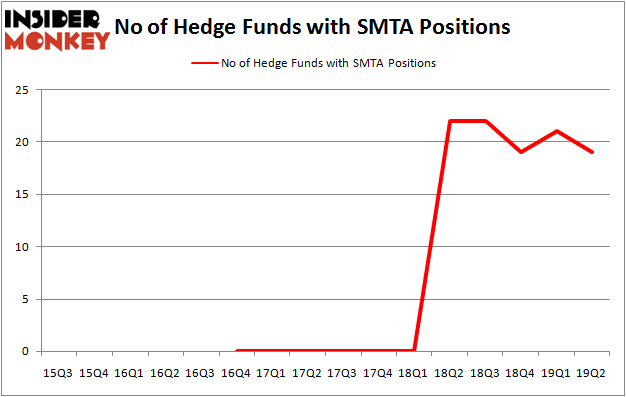 Unlike other investors who track every movement of the 25 largest hedge funds, our long-short investment strategy relies on hedge fund buy/sell signals given by the 100 best performing hedge funds. We’re going to view the recent hedge fund action regarding Spirit MTA REIT (NYSE:SMTA).

Heading into the third quarter of 2019, a total of 19 of the hedge funds tracked by Insider Monkey were long this stock, a change of -10% from the previous quarter. On the other hand, there were a total of 22 hedge funds with a bullish position in SMTA a year ago. With the smart money’s positions undergoing their usual ebb and flow, there exists a select group of notable hedge fund managers who were upping their holdings significantly (or already accumulated large positions).

Judging by the fact that Spirit MTA REIT (NYSE:SMTA) has experienced declining sentiment from the smart money, it’s safe to say that there lies a certain “tier” of hedge funds that elected to cut their entire stakes in the second quarter. Intriguingly, Peter Algert and Kevin Coldiron’s Algert Coldiron Investors dumped the largest stake of the “upper crust” of funds tracked by Insider Monkey, totaling an estimated $0.4 million in stock, and Jeffrey Talpins’s Element Capital Management was right behind this move, as the fund dropped about $0.3 million worth. These transactions are important to note, as aggregate hedge fund interest fell by 2 funds in the second quarter.

As you can see these stocks had an average of 11.25 hedge funds with bullish positions and the average amount invested in these stocks was $87 million. That figure was $113 million in SMTA’s case. Care.com Inc (NYSE:CRCM) is the most popular stock in this table. On the other hand Red River Bancshares, Inc. (NASDAQ:RRBI) is the least popular one with only 3 bullish hedge fund positions. Spirit MTA REIT (NYSE:SMTA) is not the most popular stock in this group but hedge fund interest is still above average. This is a slightly positive signal but we’d rather spend our time researching stocks that hedge funds are piling on. Our calculations showed that top 20 most popular stocks among hedge funds returned 24.4% in 2019 through September 30th and outperformed the S&P 500 ETF (SPY) by 4 percentage points. Unfortunately SMTA wasn’t nearly as popular as these 20 stocks and hedge funds that were betting on SMTA were disappointed as the stock returned 1.2% during the third quarter and underperformed the market. If you are interested in investing in large cap stocks with huge upside potential, you should check out the top 20 most popular stocks among hedge funds as many of these stocks already outperformed the market so far this year.