Insider Monkey has processed numerous 13F filings of hedge funds and famous investors to create an extensive database of hedge fund holdings. The 13F filings show the hedge funds and investors’ positions as of the end of the third quarter. You can find write-ups about an individual hedge fund’s trades on numerous financial news websites. However, in this article we will take a look at their collective moves and analyze what the smart money thinks of Spirit MTA REIT (NYSE:SMTA) based on that data.

Spirit MTA REIT (NYSE:SMTA) shares haven’t seen a lot of action during the third quarter. Overall, hedge fund sentiment was unchanged. The stock was in 22 hedge funds’ portfolios at the end of the third quarter of 2018. The level and the change in hedge fund popularity aren’t the only variables you need to analyze to decipher hedge funds’ perspectives. A stock may witness a boost in popularity but it may still be less popular than similarly priced stocks. That’s why at the end of this article we will examine companies such as CONSOL Coal Resources LP (NYSE:CCR), Five Prime Therapeutics Inc (NASDAQ:FPRX), and to gather more data points. 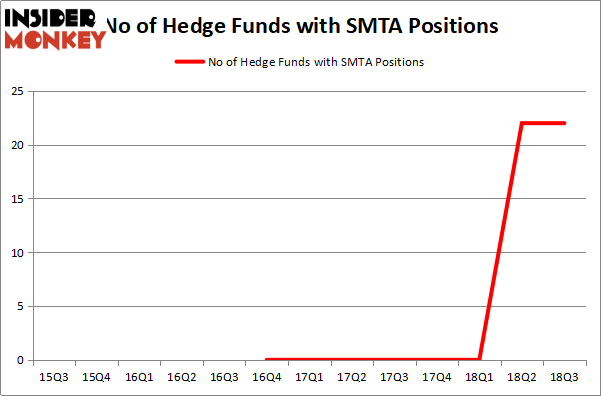 Seeing as Spirit MTA REIT (NYSE:SMTA) has experienced declining sentiment from the aggregate hedge fund industry, logic holds that there were a few money managers who sold off their positions entirely in the third quarter. Intriguingly, Dmitry Balyasny’s Balyasny Asset Management dropped the largest stake of the “upper crust” of funds watched by Insider Monkey, valued at about $0.3 million in stock. Frederick DiSanto’s fund, Ancora Advisors, also dumped its stock, about $0.3 million worth. These bearish behaviors are important to note, as aggregate hedge fund interest stayed the same (this is a bearish signal in our experience).

As you can see these stocks had an average of 8 hedge funds with bullish positions and the average amount invested in these stocks was $78 million. That figure was $162 million in SMTA’s case. Five Prime Therapeutics Inc (NASDAQ:FPRX) is the most popular stock in this table. On the other hand Carter Bank & Trust (CARE) is the least popular one with only 1 bullish hedge fund positions. Compared to these stocks Spirit MTA REIT (NYSE:SMTA) is more popular among hedge funds. Considering that hedge funds are fond of this stock in relation to its market cap peers, it may be a good idea to analyze it in detail and potentially include it in your portfolio.