Hedge funds are known to underperform the bull markets but that’s not because they are bad at investing. Truth be told, most hedge fund managers and other smaller players within this industry are very smart and skilled investors. Of course, they may also make wrong bets in some instances, but no one knows what the future holds and how market participants will react to the bountiful news that floods in each day. Hedge funds underperform because they are hedged. The Standard and Poor’s 500 Index ETFs returned approximately 27.5% through the end of November (including dividend payments). Conversely, hedge funds’ top 20 large-cap stock picks generated a return of 37.4% during the same period. An average long/short hedge fund returned only a fraction of this due to the hedges they implement and the large fees they charge. Our research covering the last 18 years indicates that investors can outperform the market by imitating hedge funds’ consensus stock picks rather than directly investing in hedge funds. That’s why we believe it isn’t a waste of time to check out hedge fund sentiment before you invest in a stock like Profire Energy, Inc. (NASDAQ:PFIE).

Profire Energy, Inc. (NASDAQ:PFIE) has seen a decrease in hedge fund sentiment of late. PFIE was in 8 hedge funds’ portfolios at the end of September. There were 9 hedge funds in our database with PFIE holdings at the end of the previous quarter. Our calculations also showed that PFIE isn’t among the 30 most popular stocks among hedge funds (click for Q3 rankings and see the video below for Q2 rankings).

According to most market participants, hedge funds are viewed as slow, outdated investment tools of years past. While there are more than 8000 funds in operation at the moment, Our experts choose to focus on the aristocrats of this club, about 750 funds. Most estimates calculate that this group of people oversee most of the smart money’s total capital, and by following their unrivaled picks, Insider Monkey has revealed a number of investment strategies that have historically defeated the broader indices. Insider Monkey’s flagship short hedge fund strategy beat the S&P 500 short ETFs by around 20 percentage points annually since its inception in May 2014. Our portfolio of short stocks lost 27.8% since February 2017 (through November 21st) even though the market was up more than 39% during the same period. We just shared a list of 7 short targets in our latest quarterly update .

We leave no stone unturned when looking for the next great investment idea. For example Europe is set to become the world’s largest cannabis market, so we check out this European marijuana stock pitch. One of the most bullish analysts in America just put his money where his mouth is. He says, “I’m investing more today than I did back in early 2009.” So we check out his pitch. We read hedge fund investor letters and listen to stock pitches at hedge fund conferences. We also rely on the best performing hedge funds‘ buy/sell signals. We’re going to take a peek at the recent hedge fund action surrounding Profire Energy, Inc. (NASDAQ:PFIE).

How have hedgies been trading Profire Energy, Inc. (NASDAQ:PFIE)?

Heading into the fourth quarter of 2019, a total of 8 of the hedge funds tracked by Insider Monkey were long this stock, a change of -11% from the second quarter of 2019. On the other hand, there were a total of 9 hedge funds with a bullish position in PFIE a year ago. With the smart money’s positions undergoing their usual ebb and flow, there exists a few key hedge fund managers who were upping their holdings considerably (or already accumulated large positions). 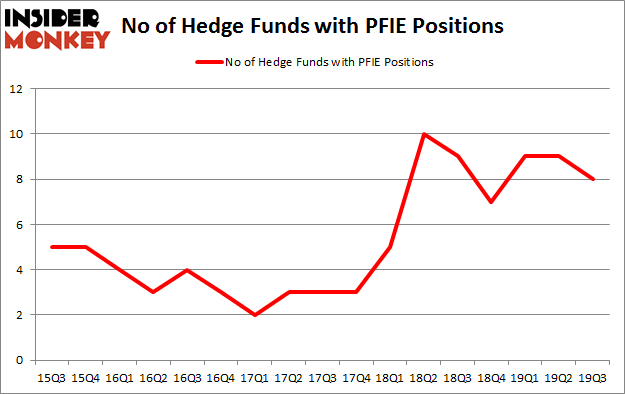 The largest stake in Profire Energy, Inc. (NASDAQ:PFIE) was held by Royce & Associates, which reported holding $3.5 million worth of stock at the end of September. It was followed by Renaissance Technologies with a $2.1 million position. Other investors bullish on the company included Ancora Advisors, Diametric Capital, and Winton Capital Management. In terms of the portfolio weights assigned to each position Diametric Capital allocated the biggest weight to Profire Energy, Inc. (NASDAQ:PFIE), around 0.64% of its 13F portfolio. Ancora Advisors is also relatively very bullish on the stock, setting aside 0.06 percent of its 13F equity portfolio to PFIE.

Because Profire Energy, Inc. (NASDAQ:PFIE) has witnessed bearish sentiment from hedge fund managers, logic holds that there were a few hedge funds who were dropping their full holdings by the end of the third quarter. At the top of the heap, Israel Englander’s Millennium Management sold off the biggest stake of all the hedgies tracked by Insider Monkey, comprising an estimated $0.1 million in stock. Peter Rathjens, Bruce Clarke and John Campbell’s fund, Arrowstreet Capital, also dumped its stock, about $0.1 million worth. These transactions are interesting, as aggregate hedge fund interest dropped by 1 funds by the end of the third quarter.

Let’s now take a look at hedge fund activity in other stocks – not necessarily in the same industry as Profire Energy, Inc. (NASDAQ:PFIE) but similarly valued. We will take a look at Frontier Communications Corporation (NASDAQ:FTR), Trevena Inc (NASDAQ:TRVN), Verastem Inc (NASDAQ:VSTM), and Emclaire Financial Corp (NASDAQ:EMCF). This group of stocks’ market values are similar to PFIE’s market value.

As you can see these stocks had an average of 7 hedge funds with bullish positions and the average amount invested in these stocks was $5 million. That figure was $8 million in PFIE’s case. Frontier Communications Corporation (NASDAQ:FTR) is the most popular stock in this table. On the other hand Emclaire Financial Corp (NASDAQ:EMCF) is the least popular one with only 2 bullish hedge fund positions. Profire Energy, Inc. (NASDAQ:PFIE) is not the most popular stock in this group but hedge fund interest is still above average. This is a slightly positive signal but we’d rather spend our time researching stocks that hedge funds are piling on. Our calculations showed that top 20 most popular stocks among hedge funds returned 37.4% in 2019 through the end of November and outperformed the S&P 500 ETF (SPY) by 9.9 percentage points. Unfortunately PFIE wasn’t nearly as popular as these 20 stocks and hedge funds that were betting on PFIE were disappointed as the stock returned -24.3% during the fourth quarter (through the end of November) and underperformed the market. If you are interested in investing in large cap stocks with huge upside potential, you should check out the top 20 most popular stocks among hedge funds as many of these stocks already outperformed the market so far this year.

Should You Buy Idera Pharmaceuticals Inc (IDRA)?
Monthly Newsletter Strategy
Download a free copy of our newsletter and see the details inside!
Hedge Fund Resource Center
Related News
Profire Energy, Inc. (PFIE): Smart Money Not Seeing Much to be Excited About 10 Countries with the Highest Coffee Consumption in the World 10 Stocks That Went Up During The 2008 Crash 10 Movies About Amnesia on Netflix
Billionaire Hedge Funds