Our extensive research has shown that imitating the smart money can generate significant returns for retail investors, which is why we track nearly 750 active prominent money managers and analyze their quarterly 13F filings. The stocks that are heavily bought by hedge funds historically outperformed the market, though there is no shortage of high profile failures like hedge funds’ 2018 losses in Facebook and Apple. Let’s take a closer look at what the funds we track think about Citizens Financial Group Inc (NYSE:CFG) in this article.

Citizens Financial Group Inc (NYSE:CFG) investors should be aware of a decrease in activity from the world’s largest hedge funds lately. Our calculations also showed that CFG isn’t among the 30 most popular stocks among hedge funds (see the video below). 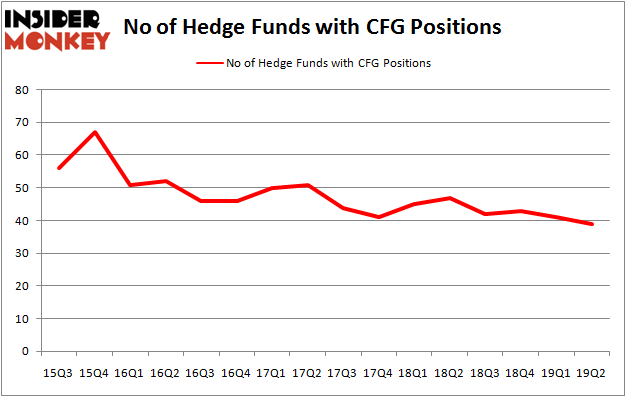 Unlike some fund managers who are betting on Dow reaching 40000 in a year, our long-short investment strategy doesn’t rely on bull markets to deliver double digit returns. We only rely on hedge fund buy/sell signals. We’re going to analyze the latest hedge fund action encompassing Citizens Financial Group Inc (NYSE:CFG).

At the end of the second quarter, a total of 39 of the hedge funds tracked by Insider Monkey were long this stock, a change of -5% from the first quarter of 2019. Below, you can check out the change in hedge fund sentiment towards CFG over the last 16 quarters. So, let’s examine which hedge funds were among the top holders of the stock and which hedge funds were making big moves.

The largest stake in Citizens Financial Group Inc (NYSE:CFG) was held by Citadel Investment Group, which reported holding $190.6 million worth of stock at the end of March. It was followed by Arrowstreet Capital with a $183.9 million position. Other investors bullish on the company included Eminence Capital, D E Shaw, and Two Sigma Advisors.

Judging by the fact that Citizens Financial Group Inc (NYSE:CFG) has experienced declining sentiment from the aggregate hedge fund industry, it’s safe to say that there exists a select few money managers that slashed their entire stakes heading into Q3. At the top of the heap, Andrew Feldstein and Stephen Siderow’s Blue Mountain Capital cut the largest investment of the 750 funds tracked by Insider Monkey, valued at about $6.8 million in stock. David Harding’s fund, Winton Capital Management, also dumped its stock, about $5.7 million worth. These transactions are interesting, as aggregate hedge fund interest fell by 2 funds heading into Q3.