Should You Dump Bank of America Corporation (BAC) Too?

We can judge whether Bank of America Corporation (NYSE:BAC) is a good investment right now by following the lead of some of the best investors in the world and piggybacking their ideas. There’s no better way to get these firms’ immense resources and analytical capabilities working for us than to follow their lead into their best ideas. While not all of these picks will be winners, our research shows that these picks historically outperformed the market when we factor in known risk factors.

Is Bank of America Corporation (NYSE:BAC) a safe investment today? Hedge funds are turning less bullish. The number of long hedge fund bets shrunk by 2 in recent months. Our calculations also showed that BAC ranks 13th among the 30 most popular stocks among hedge funds despite the notable decline in overall hedge fund sentiment.

In the financial world there are a multitude of indicators stock market investors put to use to size up their stock investments. A couple of the most useful indicators are hedge fund and insider trading indicators. We have shown that, historically, those who follow the top picks of the best hedge fund managers can outpace the S&P 500 by a significant margin (see the details here). Unlike some fund managers who are betting on Dow reaching 40000 in a year, our long-short investment strategy outperformed the broader market indices in down markets as well.

Unlike some fund managers who are betting on Dow reaching 40000 in a year, our long-short investment strategy doesn’t rely on bull markets to deliver double digit returns. We only rely on hedge fund buy/sell signals. Let’s take a glance at the fresh hedge fund action encompassing Bank of America Corporation (NYSE:BAC).

What have hedge funds been doing with Bank of America Corporation (NYSE:BAC)? 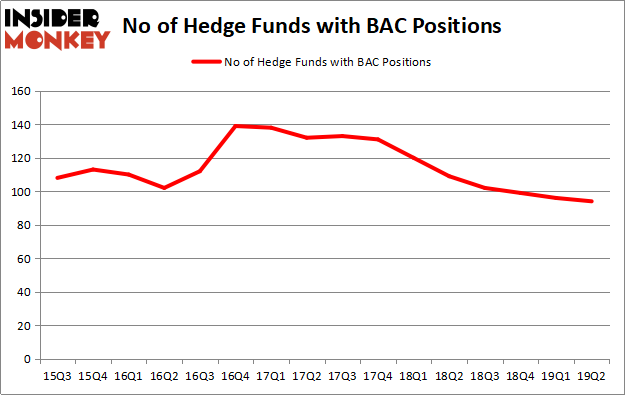 According to publicly available hedge fund and institutional investor holdings data compiled by Insider Monkey, Warren Buffett’s Berkshire Hathaway has the largest position in Bank of America Corporation (NYSE:BAC), worth close to $26.8902 billion, comprising 12.9% of its total 13F portfolio. On Berkshire Hathaway’s heels is Richard S. Pzena of Pzena Investment Management, with a $426.4 million position; the fund has 2.2% of its 13F portfolio invested in the stock. Other peers that are bullish comprise Patrick Degorce’s Theleme Partners, Robert Rodriguez and Steven Romick’s First Pacific Advisors LLC and Anand Desai’s Darsana Capital Partners.

Since Bank of America Corporation (NYSE:BAC) has experienced declining sentiment from the aggregate hedge fund industry, it’s safe to say that there lies a certain “tier” of hedge funds that decided to sell off their entire stakes in the second quarter. Intriguingly, Alex Snow’s Lansdowne Partners dropped the largest stake of the 750 funds watched by Insider Monkey, totaling about $267.9 million in call options, and Julian Robertson’s Tiger Management was right behind this move, as the fund dropped about $88.3 million worth. These transactions are interesting, as aggregate hedge fund interest dropped by 2 funds in the second quarter.

As you can see these stocks had an average of 72 hedge funds with bullish positions and the average amount invested in these stocks was $5226 million. That figure was $31517 million in BAC’s case. The Walt Disney Company (NYSE:DIS) is the most popular stock in this table. On the other hand Royal Dutch Shell plc (NYSE:RDS) is the least popular one with only 34 bullish hedge fund positions. Bank of America Corporation (NYSE:BAC) is not the most popular stock in this group but hedge fund interest is still above average. This is a slightly positive signal but we’d rather spend our time researching stocks that hedge funds are piling on. Our calculations showed that top 20 most popular stocks among hedge funds returned 24.4% in 2019 through September 30th and outperformed the S&P 500 ETF (SPY) by 4 percentage points. Unfortunately BAC wasn’t nearly as successful as these 20 stocks and hedge funds that were betting on BAC were slightly disappointed as the stock returned 1.2% during the third quarter and underperformed the market by a small margin. If you are interested in investing in large cap stocks with huge upside potential, you should check out the top 20 most popular stocks among hedge funds as many of these stocks already outperformed the market so far this year.