The latest 13F reporting period has come and gone, and Insider Monkey is again at the forefront when it comes to making use of this gold mine of data. We have processed the filings of the more than 700 world-class investment firms that we track and now have access to the collective wisdom contained in these filings, which are based on their September 30 holdings, data that is available nowhere else. Should you consider Royal Caribbean Cruises Ltd. (NYSE:RCL) for your portfolio? We’ll look to this invaluable collective wisdom for the answer.

Royal Caribbean Cruises Ltd. (NYSE:RCL) was in 45 hedge funds’ portfolios at the end of the third quarter of 2019. RCL investors should pay attention to a decrease in support from the world’s most elite money managers lately. There were 46 hedge funds in our database with RCL holdings at the end of the previous quarter. Our calculations also showed that RCL isn’t among the 30 most popular stocks among hedge funds.

According to most market participants, hedge funds are seen as slow, old financial vehicles of years past. While there are over 8000 funds with their doors open today, Our researchers hone in on the moguls of this group, about 750 funds. These hedge fund managers handle the majority of all hedge funds’ total capital, and by following their highest performing stock picks, Insider Monkey has revealed numerous investment strategies that have historically outpaced the S&P 500 index. Insider Monkey’s flagship short hedge fund strategy beat the S&P 500 short ETFs by around 20 percentage points per annum since its inception in May 2014. Our portfolio of short stocks lost 27.8% since February 2017 (through November 21st) even though the market was up more than 39% during the same period. We just shared a list of 7 short targets in our latest quarterly update .

Unlike the largest US hedge funds that are convinced Dow will soar past 40,000 or the world’s most bearish hedge fund that’s more convinced than ever that a crash is coming, our long-short investment strategy doesn’t rely on bull or bear markets to deliver double digit returns. We only rely on the best performing hedge funds‘ buy/sell signals. Let’s take a look at the recent hedge fund action encompassing Royal Caribbean Cruises Ltd. (NYSE:RCL). 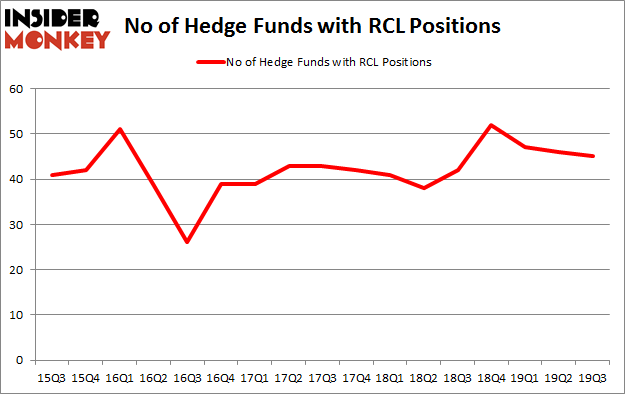 According to Insider Monkey’s hedge fund database, David E. Shaw’s D E Shaw has the number one position in Royal Caribbean Cruises Ltd. (NYSE:RCL), worth close to $340.9 million, comprising 0.4% of its total 13F portfolio. On D E Shaw’s heels is Ricky Sandler of Eminence Capital, with a $202.2 million position; 2.4% of its 13F portfolio is allocated to the company. Some other hedge funds and institutional investors with similar optimism comprise Peter Rathjens, Bruce Clarke and John Campbell’s Arrowstreet Capital, Andrew Immerman and Jeremy Schiffman’s Palestra Capital Management and Renaissance Technologies. In terms of the portfolio weights assigned to each position Anchor Bolt Capital allocated the biggest weight to Royal Caribbean Cruises Ltd. (NYSE:RCL), around 5.14% of its portfolio. Palestra Capital Management is also relatively very bullish on the stock, dishing out 4.58 percent of its 13F equity portfolio to RCL.

Because Royal Caribbean Cruises Ltd. (NYSE:RCL) has witnessed falling interest from hedge fund managers, it’s safe to say that there were a few hedgies that elected to cut their positions entirely last quarter. Intriguingly, Jacob Doft’s Highline Capital Management dropped the biggest stake of all the hedgies monitored by Insider Monkey, comprising an estimated $67.5 million in stock. Principal Global Investors’s fund, Columbus Circle Investors, also sold off its stock, about $25.5 million worth. These transactions are intriguing to say the least, as total hedge fund interest dropped by 1 funds last quarter.

As you can see these stocks had an average of 38 hedge funds with bullish positions and the average amount invested in these stocks was $1819 million. That figure was $1673 million in RCL’s case. Synchrony Financial (NYSE:SYF) is the most popular stock in this table. On the other hand Veeva Systems Inc (NYSE:VEEV) is the least popular one with only 33 bullish hedge fund positions. Compared to these stocks Royal Caribbean Cruises Ltd. (NYSE:RCL) is more popular among hedge funds. Our calculations showed that top 20 most popular stocks among hedge funds returned 34.7% in 2019 through November 22nd and outperformed the S&P 500 ETF (SPY) by 8.5 percentage points. Hedge funds were also right about betting on RCL as the stock returned 10% during Q4 (through 11/22) and outperformed the market by an even larger margin. Hedge funds were clearly right about piling into this stock relative to other stocks with similar market capitalizations.