There are several ways to beat the market, and investing in small cap stocks has historically been one of them. We like to improve the odds of beating the market further by examining what famous hedge fund operators such as Carl Icahn and George Soros think. Those hedge fund operators make billions of dollars each year by hiring the best and the brightest to do research on stocks, including small cap stocks that big brokerage houses simply don’t cover. Because of Carl Icahn and other elite funds’ exemplary historical records, we pay attention to their small cap picks. In this article, we use hedge fund filing data to analyze Quest Diagnostics Incorporated (NYSE:DGX).

Quest Diagnostics Incorporated (NYSE:DGX) was in 38 hedge funds’ portfolios at the end of September. DGX has seen an increase in support from the world’s most elite money managers recently. There were 29 hedge funds in our database with DGX holdings at the end of the previous quarter. Our calculations also showed that DGX isn’t among the 30 most popular stocks among hedge funds.

In today’s marketplace there are tons of formulas shareholders have at their disposal to size up stocks. Two of the less known formulas are hedge fund and insider trading indicators. Our experts have shown that, historically, those who follow the top picks of the top hedge fund managers can trounce the market by a superb amount (see the details here). 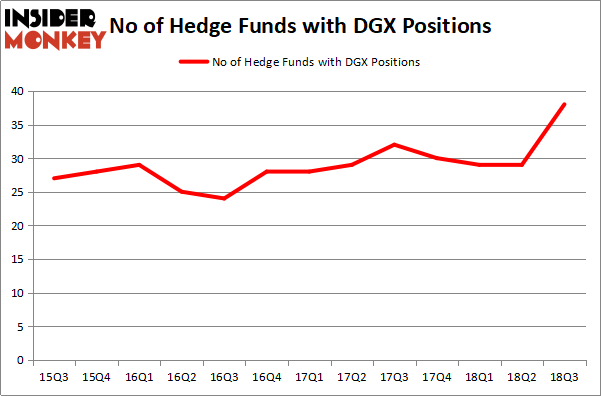 When looking at the institutional investors followed by Insider Monkey, Marshall Wace LLP, managed by Paul Marshall and Ian Wace, holds the biggest position in Quest Diagnostics Incorporated (NYSE:DGX). Marshall Wace LLP has a $164.6 million position in the stock, comprising 1.4% of its 13F portfolio. On Marshall Wace LLP’s heels is Healthcor Management LP, led by Arthur B Cohen and Joseph Healey, holding a $79.4 million position; the fund has 2.6% of its 13F portfolio invested in the stock. Some other peers that hold long positions include John Overdeck and David Siegel’s Two Sigma Advisors, Ken Griffin’s Citadel Investment Group and Bernard Horn’s Polaris Capital Management.

As aggregate interest increased, some big names have been driving this bullishness. Polar Capital, managed by Brian Ashford-Russell and Tim Woolley, initiated the largest position in Quest Diagnostics Incorporated (NYSE:DGX). Polar Capital had $16.1 million invested in the company at the end of the quarter. Matthew Tewksbury’s Stevens Capital Management also made a $9.5 million investment in the stock during the quarter. The other funds with brand new DGX positions are Peter Rathjens, Bruce Clarke and John Campbell’s Arrowstreet Capital, Vishal Saluja and Pham Quang’s Endurant Capital Management, and Alec Litowitz and Ross Laser’s Magnetar Capital.

As you can see these stocks had an average of 33 hedge funds with bullish positions and the average amount invested in these stocks was $1.73 billion. That figure was $649 million in DGX’s case. Incyte Corporation (NASDAQ:INCY) is the most popular stock in this table. On the other hand Entergy Corporation (NYSE:ETR) is the least popular one with only 27 bullish hedge fund positions. Compared to these stocks Quest Diagnostics Incorporated (NYSE:DGX) is more popular among hedge funds. Considering that hedge funds are fond of this stock in relation to its market cap peers, it may be a good idea to analyze it in detail and potentially include it in your portfolio.