Once upon a time in a regulatory environment far, far away, there was a cholesterol-fighting drug named Lipitor from Pfizer Inc. (NYSE:PFE). While analysts had a hunch the statin would be a pretty successful product, I’ll bet no one envisioned it raking in more than $131 billion in global sales in its lifetime and becoming the world’s most successful drug. Ever.

Today, generic competition has severely damaged Lipitor’s dominance. The drug is on pace for sales of only $2 billion in 2013 — a far cry from the $13.7 billion it once captured annually. Treating high levels of cholesterol, specifically LDL cholesterol, is more competitive than ever before, but the market always has room for successful therapies. Can a new class of drugs being developed become the next big breakthrough in the cholesterol market?

A neck-and-neck race
Several companies are sprinting to develop new LDL cholesterol-lowering drugs that inhibit the PCSK9 protein, which is active in cholesterol synthesis, and allow for more cholesterol to be removed through the liver. Regeneron Pharmaceuticals Inc (NASDAQ:REGN) and Amgen, Inc. (NASDAQ:AMGN) wield competing phase 3 candidates that figure to be the first drugs in the new class to make it to market (pending trial outcomes, of course). The gene for the protein was only discovered in 2003, and a possible genetic link between the protein and LDL cholesterol was only established in 2006. So I think we can say that the industry has responded extremely quickly to the class’ potential, which could translate into billions of dollars in annual sales.

In collaboration with Sanofi SA (ADR) (NYSE:SNY), Regeneron Pharmaceuticals Inc (NASDAQ:REGN) is developing alirocumab, or REGN727, a fully human antibody. The biologic smoked a 12-week phase 2 trial, lowering LDL cholesterol levels from baseline readings by 28.9% to 67.9% over the dosing range, compared to just 10.7% for placebo. No serious adverse events were reported for patients taking the investigational drug.

Amgen, Inc. (NASDAQ:AMGN) is developing AMG 145, which is also going through a host of trials. A recent phase 2 trial evaluating the drug in combination with the statin Zetia (ezetimibe) showed off its potential. AMG 145 decreased LDL cholesterol levels by 51% on its own and by 63% in combination with ezetimibe, compared to just 15% with ezetimibe alone. Regeneron Pharmaceuticals Inc (NASDAQ:REGN) could use its new drug to further bolster its pipeline, while Amgen needs a few big pipeline wins to make up for patent expirations occurring by the end of the decade. 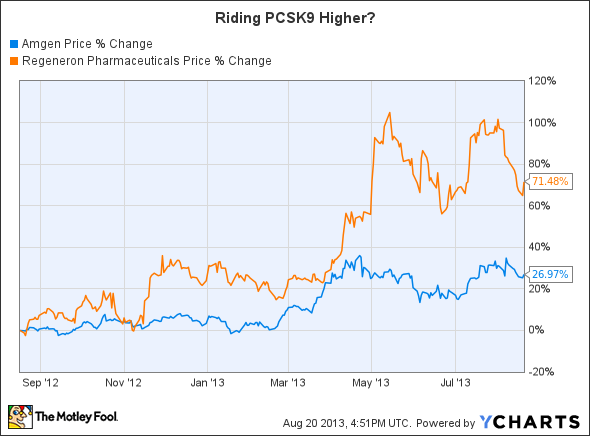 Both REGN727 and AMG 145 are being evaluated in trials with dosing ranging from one to two injections per month in patients who did not respond to statins such as Lipitor. Given the incredibly competitive timelines of the trials, it is possible everything — approval, market launch, marketing — could come down to convenience for patients. Then again, it is also possible for both drugs to leave late-stage trials neck-and-neck, which would turn up the heat on the competition.

Too crowded for megablockbusters?
There may be billions of dollars at stake in the LDL cholesterol-lowering market, but there is also a healthy field of competition. Aside from Regeneron Pharmaceuticals Inc (NASDAQ:REGN) and Amgen, Inc. (NASDAQ:AMGN), PCSK9 inhibitors are also being developed by Pfizer Inc. (NYSE:PFE), Novartis AG (ADR) (NYSE:NVS), Bristol Myers Squibb Co. (NYSE:BMY), and Alnylam Pharmaceuticals, Inc. (NASDAQ:ALNY). In an attempt to relive its Lipitor glory days, Pfizer is evaluating RN316, another promising biologic, in a phase 2 trial. That puts it years away from the two drugs discussed above, but it could be an important product for the company nonetheless.