Shares of Perrigo Company (NYSE:PRGO), one of the world’s largest health care suppliers, slid with the broader market on Aug. 15 after the company reported fourth-quarter earnings that topped analyst estimates but missed revenue forecasts. Over the past month, Perrigo Company (NYSE:PRGO) has drawn a lot of criticism for its $8.6 billion takeover of Irish pharmaceutical Elan Corporation, plc (ADR) (NYSE:ELN), which reduced its corporate tax rate by moving its headquarters from Michigan to Ireland. I discussed the controversial Elan acquisition at length in a previous article, so in this article, I’d like to focus more on Perrigo’s fundamentals.

Mixed fourth-quarter and full-year earnings
For its fourth quarter, Perrigo Company (NYSE:PRGO) earned $1.57 per share, a 22.7% increase over the prior year quarter that beat the consensus estimate by a penny. Revenue rose 16.3% to $967.2 million, but fell short of the $999 million that analysts had expected. The company’s full year results were similar — earnings of $5.61 per share, which topped estimates by a penny, and revenue of $3.5 billion, which missed the consensus estimate of $3.6 billion. Full-year earnings and revenue rose 12.4% and 12%, respectively.

Much of Perrigo’s top line growth during the quarter was attributed to its recent acquisitions of four companies — Sergeant’s Pet Care Products, pet care products maker Velcera, prescription drug maker Rosemont Pharmaceuticals and eye-care company Fera Pharmaceuticals — which generated a combined $83 million in sales during the quarter. New products contributed to $30 million in new sales, and Perrigo’s base business grew by $21 million.

Growth in consumer health care
Perrigo Company (NYSE:PRGO)’s consumer health care unit is its largest business segment, accounting for 58% of the company’s top line with $563 million in sales. Revenue at the segment — which covers a range of over-the-counter and generic medications, dietary products, and feminine hygiene products — rose 16% from the prior-year quarter. The inclusion of Sergeant’s Pet Care Products and Velcera aided this segment’s growth.

Perrigo reported the strongest growth in the cough and cold unit and its smoking cessation unit, which produces nicotine gum and lozenges. Perrigo competes against Johnson & Johnson (NYSE:JNJ) and GlaxoSmithKline plc (ADR) (NYSE:GSK) in both categories. Johnson & Johnson owns Nicorette, the most well-known smoking cessation product on the market. Johnson & Johnson (NYSE:JNJ) markets the product in international markets, focusing extensively on emerging markets like India, which have a high percentage of smokers. GlaxoSmithKline plc (ADR) (NYSE:GSK) holds the license to Nicorette within the United States, which complements its own Commit nicotine lozenges.

J&J and Glaxo both have extensive OTC portfolios. Johnson & Johnson (NYSE:JNJ) produces Tylenol, while GlaxoSmithKline plc (ADR) (NYSE:GSK) manufactures Panadol — two of the most popular OTC cold and pain medications in the world. Perrigo, on the other hand, has built its business on selling generic store-brand versions of popular treatments from Johnson & Johnson (NYSE:JNJ), Glaxo, and other pharmaceutical companies at lower prices. Perrigo Company (NYSE:PRGO)’s OTC sales were also boosted by J&J’s ongoing manufacturing problems at McNeil, its OTC unit that was hit by a wave of recalls in 2010. 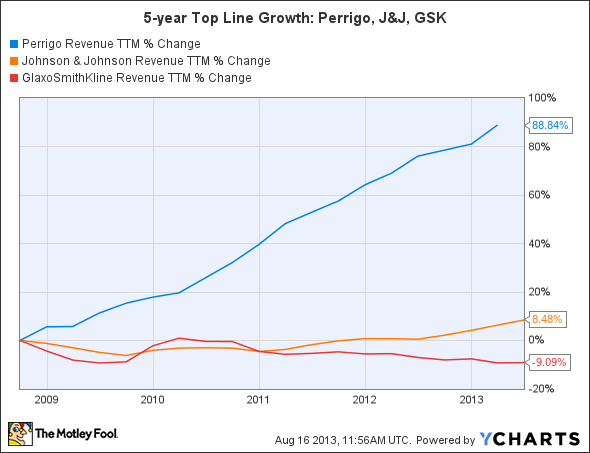 Growth in generics
Perrigo’s second largest business segment is its Rx Pharmaceuticals segment, which accounts for 20% of its total revenue. Sales at this segment rose 24% year-on-year to $195 million, aided by the aforementioned acquisitions of Rosemont and Fera, which contributed $16 million to its top line. Perrigo Company (NYSE:PRGO) is the largest maker of generic drugs for the major retail chains in the United States, including Wal-Mart and Walgreen.