Out of thousands of stocks that are currently traded on the market, it is difficult to identify those that will really generate strong returns. Hedge funds and institutional investors spend millions of dollars on analysts with MBAs and PhDs, who are industry experts and well connected to other industry and media insiders on top of that. Individual investors can piggyback the hedge funds employing these talents and can benefit from their vast resources and knowledge in that way. We analyze quarterly 13F filings of nearly 750 hedge funds and, by looking at the smart money sentiment that surrounds a stock, we can determine whether it has the potential to beat the market over the long-term. Therefore, let’s take a closer look at what smart money thinks about Okta, Inc. (NASDAQ:OKTA) and compare its performance to hedge funds’ consensus picks in 2019.

We leave no stone unturned when looking for the next great investment idea. For example Discover is offering this insane cashback card, so we look into shorting the stock. One of the most bullish analysts in America just put his money where his mouth is. He says, “I’m investing more today than I did back in early 2009.” So we check out his pitch. We read hedge fund investor letters and listen to stock pitches at hedge fund conferences. We even check out this option genius’ weekly trade ideas. This December, we recommended Adams Energy as a one-way bet based on an under-the-radar fund manager’s investor letter and the stock already gained 20 percent. Now let’s review the key hedge fund action encompassing Okta, Inc. (NASDAQ:OKTA).

Heading into the fourth quarter of 2019, a total of 49 of the hedge funds tracked by Insider Monkey held long positions in this stock, a change of 26% from one quarter earlier. The graph below displays the number of hedge funds with bullish position in OKTA over the last 17 quarters. So, let’s check out which hedge funds were among the top holders of the stock and which hedge funds were making big moves. 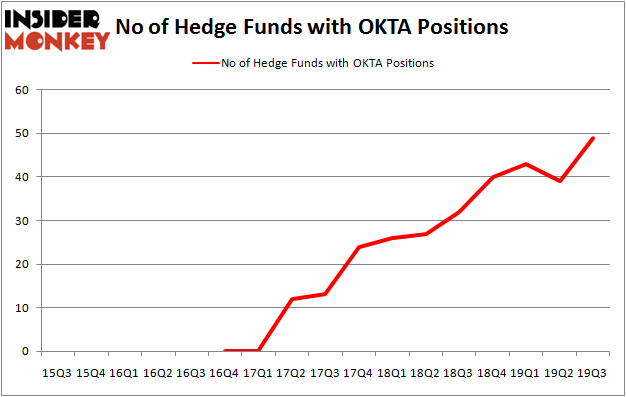 With a general bullishness amongst the heavyweights, key money managers were breaking ground themselves. Holocene Advisors, managed by Brandon Haley, initiated the biggest position in Okta, Inc. (NASDAQ:OKTA). Holocene Advisors had $55.8 million invested in the company at the end of the quarter. Amish Mehta’s SQN Investors also initiated a $33 million position during the quarter. The following funds were also among the new OKTA investors: Stanley Druckenmiller’s Duquesne Capital, Benjamin A. Smith’s Laurion Capital Management, and Matthew Hulsizer’s PEAK6 Capital Management.

Let’s now review hedge fund activity in other stocks – not necessarily in the same industry as Okta, Inc. (NASDAQ:OKTA) but similarly valued. We will take a look at Godaddy Inc (NYSE:GDDY), iQIYI, Inc. (NASDAQ:IQ), Wheaton Precious Metals Corp. (NYSE:WPM), and Teledyne Technologies Incorporated (NYSE:TDY). All of these stocks’ market caps are closest to OKTA’s market cap.

As you can see these stocks had an average of 31.5 hedge funds with bullish positions and the average amount invested in these stocks was $1131 million. That figure was $1121 million in OKTA’s case. Godaddy Inc (NYSE:GDDY) is the most popular stock in this table. On the other hand iQIYI, Inc. (NASDAQ:IQ) is the least popular one with only 22 bullish hedge fund positions. Compared to these stocks Okta, Inc. (NASDAQ:OKTA) is more popular among hedge funds. Our calculations showed that top 20 most popular stocks among hedge funds returned 41.1% in 2019 through December 23rd and outperformed the S&P 500 ETF (SPY) by 10.1 percentage points. Hedge funds were also right about betting on OKTA as the stock returned 85.1% so far in 2019 (through 12/23) and outperformed the market by an even larger margin. Hedge funds were clearly right about piling into this stock relative to other stocks with similar market capitalizations.