Insider Monkey has processed numerous 13F filings of hedge funds and successful value investors to create an extensive database of hedge fund holdings. The 13F filings show the hedge funds’ and successful investors’ positions as of the end of the second quarter. You can find write-ups about an individual hedge fund’s trades on numerous financial news websites. However, in this article we will take a look at their collective moves and analyze what the smart money thinks of New Frontier Corporation (NYSE:NFC) based on that data.

Is New Frontier Corporation (NYSE:NFC) an outstanding investment now? Prominent investors are reducing their bets on the stock. The number of bullish hedge fund bets shrunk by 1 lately. Our calculations also showed that NFC isn’t among the 30 most popular stocks among hedge funds (see the video below).

According to most market participants, hedge funds are viewed as underperforming, old investment vehicles of the past. While there are greater than 8000 funds trading at the moment, We choose to focus on the top tier of this group, around 750 funds. These money managers shepherd the lion’s share of all hedge funds’ total asset base, and by keeping an eye on their unrivaled equity investments, Insider Monkey has unsheathed a few investment strategies that have historically surpassed the market. Insider Monkey’s flagship hedge fund strategy outpaced the S&P 500 index by around 5 percentage points a year since its inception in May 2014. We were able to generate large returns even by identifying short candidates. Our portfolio of short stocks lost 25.7% since February 2017 (through September 30th) even though the market was up more than 33% during the same period. We just shared a list of 10 short targets in our latest quarterly update .

Unlike other investors who track every movement of the 25 largest hedge funds, our long-short investment strategy relies on hedge fund buy/sell signals given by the 100 best performing hedge funds. We’re going to go over the recent hedge fund action encompassing New Frontier Corporation (NYSE:NFC). 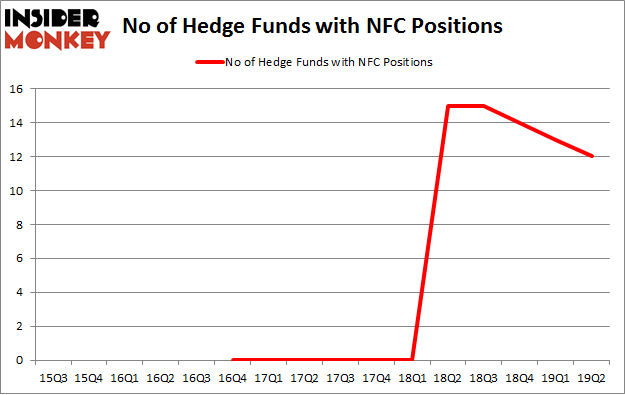 Of the funds tracked by Insider Monkey, Fir Tree, managed by Jeffrey Tannenbaum, holds the number one position in New Frontier Corporation (NYSE:NFC). Fir Tree has a $10 million position in the stock, comprising 1% of its 13F portfolio. On Fir Tree’s heels is David Costen Haley of HBK Investments, with a $7.6 million position; the fund has 0.1% of its 13F portfolio invested in the stock. Remaining hedge funds and institutional investors that hold long positions consist of Anand Parekh’s Alyeska Investment Group, Paul Glazer’s Glazer Capital and Louis Bacon’s Moore Global Investments.

Due to the fact that New Frontier Corporation (NYSE:NFC) has experienced falling interest from the aggregate hedge fund industry, logic holds that there was a specific group of funds who sold off their positions entirely heading into Q3. It’s worth mentioning that Glenn Russell Dubin’s Highbridge Capital Management dumped the largest stake of the “upper crust” of funds tracked by Insider Monkey, comprising an estimated $5 million in stock. John Thiessen’s fund, Vertex One Asset Management, also cut its stock, about $1.5 million worth. These transactions are important to note, as aggregate hedge fund interest dropped by 1 funds heading into Q3.

As you can see these stocks had an average of 10.75 hedge funds with bullish positions and the average amount invested in these stocks was $60 million. That figure was $56 million in NFC’s case. Shoe Carnival, Inc. (NASDAQ:SCVL) is the most popular stock in this table. On the other hand Dynex Capital Inc (NYSE:DX) is the least popular one with only 6 bullish hedge fund positions. New Frontier Corporation (NYSE:NFC) is not the most popular stock in this group but hedge fund interest is still above average. This is a slightly positive signal but we’d rather spend our time researching stocks that hedge funds are piling on. Our calculations showed that top 20 most popular stocks among hedge funds returned 24.4% in 2019 through September 30th and outperformed the S&P 500 ETF (SPY) by 4 percentage points. Unfortunately NFC wasn’t nearly as popular as these 20 stocks and hedge funds that were betting on NFC were disappointed as the stock returned 1.1% during the third quarter and underperformed the market. If you are interested in investing in large cap stocks with huge upside potential, you should check out the top 20 most popular stocks among hedge funds as many of these stocks already outperformed the market so far this year.