The latest 13F reporting period has come and gone, and Insider Monkey is again at the forefront when it comes to making use of this gold mine of data. We have processed the filings of the more than 700 world-class investment firms that we track and now have access to the collective wisdom contained in these filings, which are based on their December 31 holdings, data that is available nowhere else. Should you consider New Frontier Corp (NYSE:NFC) for your portfolio? We’ll look to this invaluable collective wisdom for the answer.

Is New Frontier Corp (NYSE:NFC) the right investment to pursue these days? The smart money is selling. The number of long hedge fund bets decreased by 1 lately. Our calculations also showed that NFC isn’t among the 30 most popular stocks among hedge funds. NFC was in 14 hedge funds’ portfolios at the end of December. There were 15 hedge funds in our database with NFC holdings at the end of the previous quarter.

What does the smart money think about New Frontier Corp (NYSE:NFC)?

At the end of the fourth quarter, a total of 14 of the hedge funds tracked by Insider Monkey were bullish on this stock, a change of -7% from the previous quarter. Below, you can check out the change in hedge fund sentiment towards NFC over the last 14 quarters. With hedge funds’ sentiment swirling, there exists an “upper tier” of noteworthy hedge fund managers who were increasing their holdings significantly (or already accumulated large positions). 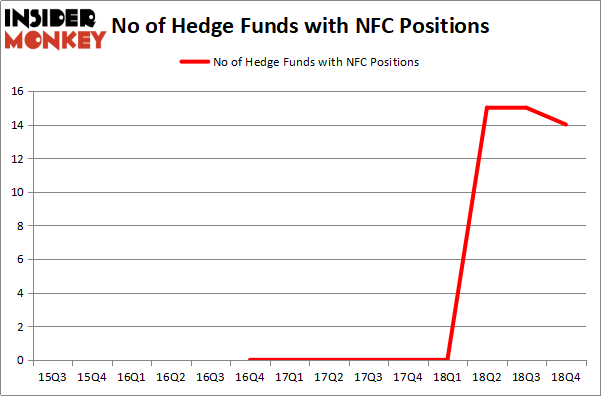 Since New Frontier Corp (NYSE:NFC) has faced bearish sentiment from the smart money, it’s easy to see that there was a specific group of hedge funds that slashed their positions entirely last quarter. At the top of the heap, Anand Parekh’s Alyeska Investment Group said goodbye to the biggest stake of the 700 funds followed by Insider Monkey, totaling about $6.1 million in stock. Andrew Weiss’s fund, Weiss Asset Management, also dropped its stock, about $1.7 million worth. These transactions are important to note, as total hedge fund interest was cut by 1 funds last quarter.