Legendary investors such as Jeffrey Talpins and Seth Klarman earn enormous amounts of money for themselves and their investors by doing in-depth research on small-cap stocks that big brokerage houses don’t publish. Small cap stocks -especially when they are screened well- can generate substantial outperformance versus a boring index fund. That’s why we analyze the activity of those elite funds in these small-cap stocks. In the following paragraphs, we analyze Magenta Therapeutics, Inc. (NASDAQ:MGTA) from the perspective of those elite funds.

Magenta Therapeutics, Inc. (NASDAQ:MGTA) shares haven’t seen a lot of action during the second quarter. Overall, hedge fund sentiment was unchanged. The stock was in 8 hedge funds’ portfolios at the end of June. The level and the change in hedge fund popularity aren’t the only variables you need to analyze to decipher hedge funds’ perspectives. A stock may witness a boost in popularity but it may still be less popular than similarly priced stocks. That’s why at the end of this article we will examine companies such as Casa Systems, Inc. (NASDAQ:CASA), National CineMedia, Inc. (NASDAQ:NCMI), and Gamco Investors Inc. (NYSE:GBL) to gather more data points. Our calculations also showed that MGTA isn’t among the 30 most popular stocks among hedge funds (see the video below).

At the end of the second quarter, a total of 8 of the hedge funds tracked by Insider Monkey were long this stock, a change of 0% from the first quarter of 2019. On the other hand, there were a total of 14 hedge funds with a bullish position in MGTA a year ago. With hedge funds’ sentiment swirling, there exists a few key hedge fund managers who were increasing their holdings meaningfully (or already accumulated large positions). 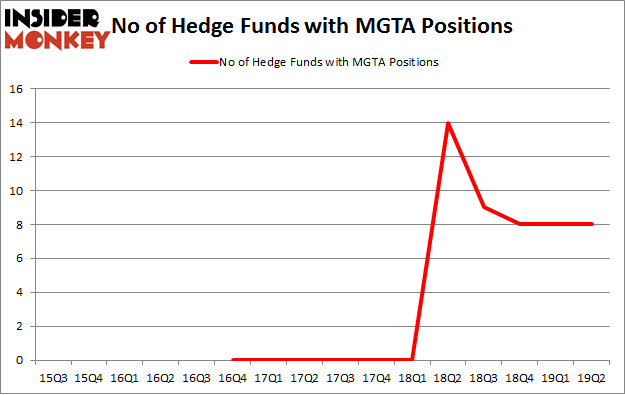 Among these funds, Casdin Capital held the most valuable stake in Magenta Therapeutics, Inc. (NASDAQ:MGTA), which was worth $44.3 million at the end of the second quarter. On the second spot was Opaleye Management which amassed $7.9 million worth of shares. Moreover, Alkeon Capital Management, Harvard Management Co, and Citadel Investment Group were also bullish on Magenta Therapeutics, Inc. (NASDAQ:MGTA), allocating a large percentage of their portfolios to this stock.

We view hedge fund activity in the stock unfavorable, but in this case there was only a single hedge fund selling its entire position: EcoR1 Capital. One hedge fund selling its entire position doesn’t always imply a bearish intent. Theoretically a hedge fund may decide to sell a promising position in order to invest the proceeds in a more promising idea. However, we don’t think this is the case in this case because only one of the 800+ hedge funds tracked by Insider Monkey identified as a viable investment and initiated a position in the stock (that fund was Alkeon Capital Management).

As you can see these stocks had an average of 11.5 hedge funds with bullish positions and the average amount invested in these stocks was $29 million. That figure was $72 million in MGTA’s case. National CineMedia, Inc. (NASDAQ:NCMI) is the most popular stock in this table. On the other hand FRP Holdings Inc (NASDAQ:FRPH) is the least popular one with only 7 bullish hedge fund positions. Magenta Therapeutics, Inc. (NASDAQ:MGTA) is not the least popular stock in this group but hedge fund interest is still below average. This is a slightly negative signal and we’d rather spend our time researching stocks that hedge funds are piling on. Our calculations showed that top 20 most popular stocks among hedge funds returned 24.4% in 2019 through September 30th and outperformed the S&P 500 ETF (SPY) by 4 percentage points. Unfortunately MGTA wasn’t nearly as popular as these 20 stocks (hedge fund sentiment was quite bearish); MGTA investors were disappointed as the stock returned -30.4% during the third quarter and underperformed the market. If you are interested in investing in large cap stocks with huge upside potential, you should check out the top 20 most popular stocks among hedge funds as many of these stocks already outperformed the market so far in 2019.

This Hedge Fund Can Still Deliver Double Digit Returns: Here Are Its Top Picks...
Monthly Newsletter Strategy
Download a free copy of our newsletter and see the details inside!
Hedge Fund Resource Center
Related News
11 Largest Auto Insurance Companies In The US In 2019 10 Poorest Cities in America in 2019 8 Lowest Tar and Nicotine Cigarette Brands in 2019
Billionaire Hedge Funds