We are still in an overall bull market and many stocks that smart money investors were piling into surged in 2019. Among them, Facebook and Microsoft ranked among the top 3 picks and these stocks gained 57% each. Hedge funds’ top 3 stock picks returned 45.7% last year and beat the S&P 500 ETFs by more than 14 percentage points. Investing in index funds guarantees you average returns, not superior returns. We are looking to generate superior returns for our readers. That’s why we believe it isn’t a waste of time to check out hedge fund sentiment before you invest in a stock like Lumentum Holdings Inc (NASDAQ:LITE).

Lumentum Holdings Inc (NASDAQ:LITE) investors should pay attention to a decrease in support from the world’s most elite money managers in recent months. LITE was in 29 hedge funds’ portfolios at the end of September. There were 30 hedge funds in our database with LITE holdings at the end of the previous quarter. Our calculations also showed that LITE isn’t among the 30 most popular stocks among hedge funds (click for Q3 rankings and see the video at the end of this article for Q2 rankings).

In the 21st century investor’s toolkit there are numerous tools shareholders use to evaluate publicly traded companies. A couple of the most under-the-radar tools are hedge fund and insider trading indicators. We have shown that, historically, those who follow the best picks of the best fund managers can trounce their index-focused peers by a healthy amount (see the details here).

We leave no stone unturned when looking for the next great investment idea. For example Europe is set to become the world’s largest cannabis market, so we check out this European marijuana stock pitch. We read hedge fund investor letters and listen to stock pitches at hedge fund conferences. This December, we recommended Adams Energy as a one-way bet based on an under-the-radar fund manager’s investor letter and the stock is still extremely cheap despite already gaining 20 percent. Now let’s take a peek at the fresh hedge fund action regarding Lumentum Holdings Inc (NASDAQ:LITE).

How have hedgies been trading Lumentum Holdings Inc (NASDAQ:LITE)? 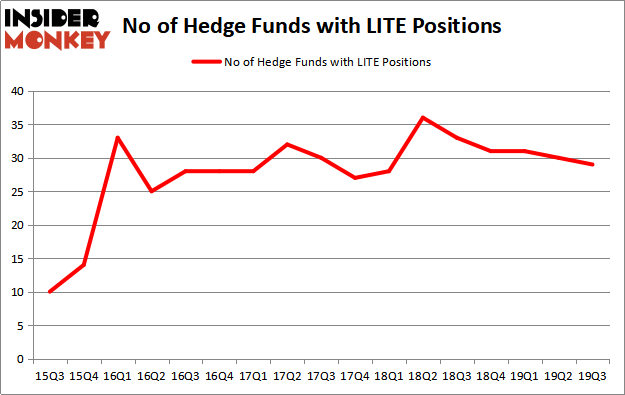 More specifically, Point72 Asset Management was the largest shareholder of Lumentum Holdings Inc (NASDAQ:LITE), with a stake worth $48.7 million reported as of the end of September. Trailing Point72 Asset Management was Citadel Investment Group, which amassed a stake valued at $44 million. Cavalry Asset Management, Fisher Asset Management, and Carlson Capital were also very fond of the stock, becoming one of the largest hedge fund holders of the company. In terms of the portfolio weights assigned to each position Bronson Point Partners allocated the biggest weight to Lumentum Holdings Inc (NASDAQ:LITE), around 6.39% of its 13F portfolio. Cavalry Asset Management is also relatively very bullish on the stock, setting aside 6.33 percent of its 13F equity portfolio to LITE.

Since Lumentum Holdings Inc (NASDAQ:LITE) has faced a decline in interest from the aggregate hedge fund industry, it’s easy to see that there were a few hedgies who sold off their full holdings in the third quarter. Intriguingly, Anand Parekh’s Alyeska Investment Group dumped the biggest position of the 750 funds followed by Insider Monkey, valued at an estimated $30.5 million in stock. Lee Ainslie’s fund, Maverick Capital, also cut its stock, about $15 million worth. These transactions are interesting, as aggregate hedge fund interest fell by 1 funds in the third quarter.

As you can see these stocks had an average of 21 hedge funds with bullish positions and the average amount invested in these stocks was $348 million. That figure was $219 million in LITE’s case. frontdoor, inc. (NASDAQ:FTDR) is the most popular stock in this table. On the other hand Compania Cervecerias Unidas S.A. (NYSE:CCU) is the least popular one with only 9 bullish hedge fund positions. Lumentum Holdings Inc (NASDAQ:LITE) is not the most popular stock in this group but hedge fund interest is still above average. Our calculations showed that top 20 most popular stocks among hedge funds returned 41.3% in 2019 and outperformed the S&P 500 ETF (SPY) by 10.1 percentage points. Hedge funds were also right about betting on LITE as the stock returned 88.8% in 2019 and outperformed the market. Hedge funds were rewarded for their relative bullishness.