In a recent interview with CNBC, Mario Gabelli, a successful investment manager, has talked about two stocks that would double in the near future. One was Gencorp, with its huge hidden real estate value. The other was Legg Mason, Inc. (NYSE:LM), a global asset management company. In this article, I’ll dig deeper into Legg Mason to determine whether or not we should follow Mario Gabelli into this company.

Legg Mason is considered one of the most diversified asset management firms in the world, with around $654 billion in assets under management (AUM) as of December 2012. The two biggest revenue contributors were Fixed Income (41%) and Equity (41%). The majority of assets was invested in fixed income, accounting for 57% of the total AUM, while Equity and Liquidity represented 22% and 21% of the total AUM, respectively. As the majority of the AUM, 72% of the total AUM, was from institutions, the AUM was considered quite sticky. However, Legg Mason has been facing challenges for several years as investors have been pulling money from its funds. The AUM has decreased from $1 trillion in the beginning of 2008 to $654 billion. In the third quarter of fiscal year 2013, the net outflow was around $7.5 billion.

In order to evaluate an asset managers’ capabilities, we should look at their performances in a 5-10 year period to see whether or not their results beat the benchmark. In a 10-year period, Legg Mason has had significantly high percentages of its strategy AUM beating the benchmark. 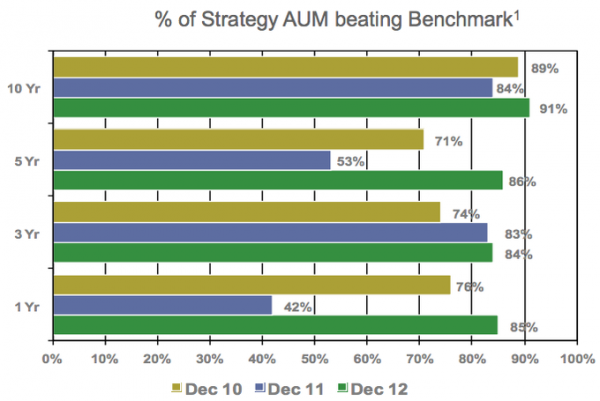 Recently, Legg Mason appointed Joseph Sullivan to be a new CEO. It seems to be a decent move, as Sullivan has spent nearly all of his life working for Legg Mason. Sullivan has been committed to Legg Mason’s turnaround. For instance, he has discussed equity offering for the firm’s executives. Sullivan commented that offering equity to managers would give them real ownership, which could help to recruit and retain executives.

Gabelli liked Legg Mason, as the firm has kept buying back its stocks. The firm has reduced its number of shares outstanding from 164 million to only 128 million. In addition, it also announced that it would spend two thirds of the cash flow to repurchase more stock. Gabelli said: “They’re in the investment business, great cash generator, and they’re solving a lot of their issues.” On Feb. 8, Gabelli increased his stake in Legg Mason by more than 32%. Thus, he owns more than 4.9 million shares, accounting for more than 3.8% of total shares outstanding.

How the Power of Incentives Is Punishing Your 401(k): Bank of America Corp (...
Monthly Newsletter Strategy
Download a free copy of our newsletter and see the details inside!
Hedge Fund Resource Center
Billionaire Hedge Funds