A whopping number of 13F filings filed with U.S. Securities and Exchange Commission has been processed by Insider Monkey so that individual investors can look at the overall hedge fund sentiment towards the stocks included in their watchlists. These freshly-submitted public filings disclose money managers’ equity positions as of the end of the three-month period that ended June 28, so let’s proceed with the discussion of the hedge fund sentiment on Wintrust Financial Corporation (NASDAQ:WTFC).

Hedge fund interest in Wintrust Financial Corporation (NASDAQ:WTFC) shares was flat at the end of last quarter. This is usually a negative indicator. The level and the change in hedge fund popularity aren’t the only variables you need to analyze to decipher hedge funds’ perspectives. A stock may witness a boost in popularity but it may still be less popular than similarly priced stocks. That’s why at the end of this article we will examine companies such as Tribune Media Company (NYSE:TRCO), Tempur Sealy International Inc. (NYSE:TPX), and The Brink’s Company (NYSE:BCO) to gather more data points. Our calculations also showed that WTFC isn’t among the 30 most popular stocks among hedge funds (view the video below).

According to most shareholders, hedge funds are viewed as underperforming, outdated investment vehicles of yesteryear. While there are greater than 8000 funds in operation at present, Our researchers look at the moguls of this club, around 750 funds. It is estimated that this group of investors shepherd most of all hedge funds’ total capital, and by tracking their highest performing picks, Insider Monkey has unearthed several investment strategies that have historically outstripped Mr. Market. Insider Monkey’s flagship hedge fund strategy exceeded the S&P 500 index by around 5 percentage points annually since its inception in May 2014. We were able to generate large returns even by identifying short candidates. Our portfolio of short stocks lost 25.7% since February 2017 (through September 30th) even though the market was up more than 33% during the same period. We just shared a list of 10 short targets in our latest quarterly update . 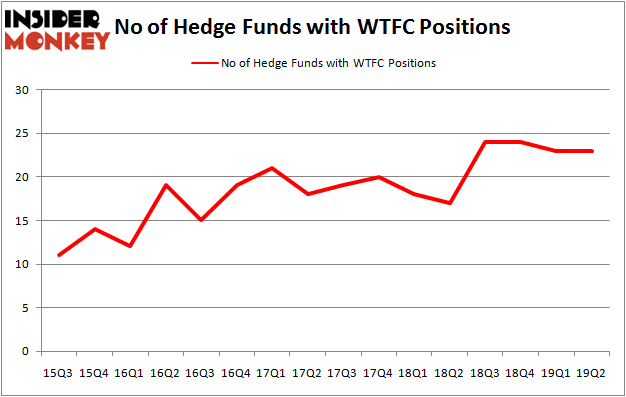 When looking at the institutional investors followed by Insider Monkey, Millennium Management, managed by Israel Englander, holds the biggest position in Wintrust Financial Corporation (NASDAQ:WTFC). Millennium Management has a $103.7 million position in the stock, comprising 0.2% of its 13F portfolio. The second most bullish fund manager is Ken Griffin of Citadel Investment Group, with a $88.4 million position; the fund has less than 0.1%% of its 13F portfolio invested in the stock. Other professional money managers with similar optimism include Ken Fisher’s Fisher Asset Management, Ravi Chopra’s Azora Capital and Cliff Asness’s AQR Capital Management.

Seeing as Wintrust Financial Corporation (NASDAQ:WTFC) has witnessed a decline in interest from the entirety of the hedge funds we track, we can see that there were a few hedge funds who were dropping their entire stakes in the second quarter. Interestingly, Andrew Feldstein and Stephen Siderow’s Blue Mountain Capital sold off the biggest position of the 750 funds tracked by Insider Monkey, totaling an estimated $6.1 million in stock. Sander Gerber’s fund, Hudson Bay Capital Management, also sold off its stock, about $4.7 million worth. These transactions are important to note, as aggregate hedge fund interest stayed the same (this is a bearish signal in our experience).

Let’s check out hedge fund activity in other stocks – not necessarily in the same industry as Wintrust Financial Corporation (NASDAQ:WTFC) but similarly valued. We will take a look at Tribune Media Company (NYSE:TRCO), Tempur Sealy International Inc. (NYSE:TPX), The Brink’s Company (NYSE:BCO), and IBERIABANK Corporation (NASDAQ:IBKC). All of these stocks’ market caps are similar to WTFC’s market cap.

As you can see these stocks had an average of 29 hedge funds with bullish positions and the average amount invested in these stocks was $845 million. That figure was $394 million in WTFC’s case. Tempur Sealy International Inc. (NYSE:TPX) is the most popular stock in this table. On the other hand IBERIABANK Corporation (NASDAQ:IBKC) is the least popular one with only 25 bullish hedge fund positions. Compared to these stocks Wintrust Financial Corporation (NASDAQ:WTFC) is even less popular than IBKC. Hedge funds dodged a bullet by taking a bearish stance towards WTFC. Our calculations showed that the top 20 most popular hedge fund stocks returned 24.4% in 2019 through September 30th and outperformed the S&P 500 ETF (SPY) by 4 percentage points. Unfortunately WTFC wasn’t nearly as popular as these 20 stocks (hedge fund sentiment was very bearish); WTFC investors were disappointed as the stock returned -11.3% during the third quarter and underperformed the market. If you are interested in investing in large cap stocks with huge upside potential, you should check out the top 20 most popular stocks among hedge funds as many of these stocks already outperformed the market so far in 2019.