The elite funds run by legendary investors such as David Tepper and Dan Loeb make hundreds of millions of dollars for themselves and their investors by spending enormous resources doing research on small cap stocks that big investment banks don’t follow. Because of their pay structures, they have strong incentives to do the research necessary to beat the market. That’s why we pay close attention to what they think in small cap stocks. In this article, we take a closer look at Voyager Therapeutics, Inc. (NASDAQ:VYGR) from the perspective of those elite funds.

Hedge fund interest in Voyager Therapeutics, Inc. (NASDAQ:VYGR) shares was flat at the end of last quarter. This is usually a negative indicator. The level and the change in hedge fund popularity aren’t the only variables you need to analyze to decipher hedge funds’ perspectives. A stock may witness a boost in popularity but it may still be less popular than similarly priced stocks. That’s why at the end of this article we will examine companies such as Milacron Holdings Corp (NYSE:MCRN), SecureWorks Corp. (NASDAQ:SCWX), and H&E Equipment Services, Inc. (NASDAQ:HEES) to gather more data points. Our calculations also showed that VYGR isn’t among the 30 most popular stocks among hedge funds (see the video below).

Today there are a multitude of formulas investors have at their disposal to value their holdings. A couple of the most useful formulas are hedge fund and insider trading sentiment. Our researchers have shown that, historically, those who follow the best picks of the top hedge fund managers can beat the market by a significant amount (see the details here).

How have hedgies been trading Voyager Therapeutics, Inc. (NASDAQ:VYGR)? 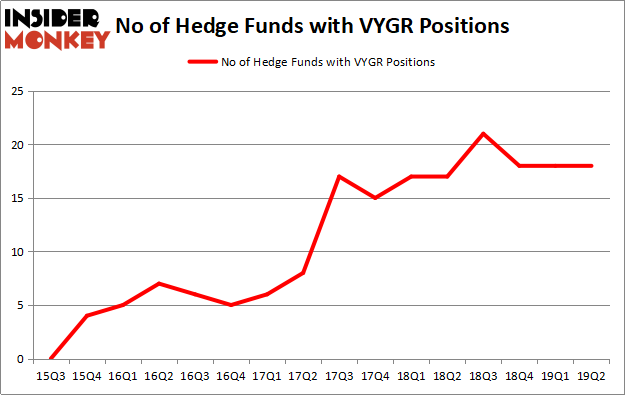 The largest stake in Voyager Therapeutics, Inc. (NASDAQ:VYGR) was held by Partner Fund Management, which reported holding $57.6 million worth of stock at the end of March. It was followed by Casdin Capital with a $30.7 million position. Other investors bullish on the company included Armistice Capital, Farallon Capital, and Renaissance Technologies.

Because Voyager Therapeutics, Inc. (NASDAQ:VYGR) has faced a decline in interest from the entirety of the hedge funds we track, it’s easy to see that there exists a select few funds who were dropping their entire stakes by the end of the second quarter. Interestingly, Phill Gross and Robert Atchinson’s Adage Capital Management dumped the biggest position of the “upper crust” of funds followed by Insider Monkey, totaling an estimated $7.2 million in stock. Mark Lampert’s fund, Biotechnology Value Fund / BVF Inc, also said goodbye to its stock, about $5.9 million worth. These moves are intriguing to say the least, as aggregate hedge fund interest stayed the same (this is a bearish signal in our experience).

As you can see these stocks had an average of 10.75 hedge funds with bullish positions and the average amount invested in these stocks was $42 million. That figure was $195 million in VYGR’s case. Milacron Holdings Corp (NYSE:MCRN) is the most popular stock in this table. On the other hand SecureWorks Corp. (NASDAQ:SCWX) is the least popular one with only 9 bullish hedge fund positions. Compared to these stocks Voyager Therapeutics, Inc. (NASDAQ:VYGR) is more popular among hedge funds. Our calculations showed that top 20 most popular stocks among hedge funds returned 24.4% in 2019 through September 30th and outperformed the S&P 500 ETF (SPY) by 4 percentage points. Unfortunately VYGR wasn’t nearly as popular as these 20 stocks and hedge funds that were betting on VYGR were disappointed as the stock returned -36.8% during the third quarter and underperformed the market. If you are interested in investing in large cap stocks with huge upside potential, you should check out the top 20 most popular stocks among hedge funds as many of these stocks already outperformed the market in Q3.