Is Vornado Realty Trust (VNO) A Good Stock To Buy?

There are several ways to beat the market, and investing in small cap stocks has historically been one of them. We like to improve the odds of beating the market further by examining what famous hedge fund operators such as Jeff Ubben, George Soros and Carl Icahn think. Those hedge fund operators make billions of dollars each year by hiring the best and the brightest to do research on stocks, including small cap stocks that big brokerage houses simply don’t cover. Because of Carl Icahn and other elite funds’ exemplary historical records, we pay attention to their small cap picks. In this article, we use hedge fund filing data to analyze Vornado Realty Trust (NYSE:VNO).

Is Vornado Realty Trust (NYSE:VNO) a good investment right now? The best stock pickers are becoming less hopeful. The number of long hedge fund bets dropped by 3 in recent months. Our calculations also showed that VNO isn’t among the 30 most popular stocks among hedge funds (view the video below). 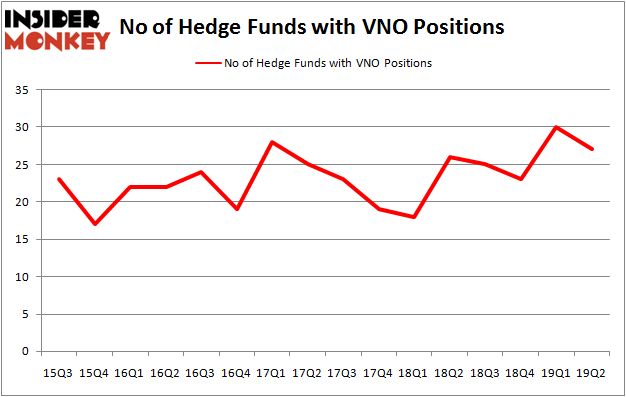 Unlike some fund managers who are betting on Dow reaching 40000 in a year, our long-short investment strategy doesn’t rely on bull markets to deliver double digit returns. We only rely on hedge fund buy/sell signals. We’re going to take a look at the recent hedge fund action surrounding Vornado Realty Trust (NYSE:VNO).

When looking at the institutional investors followed by Insider Monkey, John Khoury’s Long Pond Capital has the biggest position in Vornado Realty Trust (NYSE:VNO), worth close to $299.6 million, accounting for 9% of its total 13F portfolio. Coming in second is Winton Capital Management, led by David Harding, holding a $35.9 million position; the fund has 0.7% of its 13F portfolio invested in the stock. Some other peers that are bullish contain Paul Singer’s Elliott Management, Dmitry Balyasny’s Balyasny Asset Management and Martin Whitman’s Third Avenue Management.

Judging by the fact that Vornado Realty Trust (NYSE:VNO) has witnessed a decline in interest from the aggregate hedge fund industry, it’s easy to see that there exists a select few hedge funds who were dropping their positions entirely last quarter. It’s worth mentioning that Paul Singer’s Elliott Management dropped the largest investment of the “upper crust” of funds watched by Insider Monkey, totaling close to $47.2 million in stock, and Josh Donfeld and David Rogers’s Castle Hook Partners was right behind this move, as the fund sold off about $1.7 million worth. These transactions are important to note, as aggregate hedge fund interest dropped by 3 funds last quarter.

As you can see these stocks had an average of 38.25 hedge funds with bullish positions and the average amount invested in these stocks was $1567 million. That figure was $534 million in VNO’s case. Ally Financial Inc (NYSE:ALLY) is the most popular stock in this table. On the other hand Elanco Animal Health Incorporated (NYSE:ELAN) is the least popular one with only 27 bullish hedge fund positions. Compared to these stocks Vornado Realty Trust (NYSE:VNO) is even less popular than ELAN. Hedge funds dodged a bullet by taking a bearish stance towards VNO. Our calculations showed that the top 20 most popular hedge fund stocks returned 24.4% in 2019 through September 30th and outperformed the S&P 500 ETF (SPY) by 4 percentage points. Unfortunately VNO wasn’t nearly as popular as these 20 stocks (hedge fund sentiment was very bearish); VNO investors were disappointed as the stock returned 0.4% during the third quarter and underperformed the market. If you are interested in investing in large cap stocks with huge upside potential, you should check out the top 20 most popular stocks among hedge funds as many of these stocks already outperformed the market so far in 2019.