Is Visteon Corp (VC) A Good Stock To Buy?

We can judge whether Visteon Corp (NASDAQ:VC) is a good investment right now by following the lead of some of the best investors in the world and piggybacking their ideas. There’s no better way to get these firms’ immense resources and analytical capabilities working for us than to follow their lead into their best ideas. While not all of these picks will be winners, our research shows that these picks historically outperformed the market when we factor in known risk factors.

Visteon Corp (NASDAQ:VC) investors should pay attention to an increase in support from the world’s most elite money managers recently. Our calculations also showed that VC isn’t among the 30 most popular stocks among hedge funds (click for Q3 rankings and see the video below for Q2 rankings).

Unlike the largest US hedge funds that are convinced Dow will soar past 40,000 or the world’s most bearish hedge fund that’s more convinced than ever that a crash is coming, our long-short investment strategy doesn’t rely on bull or bear markets to deliver double digit returns. We only rely on the best performing hedge funds‘ buy/sell signals. We’re going to review the key hedge fund action surrounding Visteon Corp (NASDAQ:VC).

At the end of the third quarter, a total of 20 of the hedge funds tracked by Insider Monkey were long this stock, a change of 18% from the previous quarter. On the other hand, there were a total of 22 hedge funds with a bullish position in VC a year ago. With hedge funds’ sentiment swirling, there exists a select group of notable hedge fund managers who were upping their stakes substantially (or already accumulated large positions). 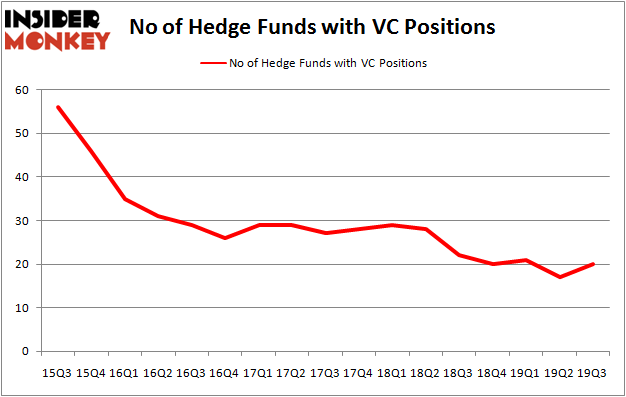 When looking at the institutional investors followed by Insider Monkey, Iridian Asset Management, managed by David Cohen and Harold Levy, holds the most valuable position in Visteon Corp (NASDAQ:VC). Iridian Asset Management has a $146.8 million position in the stock, comprising 2.3% of its 13F portfolio. The second most bullish fund manager is Citadel Investment Group, led by Ken Griffin, holding a $76.8 million position; the fund has less than 0.1%% of its 13F portfolio invested in the stock. Other peers with similar optimism contain Douglas T. Granat’s Trigran Investments, Israel Englander’s Millennium Management and Gregg J. Powers’s Private Capital Management. In terms of the portfolio weights assigned to each position Trigran Investments allocated the biggest weight to Visteon Corp (NASDAQ:VC), around 8.08% of its 13F portfolio. Albar Capital is also relatively very bullish on the stock, dishing out 4.67 percent of its 13F equity portfolio to VC.

As industrywide interest jumped, key money managers were breaking ground themselves. Point72 Asset Management, managed by Steve Cohen, assembled the most outsized position in Visteon Corp (NASDAQ:VC). Point72 Asset Management had $21.6 million invested in the company at the end of the quarter. Christopher James’s Partner Fund Management also initiated a $12.3 million position during the quarter. The other funds with new positions in the stock are Dmitry Balyasny’s Balyasny Asset Management, Richard Driehaus’s Driehaus Capital, and Phill Gross and Robert Atchinson’s Adage Capital Management.

Let’s check out hedge fund activity in other stocks – not necessarily in the same industry as Visteon Corp (NASDAQ:VC) but similarly valued. We will take a look at Glaukos Corporation (NYSE:GKOS), LCI Industries (NYSE:LCII), Beacon Roofing Supply, Inc. (NASDAQ:BECN), and Natera Inc (NASDAQ:NTRA). This group of stocks’ market valuations are similar to VC’s market valuation.

As you can see these stocks had an average of 17 hedge funds with bullish positions and the average amount invested in these stocks was $192 million. That figure was $417 million in VC’s case. Natera Inc (NASDAQ:NTRA) is the most popular stock in this table. On the other hand Glaukos Corporation (NYSE:GKOS) is the least popular one with only 11 bullish hedge fund positions. Visteon Corp (NASDAQ:VC) is not the most popular stock in this group but hedge fund interest is still above average. Our calculations showed that top 20 most popular stocks among hedge funds returned 37.4% in 2019 through the end of November and outperformed the S&P 500 ETF (SPY) by 9.9 percentage points. Hedge funds were also right about betting on VC as the stock returned 13.3% during the fourth quarter (through the end of November) and outperformed the market. Hedge funds were rewarded for their relative bullishness.