Is Vipshop Holdings Limited (NYSE:VIPS) going to take off soon? Prominent investors are in a pessimistic mood. The number of bullish hedge fund positions were trimmed by 5 lately. Our calculations also showed that vips isn’t among the 30 most popular stocks among hedge funds. VIPS was in 22 hedge funds’ portfolios at the end of September. There were 27 hedge funds in our database with VIPS positions at the end of the previous quarter. 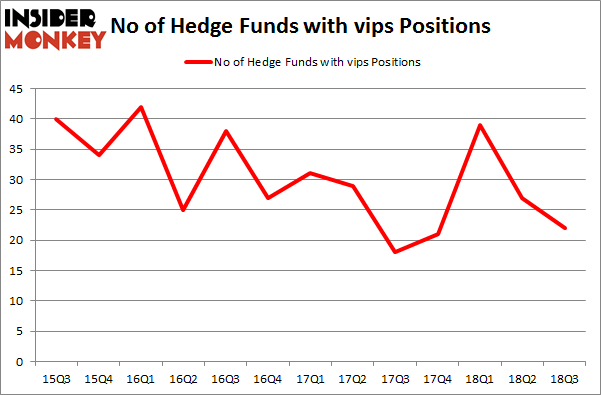 Seeing as Vipshop Holdings Limited (NYSE:VIPS) has witnessed bearish sentiment from the smart money, logic holds that there is a sect of funds that elected to cut their entire stakes in the third quarter. It’s worth mentioning that Adam Wolfberg and Steven Landry’s EastBay Asset Management dumped the largest stake of the 700 funds followed by Insider Monkey, totaling an estimated $35.5 million in stock, and Beeneet Kothari’s Tekne Capital Management was right behind this move, as the fund said goodbye to about $16.5 million worth. These transactions are important to note, as total hedge fund interest fell by 5 funds in the third quarter.

As you can see these stocks had an average of 18.25 hedge funds with bullish positions and the average amount invested in these stocks was $351 million. That figure was $130 million in VIPS’s case. Yelp Inc (NYSE:YELP) is the most popular stock in this table. On the other hand Sabra Health Care REIT Inc (NASDAQ:SBRA) is the least popular one with only 9 bullish hedge fund positions. Vipshop Holdings Limited (NYSE:VIPS) is not the most popular stock in this group but hedge fund interest is still above average. This is a slightly positive signal but we’d rather spend our time researching stocks that hedge funds are piling on. In this regard YELP might be a better candidate to consider a long position.