Is Vipshop Holdings Limited (VIPS) A Good Stock To Buy ?

We can judge whether Vipshop Holdings Limited (NYSE:VIPS) is a good investment right now by following the lead of some of the best investors in the world and piggybacking their ideas. There’s no better way to get these firms’ immense resources and analytical capabilities working for us than to follow their lead into their best ideas. While not all of these picks will be winners, our research shows that these picks historically outperformed the market when we factor in known risk factors.

Hedge fund interest in Vipshop Holdings Limited (NYSE:VIPS) shares was flat at the end of last quarter. This is usually a negative indicator. At the end of this article we will also compare VIPS to other stocks including Cullen/Frost Bankers, Inc. (NYSE:CFR), InterXion Holding NV (NYSE:INXN), and World Wrestling Entertainment, Inc. (NYSE:WWE) to get a better sense of its popularity. Our calculations also showed that VIPS isn’t among the 30 most popular stocks among hedge funds (view the video below).

At the moment there are a multitude of gauges stock market investors put to use to grade their stock investments. Some of the most under-the-radar gauges are hedge fund and insider trading sentiment. Our researchers have shown that, historically, those who follow the top picks of the elite investment managers can beat the S&P 500 by a solid amount (see the details here). 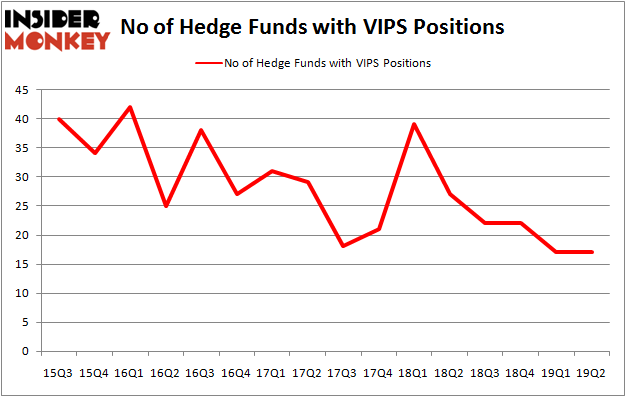 Unlike some fund managers who are betting on Dow reaching 40000 in a year, our long-short investment strategy doesn’t rely on bull markets to deliver double digit returns. We only rely on hedge fund buy/sell signals. Let’s take a gander at the recent hedge fund action surrounding Vipshop Holdings Limited (NYSE:VIPS).

What does smart money think about Vipshop Holdings Limited (NYSE:VIPS)?

At Q2’s end, a total of 17 of the hedge funds tracked by Insider Monkey were bullish on this stock, a change of 0% from one quarter earlier. The graph below displays the number of hedge funds with bullish position in VIPS over the last 16 quarters. With the smart money’s positions undergoing their usual ebb and flow, there exists an “upper tier” of notable hedge fund managers who were upping their holdings meaningfully (or already accumulated large positions).

The largest stake in Vipshop Holdings Limited (NYSE:VIPS) was held by Keywise Capital Management, which reported holding $60.1 million worth of stock at the end of March. It was followed by Indus Capital with a $21.4 million position. Other investors bullish on the company included Renaissance Technologies, Millennium Management, and AQR Capital Management.

Due to the fact that Vipshop Holdings Limited (NYSE:VIPS) has faced declining sentiment from the smart money, it’s easy to see that there lies a certain “tier” of fund managers that decided to sell off their positions entirely heading into Q3. Intriguingly, Nitin Saigal and Dan Jacobs’s Kora Management dumped the biggest position of all the hedgies watched by Insider Monkey, worth about $13 million in call options, and Panayotis Takis Sparaggis’s Alkeon Capital Management was right behind this move, as the fund dropped about $5.6 million worth. These bearish behaviors are interesting, as total hedge fund interest stayed the same (this is a bearish signal in our experience).

As you can see these stocks had an average of 25.25 hedge funds with bullish positions and the average amount invested in these stocks was $458 million. That figure was $154 million in VIPS’s case. World Wrestling Entertainment, Inc. (NYSE:WWE) is the most popular stock in this table. On the other hand Companhia Siderurgica Nacional (NYSE:SID) is the least popular one with only 10 bullish hedge fund positions. Vipshop Holdings Limited (NYSE:VIPS) is not the least popular stock in this group but hedge fund interest is still below average. Our calculations showed that top 20 most popular stocks among hedge funds returned 24.4% in 2019 through September 30th and outperformed the S&P 500 ETF (SPY) by 4 percentage points. A small number of hedge funds were also right about betting on VIPS, though not to the same extent, as the stock returned 3.4% during the third quarter and outperformed the market.