“The global economic environment is very favorable for investors. Economies are generally strong, but not too strong. Employment levels are among the strongest for many decades. Interest rates are paused at very low levels, and the risk of significant increases in the medium term seems low. Financing for transactions is freely available to good borrowers, but not in major excess. Covenants are lighter than they were five years ago, but the extreme excesses seen in the past do not seem prevalent yet today. Despite this apparent ‘goldilocks’ market environment, we continue to worry about a world where politics are polarized almost everywhere, interest rates are low globally, and equity valuations are at their peak,” are the words of Brookfield Asset Management. Brookfield was right about politics as stocks experienced their second worst May since the 1960s due to escalation of trade disputes. We pay attention to what hedge funds are doing in a particular stock before considering a potential investment because it works for us. So let’s take a glance at the smart money sentiment towards Viking Therapeutics, Inc. (NASDAQ:VKTX) and see how it was affected.

Is Viking Therapeutics, Inc. (NASDAQ:VKTX) ready to rally soon? Investors who are in the know are in a pessimistic mood. The number of bullish hedge fund positions shrunk by 2 in recent months. Our calculations also showed that VKTX isn’t among the 30 most popular stocks among hedge funds (click for Q3 rankings and see the video below for Q2 rankings).

In the eyes of most investors, hedge funds are perceived as underperforming, outdated financial vehicles of yesteryear. While there are greater than 8000 funds trading today, Our researchers hone in on the masters of this group, around 750 funds. These hedge fund managers watch over most of the smart money’s total asset base, and by watching their matchless equity investments, Insider Monkey has spotted various investment strategies that have historically exceeded the S&P 500 index. Insider Monkey’s flagship short hedge fund strategy outrun the S&P 500 short ETFs by around 20 percentage points per year since its inception in May 2014. Our portfolio of short stocks lost 27.8% since February 2017 (through November 21st) even though the market was up more than 39% during the same period. We just shared a list of 7 short targets in our latest quarterly update .

We leave no stone unturned when looking for the next great investment idea. For example Europe is set to become the world’s largest cannabis market, so we check out this European marijuana stock pitch. One of the most bullish analysts in America just put his money where his mouth is. He says, “I’m investing more today than I did back in early 2009.” So we check out his pitch. We read hedge fund investor letters and listen to stock pitches at hedge fund conferences. We also rely on the best performing hedge funds‘ buy/sell signals. We’re going to check out the key hedge fund action encompassing Viking Therapeutics, Inc. (NASDAQ:VKTX).

What does smart money think about Viking Therapeutics, Inc. (NASDAQ:VKTX)?

At Q3’s end, a total of 15 of the hedge funds tracked by Insider Monkey were bullish on this stock, a change of -12% from the second quarter of 2019. By comparison, 27 hedge funds held shares or bullish call options in VKTX a year ago. With the smart money’s sentiment swirling, there exists an “upper tier” of notable hedge fund managers who were upping their holdings significantly (or already accumulated large positions). 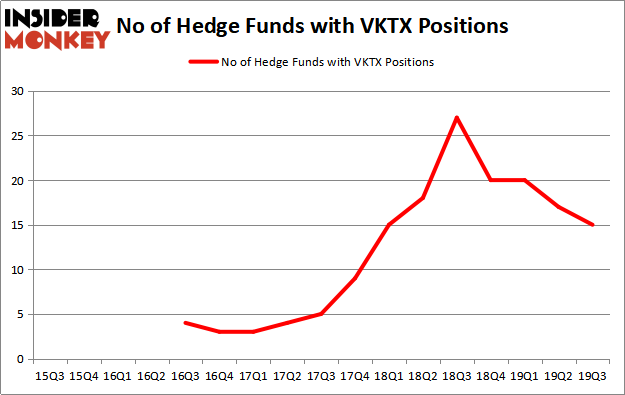 Of the funds tracked by Insider Monkey, Peter S. Park’s Park West Asset Management has the largest position in Viking Therapeutics, Inc. (NASDAQ:VKTX), worth close to $12 million, accounting for 0.6% of its total 13F portfolio. The second largest stake is held by Sio Capital, led by Michael Castor, holding a $5.2 million position; the fund has 1.7% of its 13F portfolio invested in the stock. Other hedge funds and institutional investors that hold long positions include David Rosen’s Rubric Capital Management, Julian Baker and Felix Baker’s Baker Bros. Advisors and Ken Griffin’s Citadel Investment Group. In terms of the portfolio weights assigned to each position Healthcare Value Capital allocated the biggest weight to Viking Therapeutics, Inc. (NASDAQ:VKTX), around 3.11% of its 13F portfolio. Sio Capital is also relatively very bullish on the stock, designating 1.67 percent of its 13F equity portfolio to VKTX.

Seeing as Viking Therapeutics, Inc. (NASDAQ:VKTX) has witnessed a decline in interest from the smart money, it’s easy to see that there exists a select few money managers that elected to cut their entire stakes heading into Q4. It’s worth mentioning that James A. Silverman’s Opaleye Management said goodbye to the biggest position of the “upper crust” of funds followed by Insider Monkey, comprising an estimated $3.3 million in stock. Michael S. Weiss and Lindsay A. Rosenwald’s fund, Opus Point Partners Management, also cut its stock, about $0.4 million worth. These moves are intriguing to say the least, as aggregate hedge fund interest dropped by 2 funds heading into Q4.

As you can see these stocks had an average of 7.25 hedge funds with bullish positions and the average amount invested in these stocks was $25 million. That figure was $36 million in VKTX’s case. Fortuna Silver Mines Inc. (NYSE:FSM) is the most popular stock in this table. On the other hand Carter Bank & Trust (NASDAQ:CARE) is the least popular one with only 4 bullish hedge fund positions. Compared to these stocks Viking Therapeutics, Inc. (NASDAQ:VKTX) is more popular among hedge funds. Our calculations showed that top 20 most popular stocks among hedge funds returned 37.4% in 2019 through the end of November and outperformed the S&P 500 ETF (SPY) by 9.9 percentage points. Hedge funds were also right about betting on VKTX, though not to the same extent, as the stock returned 6.4% during the fourth quarter (through the end of November) and outperformed the market as well.