Like everyone else, elite investors make mistakes. Some of their top consensus picks, such as Amazon, Facebook and Alibaba, have not done well in Q4 due to various reasons. Nevertheless, the data show elite investors’ consensus picks have done well on average over the long-term. The top 15 S&P 500 stocks among hedge funds at the end of September 2018 returned an average of 1% through March 15th whereas the S&P 500 Index ETF lost 2.2% during the same period. Because their consensus picks have done well, we pay attention to what elite funds think before doing extensive research on a stock. In this article, we take a closer look at Vertex Pharmaceuticals Incorporated (NASDAQ:VRTX) from the perspective of those elite funds.

Vertex Pharmaceuticals Incorporated (NASDAQ:VRTX) has seen a decrease in support from the world’s most elite money managers of late. VRTX was in 39 hedge funds’ portfolios at the end of December. There were 41 hedge funds in our database with VRTX positions at the end of the previous quarter. Our calculations also showed that VRTX isn’t among the 30 most popular stocks among hedge funds.

What have hedge funds been doing with Vertex Pharmaceuticals Incorporated (NASDAQ:VRTX)?

Heading into the first quarter of 2019, a total of 39 of the hedge funds tracked by Insider Monkey held long positions in this stock, a change of -5% from the previous quarter. Below, you can check out the change in hedge fund sentiment towards VRTX over the last 14 quarters. With hedgies’ sentiment swirling, there exists a select group of notable hedge fund managers who were boosting their holdings considerably (or already accumulated large positions). 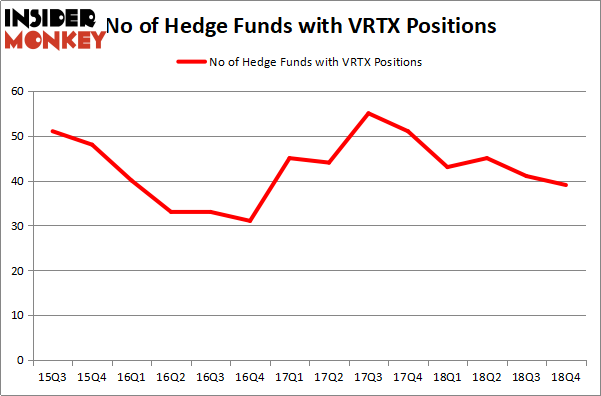 More specifically, Renaissance Technologies was the largest shareholder of Vertex Pharmaceuticals Incorporated (NASDAQ:VRTX), with a stake worth $718.2 million reported as of the end of September. Trailing Renaissance Technologies was Millennium Management, which amassed a stake valued at $204 million. D E Shaw, OrbiMed Advisors, and Citadel Investment Group were also very fond of the stock, giving the stock large weights in their portfolios.

Since Vertex Pharmaceuticals Incorporated (NASDAQ:VRTX) has witnessed declining sentiment from the smart money, we can see that there lies a certain “tier” of fund managers that decided to sell off their full holdings heading into Q3. Interestingly, Samuel Isaly’s OrbiMed Advisors cut the biggest stake of the “upper crust” of funds tracked by Insider Monkey, worth close to $19.3 million in stock. Glenn Russell Dubin’s fund, Highbridge Capital Management, also dumped its stock, about $2.7 million worth. These bearish behaviors are interesting, as aggregate hedge fund interest fell by 2 funds heading into Q3.

As you can see these stocks had an average of 22.75 hedge funds with bullish positions and the average amount invested in these stocks was $847 million. That figure was $2271 million in VRTX’s case. FedEx Corporation (NYSE:FDX) is the most popular stock in this table. On the other hand ING Groep N.V. (NYSE:ING) is the least popular one with only 7 bullish hedge fund positions. Vertex Pharmaceuticals Incorporated (NASDAQ:VRTX) is not the most popular stock in this group but hedge fund interest is still above average. This is a slightly positive signal but we’d rather spend our time researching stocks that hedge funds are piling on. Our calculations showed that top 15 most popular stocks among hedge funds returned 19.7% through March 15th and outperformed the S&P 500 ETF (SPY) by 6.6 percentage points. Hedge funds were also right about betting on VRTX, though not to the same extent, as the stock returned 13.5% and outperformed the market as well.