Is Vanda Pharmaceuticals Inc. (VNDA) A Good Stock To Buy?

A market surge in the first quarter, spurred by easing global macroeconomic concerns and Powell’s pivot ended up having a positive impact on the markets and many hedge funds as a result. The stocks of smaller companies which were especially hard hit during the fourth quarter slightly outperformed the market during the first quarter. Unfortunately, Trump is unpredictable and volatility returned in the second quarter and smaller-cap stocks went back to selling off. We finished compiling the latest 13F filings to get an idea about what hedge funds are thinking about the overall market as well as individual stocks. In this article we will study the hedge fund sentiment to see how those concerns affected their ownership of Vanda Pharmaceuticals Inc. (NASDAQ:VNDA) during the quarter.

Hedge fund interest in Vanda Pharmaceuticals Inc. (NASDAQ:VNDA) shares was flat at the end of last quarter. This is usually a negative indicator. The level and the change in hedge fund popularity aren’t the only variables you need to analyze to decipher hedge funds’ perspectives. A stock may witness a boost in popularity but it may still be less popular than similarly priced stocks. That’s why at the end of this article we will examine companies such as PC Connection, Inc. (NASDAQ:CNXN), CNX Midstream Partners LP (NYSE:CNXM), and RPT Realty (NYSE:RPT) to gather more data points.

What does the smart money think about Vanda Pharmaceuticals Inc. (NASDAQ:VNDA)? 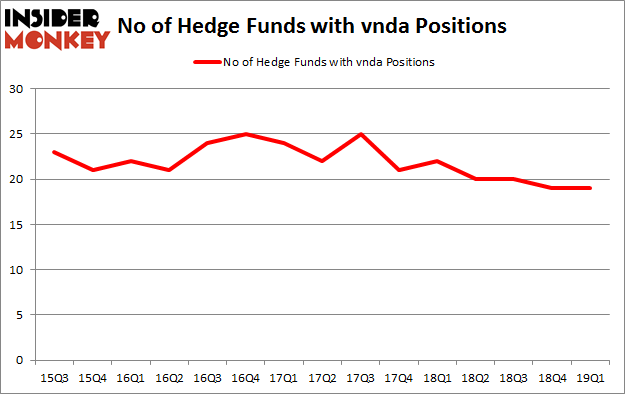 More specifically, Palo Alto Investors was the largest shareholder of Vanda Pharmaceuticals Inc. (NASDAQ:VNDA), with a stake worth $93 million reported as of the end of March. Trailing Palo Alto Investors was Consonance Capital Management, which amassed a stake valued at $78.4 million. Renaissance Technologies, Millennium Management, and Two Sigma Advisors were also very fond of the stock, giving the stock large weights in their portfolios.

Due to the fact that Vanda Pharmaceuticals Inc. (NASDAQ:VNDA) has faced a decline in interest from the entirety of the hedge funds we track, we can see that there exists a select few fund managers that elected to cut their full holdings in the third quarter. It’s worth mentioning that Phill Gross and Robert Atchinson’s Adage Capital Management dumped the biggest stake of the 700 funds followed by Insider Monkey, comprising about $36.6 million in stock. Peter Algert and Kevin Coldiron’s fund, Algert Coldiron Investors, also cut its stock, about $2 million worth. These moves are intriguing to say the least, as aggregate hedge fund interest stayed the same (this is a bearish signal in our experience).

As you can see these stocks had an average of 8.5 hedge funds with bullish positions and the average amount invested in these stocks was $36 million. That figure was $254 million in VNDA’s case. Independence Realty Trust Inc (NYSE:IRT) is the most popular stock in this table. On the other hand CNX Midstream Partners LP (NYSE:CNXM) is the least popular one with only 7 bullish hedge fund positions. Compared to these stocks Vanda Pharmaceuticals Inc. (NASDAQ:VNDA) is more popular among hedge funds. Our calculations showed that top 20 most popular stocks among hedge funds returned 1.9% in Q2 through May 30th and outperformed the S&P 500 ETF (SPY) by more than 3 percentage points. Unfortunately VNDA wasn’t nearly as popular as these 20 stocks and hedge funds that were betting on VNDA were disappointed as the stock returned -19.1% during the same period and underperformed the market. If you are interested in investing in large cap stocks with huge upside potential, you should check out the top 20 most popular stocks among hedge funds as 13 of these stocks already outperformed the market in Q2.