Is Vale SA (VALE) A Good Stock To Buy?

Legendary investors such as Jeffrey Talpins and Seth Klarman earn enormous amounts of money for themselves and their investors by doing in-depth research on small-cap stocks that big brokerage houses don’t publish. Small cap stocks -especially when they are screened well- can generate substantial outperformance versus a boring index fund. That’s why we analyze the activity of those elite funds in these small-cap stocks. In the following paragraphs, we analyze Vale SA (NYSE:VALE) from the perspective of those elite funds.

Vale SA (NYSE:VALE) was in 21 hedge funds’ portfolios at the end of June. VALE shareholders have witnessed a decrease in hedge fund sentiment lately. There were 22 hedge funds in our database with VALE positions at the end of the previous quarter. Our calculations also showed that VALE isn’t among the 30 most popular stocks among hedge funds (see the video below).

Unlike some fund managers who are betting on Dow reaching 40000 in a year, our long-short investment strategy doesn’t rely on bull markets to deliver double digit returns. We only rely on hedge fund buy/sell signals. Let’s analyze the latest hedge fund action encompassing Vale SA (NYSE:VALE). 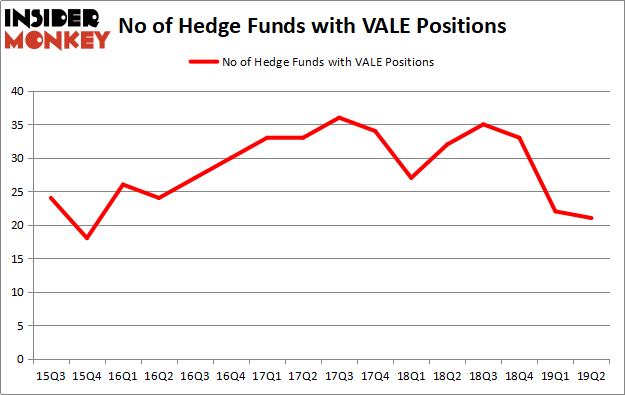 The largest stake in Vale SA (NYSE:VALE) was held by Renaissance Technologies, which reported holding $536 million worth of stock at the end of March. It was followed by Orbis Investment Management with a $473 million position. Other investors bullish on the company included Fisher Asset Management, Contrarian Capital, and AQR Capital Management.

Since Vale SA (NYSE:VALE) has witnessed falling interest from the aggregate hedge fund industry, logic holds that there was a specific group of hedge funds who sold off their full holdings heading into Q3. Interestingly, John Horseman’s Horseman Capital Management cut the largest stake of the “upper crust” of funds watched by Insider Monkey, comprising an estimated $19.6 million in stock, and Peter Rathjens, Bruce Clarke and John Campbell’s Arrowstreet Capital was right behind this move, as the fund said goodbye to about $18.5 million worth. These transactions are intriguing to say the least, as total hedge fund interest dropped by 1 funds heading into Q3.

Let’s check out hedge fund activity in other stocks – not necessarily in the same industry as Vale SA (NYSE:VALE) but similarly valued. We will take a look at Canadian National Railway Company (NYSE:CNI), Chubb Limited (NYSE:CB), ConocoPhillips (NYSE:COP), and Westpac Banking Corporation (NYSE:WBK). All of these stocks’ market caps match VALE’s market cap.

As you can see these stocks had an average of 28.25 hedge funds with bullish positions and the average amount invested in these stocks was $1562 million. That figure was $1848 million in VALE’s case. ConocoPhillips (NYSE:COP) is the most popular stock in this table. On the other hand Westpac Banking Corporation (NYSE:WBK) is the least popular one with only 3 bullish hedge fund positions. Vale SA (NYSE:VALE) is not the least popular stock in this group but hedge fund interest is still below average. This is a slightly negative signal and we’d rather spend our time researching stocks that hedge funds are piling on. Our calculations showed that top 20 most popular stocks among hedge funds returned 24.4% in 2019 through September 30th and outperformed the S&P 500 ETF (SPY) by 4 percentage points. Unfortunately VALE wasn’t nearly as popular as these 20 stocks (hedge fund sentiment was quite bearish); VALE investors were disappointed as the stock returned -14.4% during the third quarter and underperformed the market. If you are interested in investing in large cap stocks with huge upside potential, you should check out the top 20 most popular stocks among hedge funds as many of these stocks already outperformed the market so far in 2019.