It seems that the masses and most of the financial media hate hedge funds and what they do, but why is this hatred of hedge funds so prominent? At the end of the day, these asset management firms do not gamble the hard-earned money of the people who are on the edge of poverty. Truth be told, most hedge fund managers and other smaller players within this industry are very smart and skilled investors. Of course, they may also make wrong bets in some instances, but no one knows what the future holds and how market participants will react to the bountiful news that floods in each day. The Standard and Poor’s 500 Index returned approximately 20% in the first 9 months of this year (through September 30th). Conversely, hedge funds’ top 20 large-cap stock picks generated a return of 24% during the same 9-month period, with the majority of these stock picks outperforming the broader market benchmark. Coincidence? It might happen to be so, but it is unlikely. Our research covering the last 18 years indicates that hedge funds’ consensus stock picks generate superior risk-adjusted returns. That’s why we believe it isn’t a waste of time to check out hedge fund sentiment before you invest in a stock like United Fire Group, Inc. (NASDAQ:UFCS).

United Fire Group, Inc. (NASDAQ:UFCS) shares haven’t seen a lot of action during the second quarter. Overall, hedge fund sentiment was unchanged. The stock was in 10 hedge funds’ portfolios at the end of the second quarter of 2019. The level and the change in hedge fund popularity aren’t the only variables you need to analyze to decipher hedge funds’ perspectives. A stock may witness a boost in popularity but it may still be less popular than similarly priced stocks. That’s why at the end of this article we will examine companies such as Trupanion Inc (NASDAQ:TRUP), 1-800-FLOWERS.COM, Inc. (NASDAQ:FLWS), and Aerie Pharmaceuticals Inc (NASDAQ:AERI) to gather more data points. Our calculations also showed that UFCS isn’t among the 30 most popular stocks among hedge funds (see the video below).

To most investors, hedge funds are seen as unimportant, old financial tools of yesteryear. While there are more than 8000 funds with their doors open at the moment, Our experts hone in on the leaders of this club, approximately 750 funds. These money managers watch over the majority of the smart money’s total asset base, and by keeping an eye on their finest picks, Insider Monkey has unsheathed various investment strategies that have historically defeated the S&P 500 index. Insider Monkey’s flagship hedge fund strategy outrun the S&P 500 index by around 5 percentage points per year since its inception in May 2014. We were able to generate large returns even by identifying short candidates. Our portfolio of short stocks lost 25.7% since February 2017 (through September 30th) even though the market was up more than 33% during the same period. We just shared a list of 10 short targets in our latest quarterly update . 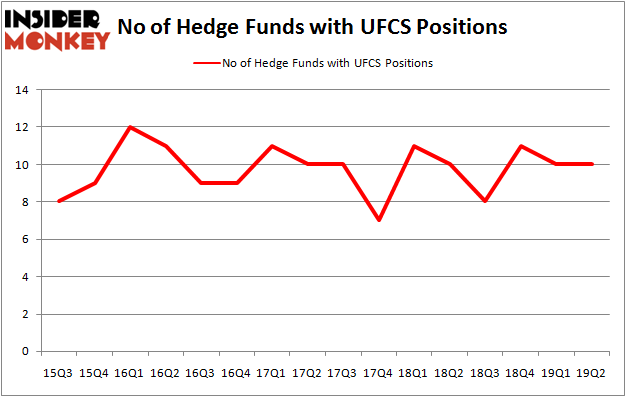 What have hedge funds been doing with United Fire Group, Inc. (NASDAQ:UFCS)?

Heading into the third quarter of 2019, a total of 10 of the hedge funds tracked by Insider Monkey were long this stock, a change of 0% from the first quarter of 2019. Below, you can check out the change in hedge fund sentiment towards UFCS over the last 16 quarters. With the smart money’s capital changing hands, there exists a select group of key hedge fund managers who were boosting their stakes substantially (or already accumulated large positions).

The largest stake in United Fire Group, Inc. (NASDAQ:UFCS) was held by Renaissance Technologies, which reported holding $7.6 million worth of stock at the end of March. It was followed by Millennium Management with a $3.2 million position. Other investors bullish on the company included Arrowstreet Capital, Citadel Investment Group, and AQR Capital Management.

Because United Fire Group, Inc. (NASDAQ:UFCS) has witnessed bearish sentiment from the smart money, it’s easy to see that there were a few funds that elected to cut their entire stakes by the end of the second quarter. It’s worth mentioning that John D. Gillespie’s Prospector Partners dumped the biggest position of the “upper crust” of funds monitored by Insider Monkey, comprising about $1.8 million in stock. Peter Muller’s fund, PDT Partners, also dumped its stock, about $0.3 million worth. These transactions are intriguing to say the least, as aggregate hedge fund interest stayed the same (this is a bearish signal in our experience).

Let’s go over hedge fund activity in other stocks – not necessarily in the same industry as United Fire Group, Inc. (NASDAQ:UFCS) but similarly valued. We will take a look at Trupanion Inc (NASDAQ:TRUP), 1-800-FLOWERS.COM, Inc. (NASDAQ:FLWS), Aerie Pharmaceuticals Inc (NASDAQ:AERI), and The E.W. Scripps Company (NASDAQ:SSP). All of these stocks’ market caps are similar to UFCS’s market cap.

As you can see these stocks had an average of 16.5 hedge funds with bullish positions and the average amount invested in these stocks was $183 million. That figure was $17 million in UFCS’s case. 1-800-FLOWERS.COM, Inc. (NASDAQ:FLWS) is the most popular stock in this table. On the other hand Trupanion Inc (NASDAQ:TRUP) is the least popular one with only 10 bullish hedge fund positions. Compared to these stocks United Fire Group, Inc. (NASDAQ:UFCS) is even less popular than TRUP. Hedge funds dodged a bullet by taking a bearish stance towards UFCS. Our calculations showed that the top 20 most popular hedge fund stocks returned 24.4% in 2019 through September 30th and outperformed the S&P 500 ETF (SPY) by 4 percentage points. Unfortunately UFCS wasn’t nearly as popular as these 20 stocks (hedge fund sentiment was very bearish); UFCS investors were disappointed as the stock returned -2.3% during the third quarter and underperformed the market. If you are interested in investing in large cap stocks with huge upside potential, you should check out the top 20 most popular stocks among hedge funds as many of these stocks already outperformed the market so far in 2019.