Is Trinity Industries, Inc. (TRN) A Good Stock To Buy?

The market has been volatile in the fourth quarter as the Federal Reserve continued its rate hikes to normalize the interest rates. Small cap stocks have been hit hard as a result, as the Russell 2000 ETF (IWM) has underperformed the larger S&P 500 ETF (SPY) by nearly 7 percentage points. SEC filings and hedge fund investor letters indicate that the smart money seems to be paring back their overall long exposure since summer months, and the funds’ movements is one of the reasons why the major indexes have retraced. In this article, we analyze what the smart money thinks of Trinity Industries, Inc. (NYSE:TRN) and find out how it is affected by hedge funds’ moves.

Is Trinity Industries, Inc. (NYSE:TRN) ready to rally soon? Money managers are selling. The number of long hedge fund bets decreased by 6 in recent months. Our calculations also showed that TRN isn’t among the 30 most popular stocks among hedge funds. TRN was in 27 hedge funds’ portfolios at the end of the fourth quarter of 2018. There were 33 hedge funds in our database with TRN positions at the end of the previous quarter.

Today there are plenty of tools market participants use to assess stocks. A couple of the less utilized tools are hedge fund and insider trading interest. We have shown that, historically, those who follow the best picks of the top fund managers can outclass their index-focused peers by a very impressive margin (see the details here).

How have hedgies been trading Trinity Industries, Inc. (NYSE:TRN)?

At Q4’s end, a total of 27 of the hedge funds tracked by Insider Monkey were long this stock, a change of -18% from the second quarter of 2018. On the other hand, there were a total of 32 hedge funds with a bullish position in TRN a year ago. With the smart money’s capital changing hands, there exists an “upper tier” of notable hedge fund managers who were increasing their stakes substantially (or already accumulated large positions). 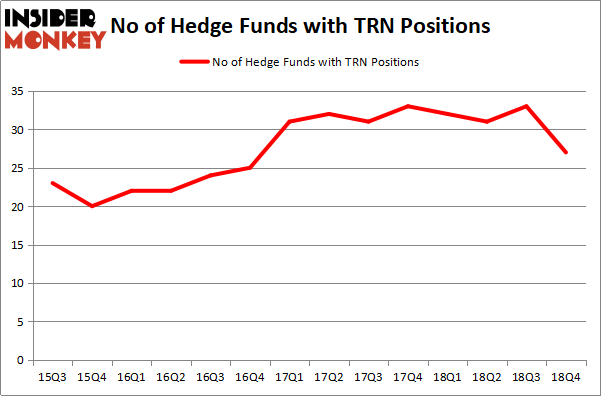 Of the funds tracked by Insider Monkey, Jeffrey Ubben’s ValueAct Capital has the number one position in Trinity Industries, Inc. (NYSE:TRN), worth close to $450.9 million, corresponding to 5.6% of its total 13F portfolio. On ValueAct Capital’s heels is Impala Asset Management, managed by Robert Bishop, which holds a $40.4 million position; the fund has 2.2% of its 13F portfolio invested in the stock. Other peers with similar optimism consist of Leon Cooperman’s Omega Advisors, Ken Griffin’s Citadel Investment Group and Ric Dillon’s Diamond Hill Capital.

Because Trinity Industries, Inc. (NYSE:TRN) has faced bearish sentiment from the entirety of the hedge funds we track, we can see that there lies a certain “tier” of money managers who were dropping their entire stakes by the end of the third quarter. Intriguingly, Peter Rathjens, Bruce Clarke and John Campbell’s Arrowstreet Capital dumped the biggest investment of the 700 funds monitored by Insider Monkey, valued at an estimated $23.3 million in stock. Lee Ainslie’s fund, Maverick Capital, also dropped its stock, about $8.3 million worth. These moves are important to note, as total hedge fund interest dropped by 6 funds by the end of the third quarter.