Is The Children’s Place Inc. (PLCE) Going to Burn These Hedge Funds?

The Children’s Place Inc. (NASDAQ:PLCE) has experienced a decrease in hedge fund interest recently. Our calculations also showed that PLCE isn’t among the 30 most popular stocks among hedge funds (see the video below).

What have hedge funds been doing with The Children’s Place Inc. (NASDAQ:PLCE)?

At the end of the second quarter, a total of 19 of the hedge funds tracked by Insider Monkey were bullish on this stock, a change of -14% from the previous quarter. On the other hand, there were a total of 25 hedge funds with a bullish position in PLCE a year ago. With the smart money’s sentiment swirling, there exists an “upper tier” of key hedge fund managers who were increasing their stakes significantly (or already accumulated large positions). 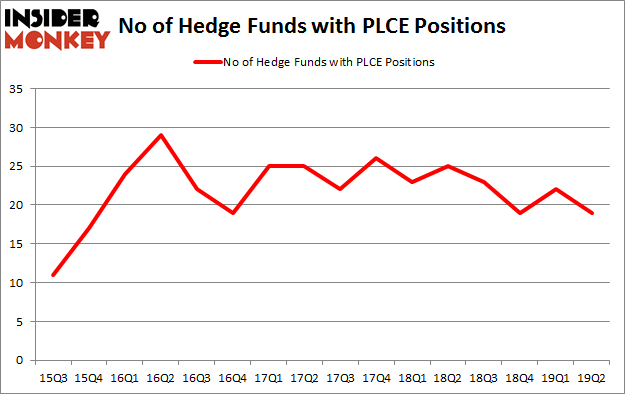 Among these funds, Balyasny Asset Management held the most valuable stake in The Children’s Place Inc. (NASDAQ:PLCE), which was worth $47.4 million at the end of the second quarter. On the second spot was Royce & Associates which amassed $45.7 million worth of shares. Moreover, Scopus Asset Management, Greenvale Capital, and Millennium Management were also bullish on The Children’s Place Inc. (NASDAQ:PLCE), allocating a large percentage of their portfolios to this stock.

Because The Children’s Place Inc. (NASDAQ:PLCE) has faced falling interest from the aggregate hedge fund industry, we can see that there lies a certain “tier” of hedge funds who were dropping their positions entirely heading into Q3. At the top of the heap, Mariko Gordon’s Daruma Asset Management said goodbye to the biggest stake of the “upper crust” of funds monitored by Insider Monkey, valued at an estimated $28.7 million in stock. Renaissance Technologies, also sold off its stock, about $24 million worth. These transactions are intriguing to say the least, as aggregate hedge fund interest fell by 3 funds heading into Q3.

Let’s go over hedge fund activity in other stocks – not necessarily in the same industry as The Children’s Place Inc. (NASDAQ:PLCE) but similarly valued. We will take a look at Rent-A-Center Inc (NASDAQ:RCII), Stratasys, Ltd. (NASDAQ:SSYS), Actuant Corporation (NYSE:ATU), and AnaptysBio, Inc. (NASDAQ:ANAB). This group of stocks’ market caps are closest to PLCE’s market cap.

As you can see these stocks had an average of 15.5 hedge funds with bullish positions and the average amount invested in these stocks was $357 million. That figure was $255 million in PLCE’s case. Rent-A-Center Inc (NASDAQ:RCII) is the most popular stock in this table. On the other hand Actuant Corporation (NYSE:ATU) is the least popular one with only 12 bullish hedge fund positions. Compared to these stocks The Children’s Place Inc. (NASDAQ:PLCE) is more popular among hedge funds. Our calculations showed that top 20 most popular stocks among hedge funds returned 24.4% in 2019 through September 30th and outperformed the S&P 500 ETF (SPY) by 4 percentage points. Unfortunately PLCE wasn’t nearly as popular as these 20 stocks and hedge funds that were betting on PLCE were disappointed as the stock returned -18.7% during the third quarter and underperformed the market. If you are interested in investing in large cap stocks with huge upside potential, you should check out the top 20 most popular stocks among hedge funds as many of these stocks already outperformed the market in Q3.