Is Tellurian Inc. (TELL) A Good Stock To Buy?

The Insider Monkey team has completed processing the quarterly 13F filings for the June quarter submitted by the hedge funds and other money managers included in our extensive database. Most hedge fund investors experienced strong gains on the back of a strong market performance, which certainly propelled them to adjust their equity holdings so as to maintain the desired risk profile. As a result, the relevancy of these public filings and their content is indisputable, as they may reveal numerous high-potential stocks. The following article will discuss the smart money sentiment towards Tellurian Inc. (NASDAQ:TELL).

Tellurian Inc. (NASDAQ:TELL) has experienced a decrease in activity from the world’s largest hedge funds lately. Our calculations also showed that TELL isn’t among the 30 most popular stocks among hedge funds (see the video below). 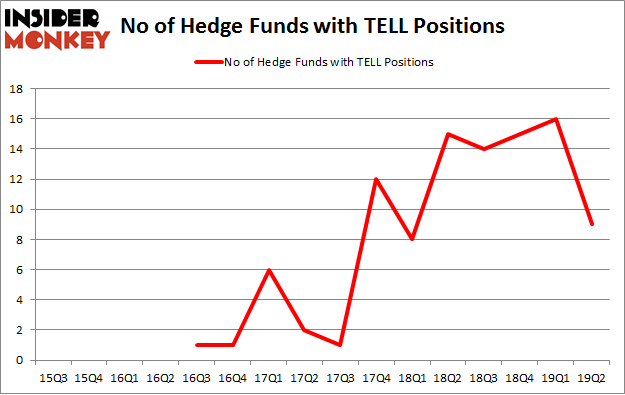 Among these funds, Electron Capital Partners held the most valuable stake in Tellurian Inc. (NASDAQ:TELL), which was worth $29.5 million at the end of the second quarter. On the second spot was Point72 Asset Management which amassed $14.7 million worth of shares. Moreover, Yaupon Capital, D E Shaw, and Millennium Management were also bullish on Tellurian Inc. (NASDAQ:TELL), allocating a large percentage of their portfolios to this stock.

Due to the fact that Tellurian Inc. (NASDAQ:TELL) has faced a decline in interest from the smart money, it’s safe to say that there exists a select few fund managers who were dropping their full holdings in the second quarter. It’s worth mentioning that Brian Olson, Baehyun Sung, and Jamie Waters’s Blackstart Capital dumped the biggest investment of all the hedgies monitored by Insider Monkey, worth about $18.2 million in stock, and Todd J. Kantor’s Encompass Capital Advisors was right behind this move, as the fund dropped about $11 million worth. These moves are intriguing to say the least, as aggregate hedge fund interest was cut by 7 funds in the second quarter.

Let’s go over hedge fund activity in other stocks – not necessarily in the same industry as Tellurian Inc. (NASDAQ:TELL) but similarly valued. We will take a look at The Cheesecake Factory Incorporated (NASDAQ:CAKE), Lattice Semiconductor Corporation (NASDAQ:LSCC), NMI Holdings Inc (NASDAQ:NMIH), and Tronox Holdings plc (NYSE:TROX). This group of stocks’ market valuations are closest to TELL’s market valuation.

As you can see these stocks had an average of 21 hedge funds with bullish positions and the average amount invested in these stocks was $209 million. That figure was $89 million in TELL’s case. The Cheesecake Factory Incorporated (NASDAQ:CAKE) is the most popular stock in this table. On the other hand NMI Holdings Inc (NASDAQ:NMIH) is the least popular one with only 19 bullish hedge fund positions. Compared to these stocks Tellurian Inc. (NASDAQ:TELL) is even less popular than NMIH. Hedge funds clearly dropped the ball on TELL as the stock delivered strong returns, though hedge funds’ consensus picks still generated respectable returns. Our calculations showed that top 20 most popular stocks among hedge funds returned 24.4% in 2019 through September 30th and outperformed the S&P 500 ETF (SPY) by 4 percentage points. A small number of hedge funds were also right about betting on TELL as the stock returned 6% during the third quarter and outperformed the market by an even larger margin.