Take-Two Interactive Software, Inc. (NASDAQ:TTWO) has experienced an increase in support from the world’s most elite money managers in recent months. TTWO was in 58 hedge funds’ portfolios at the end of the third quarter of 2018. There were 56 hedge funds in our database with TTWO positions at the end of the previous quarter. Our calculations also showed that TTWO isn’t among the 30 most popular stocks among hedge funds. Margate Capital said the following about TTWO in its Q3 investor letter:

“TTWO’s fiscal Q1 results/guidance which demonstrated a significant acceleration in TTWO’s recurring consumer spend even against an extremely difficult comparison; (2) enthusiasm building into TTWO’s October release of Red Dead Redemption 2, and (3) TTWO’s NBA2K 19 game was released in September to significantly higher yearover-year metacritic ratings. Take-Two is a video game developer that creates console-based video games at its studios Rockstar Games and 2K. We wrote in detail on our video games sector thesis and TTWO specifically in our Q2 letter”

What does the smart money think about Take-Two Interactive Software, Inc. (NASDAQ:TTWO)? 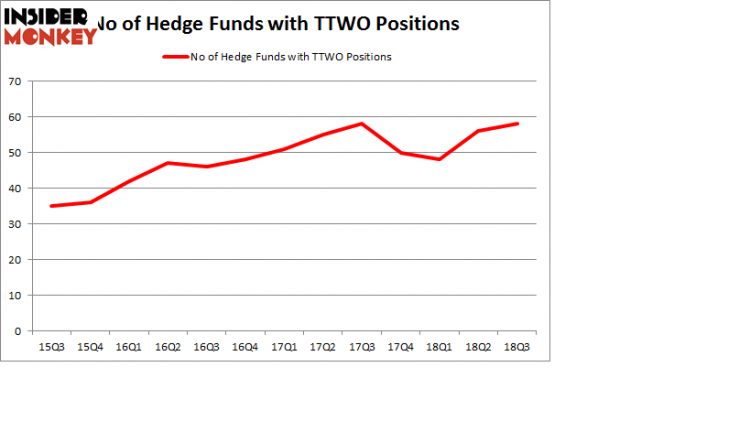 According to Insider Monkey’s hedge fund database, Ken Griffin’s Citadel Investment Group has the biggest position in Take-Two Interactive Software, Inc. (NASDAQ:TTWO), worth close to $264.8 million, corresponding to 0.1% of its total 13F portfolio. Sitting at the No. 2 spot is Eminence Capital, led by Ricky Sandler, holding a $141 million position; 2.3% of its 13F portfolio is allocated to the company. Some other professional money managers that are bullish consist of Josh Resnick’s Jericho Capital Asset Management, Paul Marshall and Ian Wace’s Marshall Wace LLP and Panayotis Takis Sparaggis’s Alkeon Capital Management.

As you can see these stocks had an average of 25.5 hedge funds with bullish positions and the average amount invested in these stocks was $683 million. That figure was $2.34 billion in TTWO’s case. Maxim Integrated Products Inc. (NASDAQ:MXIM) is the most popular stock in this table. On the other hand Host Hotels and Resorts Inc (NYSE:HST) is the least popular one with only 21 bullish hedge fund positions. Compared to these stocks Take-Two Interactive Software, Inc. (NASDAQ:TTWO) is more popular among hedge funds. Considering that hedge funds are fond of this stock in relation to its market cap peers, it may be a good idea to analyze it in detail and potentially include it in your portfolio.