Is Sprint Corporation (S) A Good Stock To Buy ?

We know that hedge funds generate strong, risk-adjusted returns over the long run, therefore imitating the picks that they are collectively bullish on can be a profitable strategy for retail investors. With billions of dollars in assets, smart money investors have to conduct complex analyses, spend many resources and use tools that are not always available for the general crowd. This doesn’t mean that they don’t have occasional colossal losses; they do (like Peltz’s recent General Electric losses). However, it is still a good idea to keep an eye on hedge fund activity. With this in mind, as the current round of 13F filings has just ended, let’s examine the smart money sentiment towards Sprint Corporation (NYSE:S).

Is Sprint Corporation (NYSE:S) the right investment to pursue these days? Prominent investors are in a bearish mood. The number of bullish hedge fund bets fell by 2 lately. Our calculations also showed that S isn’t among the 30 most popular stocks among hedge funds (click for Q3 rankings and see the video below for Q2 rankings).

Unlike the largest US hedge funds that are convinced Dow will soar past 40,000 or the world’s most bearish hedge fund that’s more convinced than ever that a crash is coming, our long-short investment strategy doesn’t rely on bull or bear markets to deliver double digit returns. We only rely on the best performing hedge funds‘ buy/sell signals. Let’s review the new hedge fund action surrounding Sprint Corporation (NYSE:S).

At Q3’s end, a total of 23 of the hedge funds tracked by Insider Monkey held long positions in this stock, a change of -8% from one quarter earlier. On the other hand, there were a total of 20 hedge funds with a bullish position in S a year ago. With hedgies’ positions undergoing their usual ebb and flow, there exists an “upper tier” of notable hedge fund managers who were increasing their stakes substantially (or already accumulated large positions). 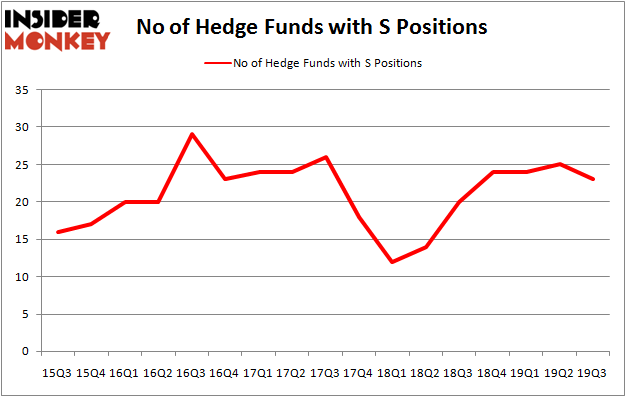 The largest stake in Sprint Corporation (NYSE:S) was held by Renaissance Technologies, which reported holding $520.5 million worth of stock at the end of September. It was followed by Magnetar Capital with a $120.3 million position. Other investors bullish on the company included Paulson & Co, Alpine Associates, and Arrowstreet Capital. In terms of the portfolio weights assigned to each position Magnetar Capital allocated the biggest weight to Sprint Corporation (NYSE:S), around 3.06% of its 13F portfolio. HighVista Strategies is also relatively very bullish on the stock, setting aside 2.78 percent of its 13F equity portfolio to S.

Due to the fact that Sprint Corporation (NYSE:S) has faced bearish sentiment from the aggregate hedge fund industry, we can see that there was a specific group of fund managers who sold off their entire stakes heading into Q4. At the top of the heap, Farallon Capital said goodbye to the largest investment of the 750 funds watched by Insider Monkey, comprising an estimated $70.1 million in stock, and Michel Massoud’s Melqart Asset Management was right behind this move, as the fund sold off about $14.6 million worth. These transactions are important to note, as aggregate hedge fund interest dropped by 2 funds heading into Q4.

As you can see these stocks had an average of 34.75 hedge funds with bullish positions and the average amount invested in these stocks was $1437 million. That figure was $886 million in S’s case. Lululemon Athletica inc. (NASDAQ:LULU) is the most popular stock in this table. On the other hand Realty Income Corporation (NYSE:O) is the least popular one with only 16 bullish hedge fund positions. Sprint Corporation (NYSE:S) is not the least popular stock in this group but hedge fund interest is still below average. This is a slightly negative signal and we’d rather spend our time researching stocks that hedge funds are piling on. Our calculations showed that top 20 most popular stocks among hedge funds returned 37.4% in 2019 through the end of November and outperformed the S&P 500 ETF (SPY) by 9.9 percentage points. Unfortunately S wasn’t nearly as popular as these 20 stocks (hedge fund sentiment was quite bearish); S investors were disappointed as the stock returned -4.1% during the first two months of the fourth quarter and underperformed the market. If you are interested in investing in large cap stocks with huge upside potential, you should check out the top 20 most popular stocks among hedge funds as 70 percent of these stocks already outperformed the market in Q4.

Hedge Funds Welcomed Medallia, Inc. (MDLA) With Open Arms
Monthly Newsletter Strategy
Download a free copy of our newsletter and see the details inside!
Hedge Fund Resource Center
Related News
Sprint Corporation (S): Are Hedge Funds Really Bullish About This Stock? Chevron, Sprint, Ocular Therapeutix, and More: Why These Stocks Are in the Spotlight Here is What Hedge Funds Think About Sprint Corporation (S) Hedge Funds Are Buying Sprint Corporation (S) 10 Companies with the Worst Customer Service in 2017 Wondering What’s Happening in the Financial Markets Today? Take a Look at These 34 Stories! Markets Snapshot: 34 Key Stories To Read About The Financial Markets Today 20 Countries With Highest Military Spending In The World 10 Countries That Smoke The Least 10 Highest Paid CEOs in the World in 2019
Billionaire Hedge Funds